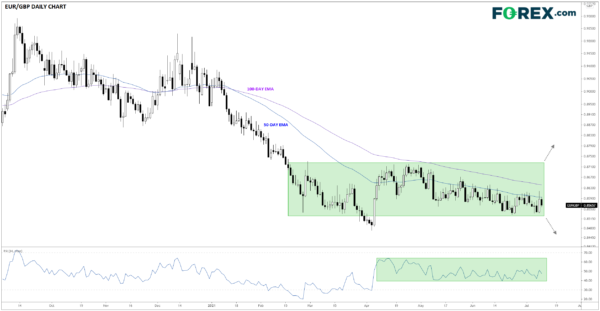 Q2 US earnings season kicks off in earnest this week, and it will undoubtedly be one of the biggest storylines to watch over the next couple of weeks.

The biggest market storyline of the past week was undoubtedly around the idea that the global economy may be at, or even past, “peak inflation.” From the resurgence of the delta variant to worst one-week slide in 10-year treasury yields in more than a year to China easing monetary policy on the back of a soft inflation reading, traders across the globe all woke up to the risk that price pressures may soon peak at once.

Looking at the data, so-called “base effects” from comparing economic data from this more “normal” economic environment to last year’s deep recession should start to fade soon, and both the 5- and 10-year market-implied US inflation rates peaked back in May, so there’s reason to believe that price pressures could fade in the coming months. As long as inflation data doesn’t re-accelerate, the market may continue to come around to the Fed’s (and other major central banks’) opinion that price pressures are more transitory, potentially giving Jerome Powell and company some leeway to delay tapering and eventual interest rate hikes if necessary.

Below, we highlight some of the key themes, reports, and charts to watch in the coming week:

The global spread of the more infectious delta variant of the COVID-19 virus remains a critical area of focus for traders. The variant has now been identified in more than 100 countries, including those with high vaccine rates, and it even forced Tokyo to declare a state of emergency and prohibit spectators from this month’s Olympics as COVID cases hit a 2-month high in country.

For traders who had written off the virus amidst widespread vaccine availability (at least in the developed world), last week’s delta-driven setbacks served as a stark reminder that COVID isn’t done disrupting lives and livelihoods. Readers should expect the continued ebb and flow of the virus to drive traders’ appetite for risk assets throughout the rest of the year and beyond.

With Tokyo in lockdown, the Bank of Japan is certainly more likely to lean dovish at its meeting later in the week, but both the Bank of Canada and Reserve Bank of New Zealand have reasons for optimism around their economies. Indeed, a New Zealand bank came out earlier this week with a call that the RBNZ could be looking to raise interest rates later this year if the economy continues to perform well, so we’ll be watching for signs of optimism from both those commodity-driven central banks.

As we noted in last week’s report, US government bond yields are one of the most important indicators to watch…and the price action over the last week proved that warning prescient. The yield on the benchmark 10-year US treasury bond fell 12bps last week, one of the worst one-week slides in a year, as traders worried that perhaps the Fed’s “transient” view of price pressures was correct after all and that we may be past peak inflation fears, even if the next couple months’ worth of inflationary figures remain elevated. Ongoing weakness in US bond yields, if seen, would continue to support growth stocks, gold prices, and the broader commodity complex, potentially at the expense of the US dollar.

Q2 US earnings season kicks off in earnest this week, and it will undoubtedly be one of the biggest storylines to watch over the next couple of weeks. With “Main Street” reopening in fits and starts, traders will be keen to see the latest results from the US banks in particular, with results expected from JP Morgan, Wells Fargo, Goldman Sachs, Bank of America, Citigroup, and Morgan Stanley among others. In addition to those, traders will also watch results from Pepsico, Taiwan Semiconductor, and Burberry.

The macroeconomic calendar also picks up this week, with a number of secondary central banks conducting their regular monetary policy meetings and some key data releases out of the US (CPI, PPI, and Retail Sales), UK (CPI), Australia (Employment), and China (Q2 GDP). As for the central banks, concerns about the delta variant and ongoing labor market recovery will likely yield little in the way of immediate changes, but it will be worth watching the gatherings of the Reserve Bank of New Zealand, Bank of Canada, and Bank of Japan for their latest economic outlooks nonetheless.

Chart of the Week: EUR/GBP

You had to know we’d take any opportunity we could to promote England’s first appearance in a major tournament final in 55 years, right?

Three Lions fans (and Azzurri fans for that matter) better hope their squad doesn’t come out as lethargic as the price action has been in EUR/GBP over the last six months or so. Putting aside a one-week foray below 0.8500 in early April, the European cross has been constrained to a tight 200-pip consolidation range between 0.8525 and 0.8725. These lackluster trading conditions have no doubt frustrated bulls and bears alike, but experienced traders know that volatility is cyclical, meaning that periods of low volatility and little movement in a market is typically followed by a higher-volatility move when prices eventually break out. Astute readers will be monitoring those two levels, along with the equivalent range in the 14-day RSI indicator, to identify a potential trade opportunity in the week(s) to come: While the economic calendar is fairly quiet this week, with only Wednesday’s UK CPI report likely to have a noteworthy impact on the pair, traders should nonetheless keep an eye on EUR/GBP; after all, we tend to see the most impressive market moves just when trader apathy peaks!

Have a great weekend and best of luck with your trading!