Week Ahead: Earnings Season in Full Swing as the Delta Variant of the Coronavirus Wreaks Havoc 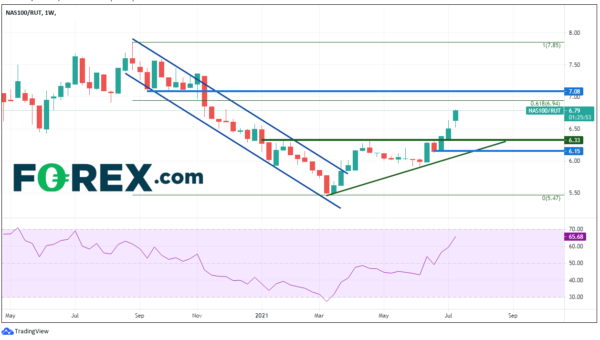 While last week was full of economic data and central bank meetings, this week will be lighter on both fronts.  Major central bank meetings are limited to the ECB this week.  Economic data will be light, highlighted by PMIs at the end of week.  As the UK has its “Freedom Day” unlocking on Monday, cases are on the rise there and other places around the world.  Will countries be forced to lockdown again?  One of those countries with increasing cases is Japan, particularly in the city of Tokyo where the “2020” Olympics are set to begin on Friday.  Also, with bank earnings out last week, its time to move onto tech with the first of the FAANGs reporting on Tuesday.  Traders will be paying close attention to the guidance to see if CEOs agree with Fed Chairman Powell that inflation is transitory!

The RBNZ announced last week that they will be ending their Large Asset Purchase Program and traders quickly began pricing in a rate hike by the end of the year.  In addition, New Zealand CPI for Q2 was released and it was much stronger than expected.  Some traders are now looking for a rate hike at the RBNZ’s next meeting in mid-August.  Similarly, the Bank of Canada tapered their QE program from C$3 billion per week to C$2 billion per week.  In the US, CPI for June was released last week at 5.4% YoY, the highest since August 2008, while the Core CPI was 4.5% YoY, the highest level since 1991!  And did we mention that PPI was 7.3% YoY, the highest since the current series began in 2010!  Are you sensing a theme?  The ECB meets this week.  With a change in inflation targeting of “symmetrical 2%”, rather than close to 2%, the ECB has told us they are looking for 2.5% inflation into the end of the year, which then will moderate to 2% next year.  The change in wording should reflect this.

Powell may have to react

Enter Fed Chairman Jay Powell, who testified before Congress in his semi-annual report on the economy.  The Fed Chairman said that “substantial further progress” is a ways off.  Inflation will be moderate but will likely remain elevated this year.  In other words, current inflation is transitory.  He also noted that the jobs market is still a long way off from progress needed to begin tapering bond purchases.  The FOMC meets again on July 28th.  Powell says the committee will continue talking about the timing of tapering. However, based on last week’s testimony, it doesn’t seem like tapering will begin any time soon. Is Powell right about inflation?  A majority of the CPI print was because of an increase in the prices of used cars.  Surely used car prices can’t continue to rise at 10% a month!  Powell has indicated previously that the committee will be looking for sustainable, actual data (primarily employment data) and that they will let inflation “run hot” in order to reach those levels before they begin to taper.  The question  for committee members will be:  When Is inflation too hot?

Monday is “Freedom Day” in the UK, when the reopening will occur in all its glory!  No more social distancing and no more masks.  All nightclubs and businesses that have been closed will reopen.  The unlocking had been pushed back a month to allow most of the country to receive vaccinations.  However, scientists are weary of the reopening as the UK reported 51,870 new coronavirus cases, the biggest one day increase since January.  Economists are weary of not reopening as it will cause more financial burden.  The world will be watching closely to see if there is a significant number of new cases after Monday.  The variant is rampant in other parts of the world as well.  On Friday, the Netherlands has its biggest one day increase since December.  Russia reported 799 new deaths, the most on record.  Australia, which was hailed for controlling the original coronavirus now has areas on lockdown, such as Sydney and Victoria.  All eyes will be on the UK over the next month!

Japan is also dealing with new daily increases of coronavirus cases.  However, the Summer 2020 Olympics will go on, despite Tokyo being in a State of Emergency until mid-August.  Opening ceremonies will be on Friday, however, there will only be a small number of delegates in attendance.  Athletes may not be there either, as some are required to arrive only days before their events and leave soon afterwards.  Some athletes fear the coronavirus may spread through hotels, though most have elected vaccinations.  As a country, only 8% of Japan’s population was vaccinated as of June 28th.  As with the UK reopening, the Olympics will be watched to see if the event turns into a super-spreader.

It’s that time of year again: earnings season!  Lately, everyone wants to know how much earnings will beat estimates by.  Its not even a matter of “if” they will be earnings.  With re-openings occurring at various times during Q2, earnings among the big retail names should be strong.  As you may have noticed, stock markets are at or near all time highs.  Will earnings season be a “buy the rumor, sell the fact” event?  Traders will be watching guidance to see if companies believe they can maintain their current level of earnings, or if they will be looking for a slowdown in the next few quarters. (A peak in growth?). Along with the first of the FANNGs to report, NFLX, other notables are as follows:  IBM, UAL, NFLX, UBS, EZJ, KO,VZ, TXN, JNJ, T, BIIB, BX, INTC, TWTR, SNAP, ULVR

Except for the ECB on Thursday and the PMIs on Friday, this is one of the slowest weeks of the year in terms of economic data.  Other notable economic releases are as follows:

Chart of the Week: Weekly NAS100/RUT We looked at this chart earlier in the year as the NAS100/RUT was moving lower in an orderly channel from the week on August 31st.  If the ratio is moving lower, the Russell 2000 is outperforming the Nasdaq 100.  If the ratio is moving higher, the NASDAQ 100 is outperforming the Russell 2000. Back in September 2020, traders assumed that as the ratio moved lower, the pandemic was over. Smaller companies and mom-and-pop businesses (Russell) began to outperform the stay-at-home stocks (NASDAQ).   The ratio then began moving higher as Nasdaq 100 began to outperform the Russell 2000 in late March.  It then traded sideways, under resistance at 6.33 for the next 3 months.  Finally, during the last week of June, the ratio finally broke above 6.33 and has been gapping higher since. Resistance is at the 61.8% Fibonacci retracement level from the August 31st highs to the March 15th lows, near 6.94.  Horizontal resistance crosses above there near 7.08 and then the August 31st highs at 7.85.  Support is at the previous resistance level of 6.33, just above the upward sloping trendline and horizontal support near 6.15.

With the light economic calendar this week and only the ECB meeting, focus will also be on the UK unlocking and Summer 2020 Opening Ceremonies of the Olympics.  Although these aren’t necessarily economic events, the results could have an impact on the markets. If either or both events turn out to be super-spreaders, Powell may be right after all regarding the delay in tapering!