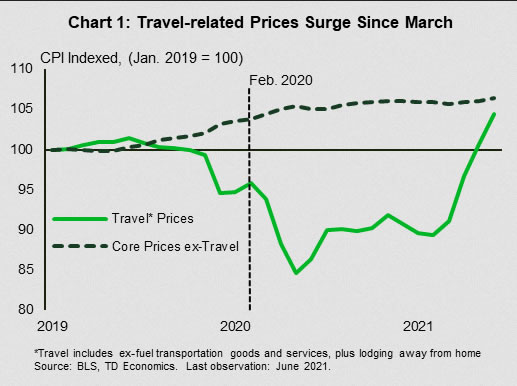 U.S. – Consumers are Heading Out and Paying Up

The U.S. data calendar heated up this week, and there is no hotter metric these days than inflation. With the annual pace of core inflation nearing a 30-year high (see commentary), Fed Chair Powell was on the hot seat in Congress, facing a barrage of questions about what the Fed is doing about it. Powell acknowledged that inflation is running well above the pace the Fed typically likes to see. He reiterated previous messaging that the Fed views it is a shock associated with the reopening of the economy – led by pandemic-related bottlenecks and one-time increases in the price of certain services.

However, he did acknowledge that there could be other areas where price pressures bubble up to replace the current sources of price pressures, and the Fed is watching it closely. He stated he doesn’t think we will have to wait long to find out if the Fed’s interpretation is accurate. He was humble that re-opening shuttered parts of an economy at this scale is unprecedented, and forecasts are particularly uncertain.

Looking at recent months, the biggest price increases have been in “things associated with travel.” After a year staying close to home, Americans are getting on the road again. Demand for travel-related goods and services is outstripping the industry’s ability to ramp up, and the price increases are steep. Semiconductor shortages have pushed up prices for both new and used vehicles, with knock-on effects on car rental prices. At the same time, prices for hotels, airfares and car rentals are recovering from price plunges early in the pandemic.

Since March, these travel related price increases have accounted for over half of the monthly increase in core inflation, despite accounting for less than 18% of the core inflation basket. Stripping them out would have left core inflation running around 0.2% m/m since March (Chart 1). We wouldn’t expect these monthly price hikes to go on forever, but as Powell pointed out, other areas could perk up. Medical care inflation has been decelerating sharply after big increases in 2019, and could accelerate once again. Shelter inflation, ex-hotels also decelerated earlier in the pandemic but is showing early signs of firming. There is plenty to keep an eye on when it comes to inflation.

Evidence of shifting consumer patterns as the economy reopens was also seen in the June retail numbers. Overall sales rose 0.6% month/month, ahead of market expectations (see commentary). Sales at bars and restaurants and clothing and accessory stores were both up strongly – categories that could be labelled “going out.” Looking at the trend in this “going out” category, spending started to surge in March, and is now above pre-pandemic levels. On the flip side, spending on things related to staying home – furniture, building materials and sporting goods and hobbies has fallen since March (Chart 2). And, the retail sales numbers do not include spending on other affected services, like haircuts. We will need to wait until the June personal income and spending numbers are released at the end of the month to see how quickly services as a whole are rebounding. 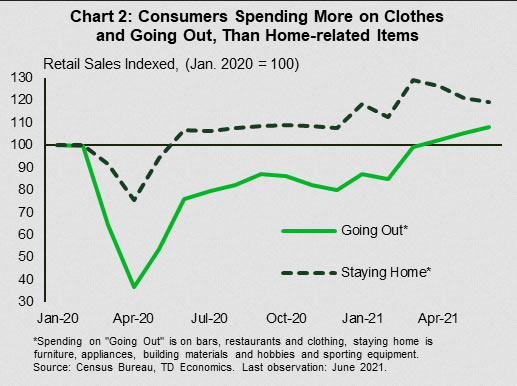 The big story this week was the Bank of Canada’s interest rate announcement and accompanying Monetary Policy Report (MPR). As expected, the Bank left the overnight rate unchanged but announced a further tapering in its purchases of government bonds to $2 billion per week (from $3 billion previously).

The downgrade to 2021 was more than offset by an upgrade to real GDP growth in 2022 (to 4.6% from 3.7%). Growth is expected to be led by consumer spending (advancing by 3.6%). A key question on that front is how much of the savings accumulated over the last year and a quarter of the pandemic will be spent as life returns to normal. The MPR noted that when asked, households report that they intend to spend at least some of their nest egg, with the portion increasing with income. The Bank has built in an expectation that overall, 20% of these savings make their way into spending, contributing to the forecast upgrade.

The other notable area of the central bank’s forecast to be upgraded was inflation. This will not come as a surprise to anyone who has been following the news. Inflation has come in well above expectations due to the combination of supply constraints and surging demand for goods. Notably, Canada’s inflation rate has not been as high as the U.S. (Chart 1) in part reflecting earlier re-opening stateside, but also a strengthening Canadian dollar over the past year that has weighed on import prices (see report). 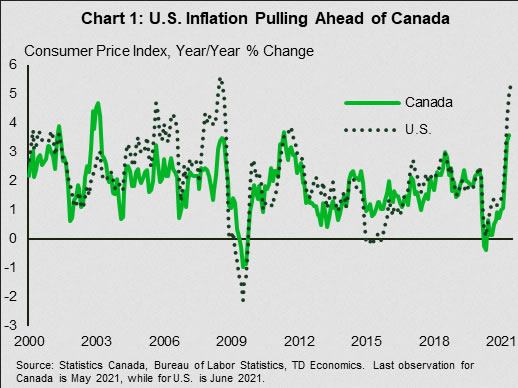 The loonie has given up some of those gains in recent weeks – falling as low as 79 cents U.S. this week – in part due to that greater surge in inflation stateside, which has moved forward expectations for Fed tightening. A slightly lower exchange rate will not be unwelcome by the Bank of Canada.

The Bank continues to characterize the inflation outlook as largely reflecting transitory factors. Still, in its commitment to leaving interest rates on hold until the output gap is fully closed, (which it does not expect until the second half of 2022), it has also raised its expectations for inflation over the medium term (2023) to 2.4%. This, of course, is above the mid-point of the Bank’s 1% to 3% target range for inflation, but consistent with their forward guidance and commitment to ensuring the economic recovery is fully cemented.

Another consideration for the Bank of Canada is the amount of heat generated in the nation’s housing market. On that front, they may be pleased with the apparent slowdown in activity over the past few months. Existing home sales have fallen 25% since their peak in March. Sales are still elevated relative to history and supply is low. A gradual unwind of recent excesses is a best case scenario. 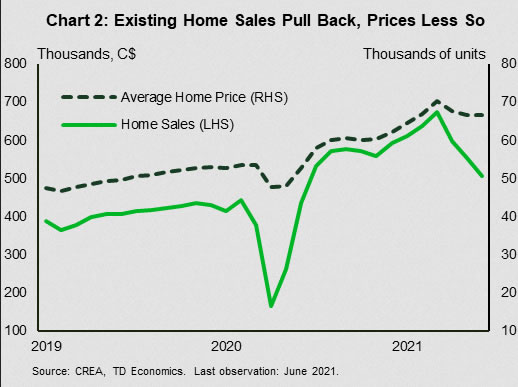