Dollar’s selloff caught much attention last week, but slowed towards the end. Traders are holding their bets for now, awaiting the coming batch of July data. Indeed, Australian Dollar was the worst performer, mainly on RBA QE expectations, and partly on risk aversion in China and Hong Kong. New Zealand Dollar was the second worst, followed by the greenback.

Sterling was in the leading post much of the week on improving delta variant infection numbers. Though, Swiss Franc secured the top spot with a late dash. Euro was also firm, indicating that European majors are having an upper hand for now. Yen and Canadian Dollar ended mixed only.

We’d argue that there is prospect of more Dollar weakness ahead as the near term trend is reversing, even though not confirmed. But Aussie would be a currency to avoid in case of more Dollar decline. Swiss Franc is more likely a better option than not, considering it’s relative strength against Euro and Sterling.

Dollar dropped notably but hesitated ahead of key data

Dollar dropped notably last week but sellers seemed to hesitate towards the end. FOMC acknowledged that “the economy has made progress toward” the maximum employment and price stability goals. But chair Jerome Powell noted the job markets still had “some ground to cover” while rate hikes were “a ways away”. There were ongoing discussions over tapering, without further hints on the timing of actually doing in. The greenback will look into the batch of key economic data like ISMs and non-farm payrolls this week for the next move.

Dollar index’s fall to 91.78 suggests short term topping 93.19. Immediate focus is now on 55 day EMA (now at 91.85) this week. Sustained trading below there should confirmation completion of the rise from 89.53. More importantly, the consolidation pattern from 89.20 could have completed in a three-wave structure too. Deeper decline would be seen back to retest 89.20/53 support zone.

On the other hand, rebound from current level could extend the consolidation pattern with another rise through 93.43 resistance. But even in this case, we’d expect strong resistance from 38.2% retracement of 102.99 to 89.20 at 94.46 to limit upside. 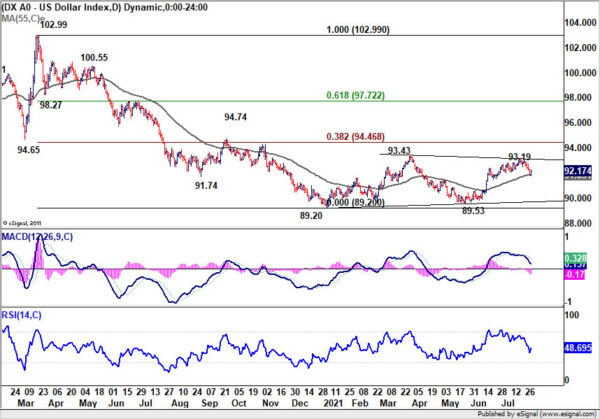 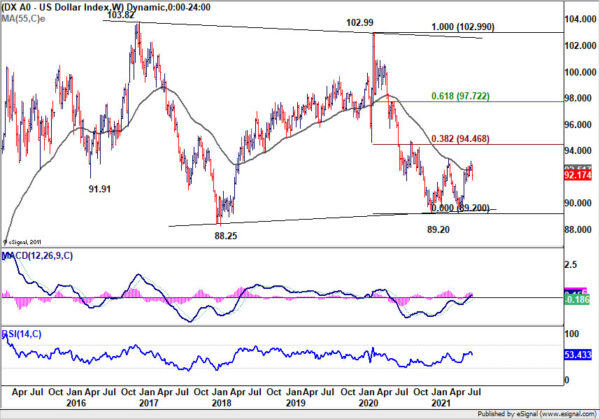 Gold failed the attempt to break through 1833.91 resistance last week and retreated notably before close. Some support could be seen around 4 hour 55 EMA (now at 1810.63). Strong rebound from current level, followed by break through 1833.91, would confirm resumption of whole rise from 1750.49. Next target is 61.8% retracement of 1916.30 to 1750.49 at 1852.96. Sustained break there would bring strong rise through 1916.30 resistance. Such development, if happens, would double confirm Dollar’s near term bearishness. 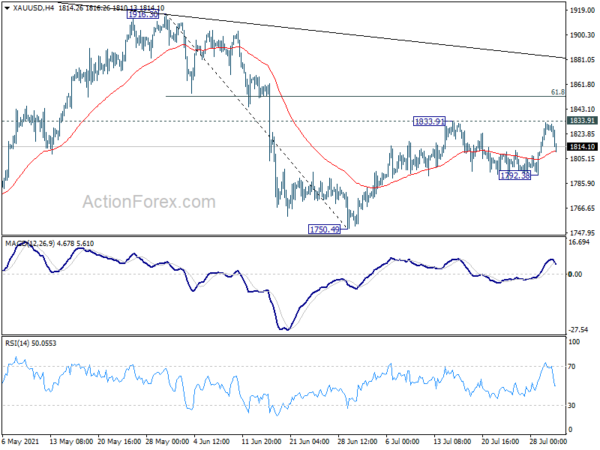 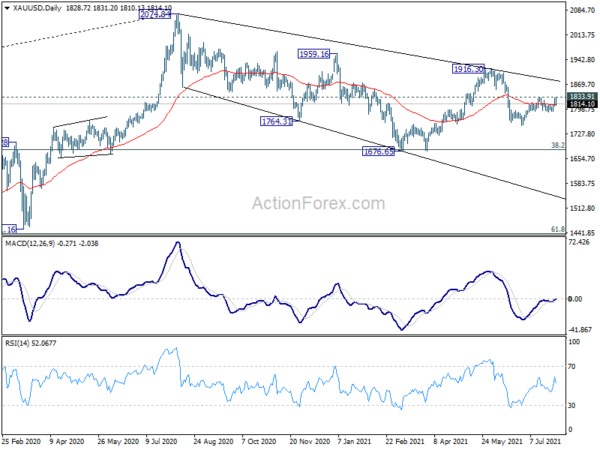 Aussie to underperform as RBA would increase QE, rather than taper

In terms of buying against Dollar (should the selloff intensify), Aussie is likely a currency to avoid. Due to extended lockdown in New South Wales, there are increasing expectations that RBA would raise the weekly asset purchases to AUD 6B, instead of tapering. The announcement could come as early as this week.

Aussie is clearly weaker against other commodity currencies, not to mention Europeans. AUD/NZD’s decline resumed after some consolidations and hit as low as 1.0515 so far. Near term outlook will stay bearish as long as 1.0605 resistance holds. Fall from 1.0944 is seen as the third leg of the pattern from 1.1042. Deeper decline would be seen to 1.0415 support next. 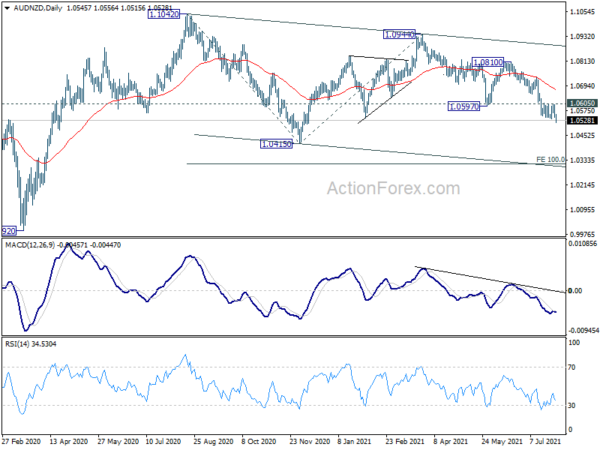 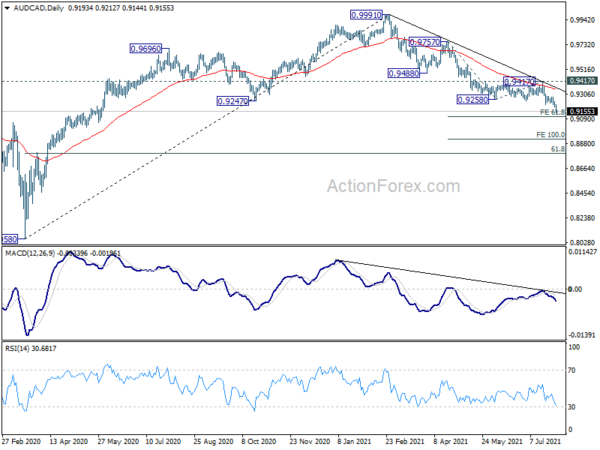 Swiss Franc buying came in ahead of August

On the other hand, Swiss Franc appears to be strengthening ahead of the traditionally volatile August. EUR/CHF extended the decline from 1.1149 to as low as 1.0740. Oversold condition in daily RSI is not slowing it down, but daily MACD actually suggests downside acceleration. 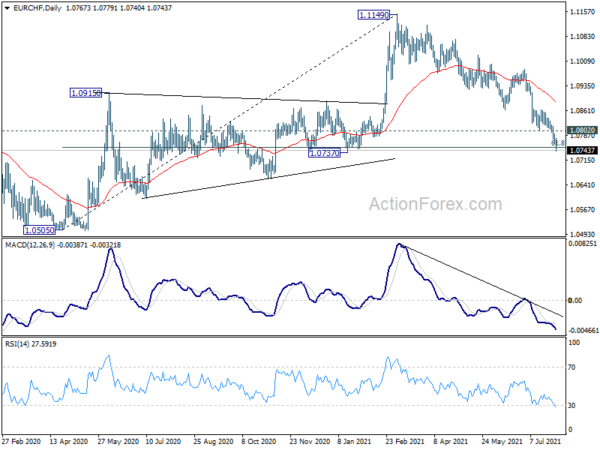 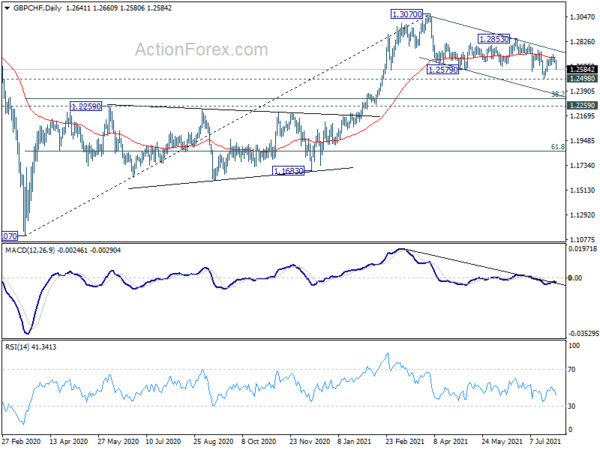 USD/CHF’s fall from 0.9273 resumed last week and reached as low as 0.9037. The development also affirm that rebound form 0.8925 has completed. Initial bias stays on the downside this week for retesting 0.8925 support. On the upside, above 0.9116 support turned resistance will mix up the near term outlook and turn intraday bias neutral first. 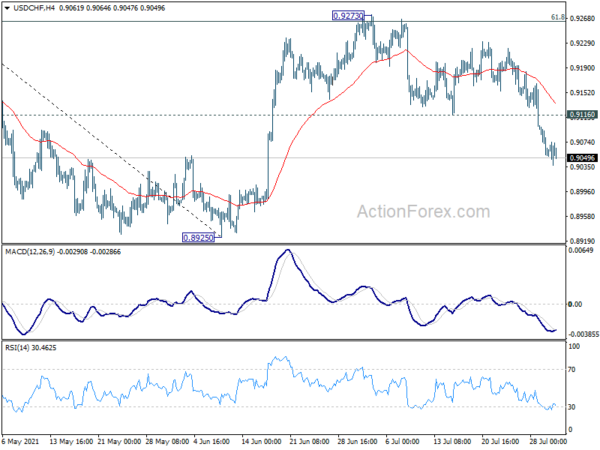 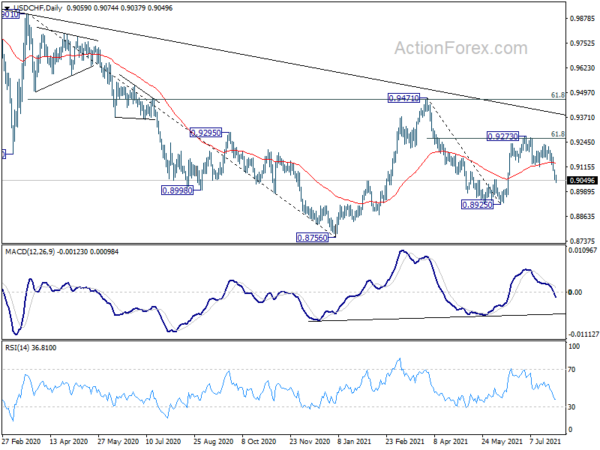 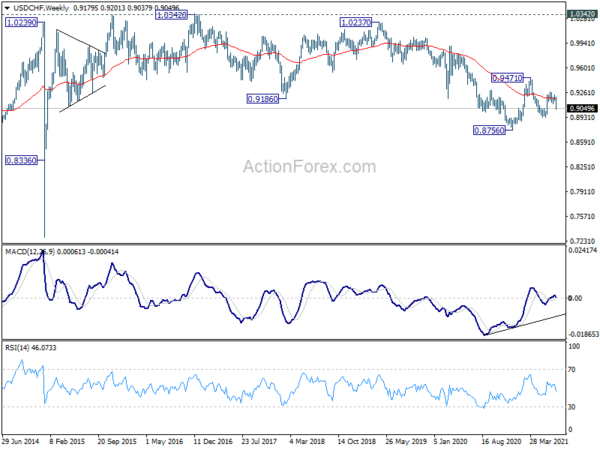 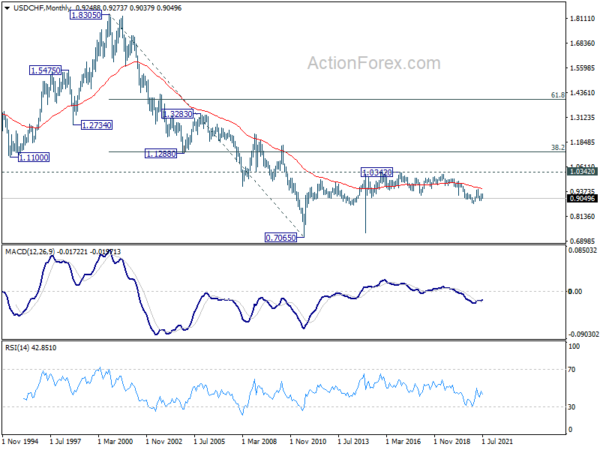