Four weeks ago, the Reserve Bank of Australia (RBA) claimed that the economy is in a good shape, and it would proceed with its bond tapering schedule as soon as September, despite the Covid uncertainty. On Tuesday, however, the Bank is expected to awkwardly postpone its tapering pledge and show commitment to support the economy as new lockdown measures threaten the recovery phase. The policy announcement will be published at 01:30 GMT.

From success to failure

Australia has been an example of success of how to suppress Covid infection cases during the worst times of the pandemic, forcing immediate lockdowns, screening visitors and shutting borders to the outside world to provide a Covid-free environment inside the country. Almost a year after though, the country is looking to go from success to failure as its slow vaccination program, which has so far injected only 15.4% of the population with the two doses, and is still lagging many other developed economies, suggests a larger exposure to the dangerous delta variant and a prolonged period of lockdowns until the country achieves a much higher vaccination coverage.

The above is now creating some questions whether the Reserve Bank of Australia will be able to keep its word over its September’s bond tapering plans when it concludes its policy meeting tomorrow. During July’s gathering, the central bank left its benchmark interest rate steady at a record low of 0.1% and its yield curve control unchanged but introduced plans to reduce the size of its weekly government bond purchases to A$4 billion from the current level of A$5 billion at the completion of the program early in September, as policymakers saw the economy performing better than expected.

Given the negative consequences the latest restrictions in Sydney and Melbourne could have on the labor market, and hence on economic growth in the coming months, monetary tightening actions during the start of a new wave of infections would not be a wise move to make, although CPI inflation has surged above the 2-3% target to peak at 3.8% y/y in Q2 and the unemployment rate inched down to 4.9% in June. As regards inflation, the RBA will probably insist that the breakout from the target range is transitory and headline CPI could return below 2.0% in the next years. 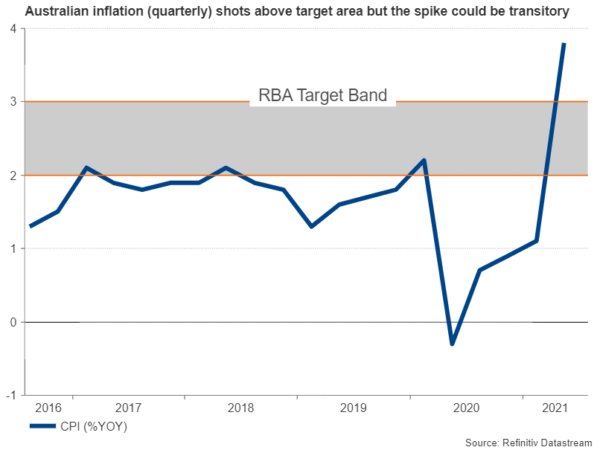 On the other hand, postponing the tapering phase and adopting a wait-and-see mode would not be politically inconsistent since the RBA’s governor has already telegraphed that weekly bond purchases will be adjusted, up or down, according to economic circumstances. Hence, a pause in those plans or even an increase to A$6 billion in weekly bond purchases as some investors price in, as well as an extension of the yield curve control to November 2024, which was previously avoided, would not make the Bank less credible amid the gloomy Covid situation.

Reaction in the aussie

Still, any kind of delay could hammer the aussie, especially if the RBA also delivers a dovish speech to highlight the risks surrounding the export-oriented Australian economy and perhaps to justify any potential increases in the weekly bond engagement to support the economy. In this case, aussie/dollar could drift lower to retest the eight-month low of 0.7288, a break of which could stretch the ongoing downtrend towards the 0.7255 – 0.7230 support region.

Alternatively, if the Bank maintains its current policy settings intact, delivering an encouraging message that the economy has the ability to bounce back quickly as it did in the previous lockdown periods, aussie/dollar could push for a close above the 0.7400 resistance territory and the 20-day simple moving average (SMA).

Overall, however, the larger the policy divergence with other key central banks is, such as the Reserve Bank of New Zealand, the Bank of Canada and the Fed, the heavier the downside pressures on the aussie could be in the coming months.