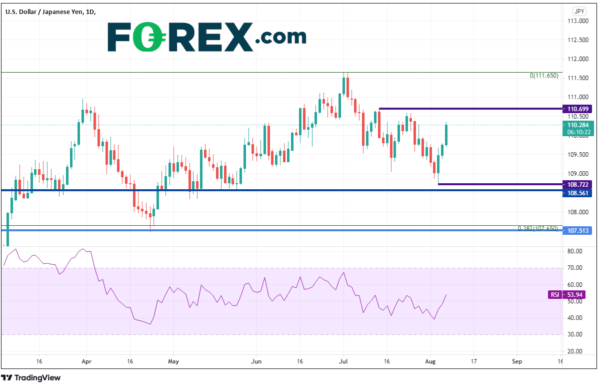 The US Federal reserve should be very happy with this data.  The FOMC mentioned in their most recent meeting that progress has been made towards achieving their goals for tapering.  However, since then, several Fed speakers, including Powell himself at the press conference, have indicated that they will need several months of strong employment data to indicate that they will announce tapering.  This alone says that a Jackson Hole announcement of tapering is unlikely.  However, the strength of today’s NFP does open the door ever so slightly for that possibility.  Comments from fed speakers this week could provide clues as to when the tapering announcement will come.  For your guide, the Jackson Hole Symposium is August 26th-28th, 2021. As the US Dollar moves higher, Gold (XAU/USD) is getting wacked. XAU/USD has broken below the downward sloping trendline from the August 2020 highs, near 1795, and is testing horizontal support and the 61.8% Fibonacci retracement from the March 29th lows to the June 1s highs near 1756/1770.  Below there, price has room to drop to the March 29th lows at 1679.  Resistance is at today’s highs of 1804.5, and then horizontal resistance at the recent highs near 1834. Today’s Non-Farm payroll data was strong, and it sent the US Dollar bid and caused Gold to move lower.  Incidentally, stock