Dollar Turned Around While Tapering Talks Heated Up Again

Dollar soared towards the end of the week as the stellar job report should give Fed much confidence to start tapering later in the year. Reactions from stock markets and yields were also positive, with DOW and S&P closing at new records while 10-year yield rebounded. Together with the steep fall in gold, overall development supports first rally in Dollar ahead, at least for the near term.

Nonetheless, Dollar’s strength was mainly seen against Euro, Swiss Franc and Yen. Aussie and Kiwi were in deed the strongest for the week while Euro and Swiss Franc were themselves the weakest. A key to watch now is whether comments from Fed officials could help push Dollar through recent resistance levels against Euro, as well as commodity currencies like Aussie, to solidify its momentum.

Fed moved a big step forward on tapering the asset purchase program with strong July non-farm payrolls job growth. Some officials like Governor Christopher Waller were clear that if job growth exceeds 800k in both July and August, then September is ready for a tapering announcement.

We’d expect more talks about the timing of tapering to come in the coming weeks, leading up to the Jackson Hole Symposium on August 26-28. Chair Jerome Powell might not be very clear on the tapering time by then, as August job numbers won’t be available yet. Also, there are still a lot of uncertainties over the spread of Delta variant and its impact on the economy. Nevertheless, more affirmative comments by him and other Fed officials could continue to give Dollar support.

Meanwhile, one more thing to be clear is that rate hike is a totally different topic to tapering. An early rate hike would really require inflation data proving itself rather non-transitory. For now, though, Fed funds futures are firmly pricing in nearly 60% chance of at least one hike by December 2022. 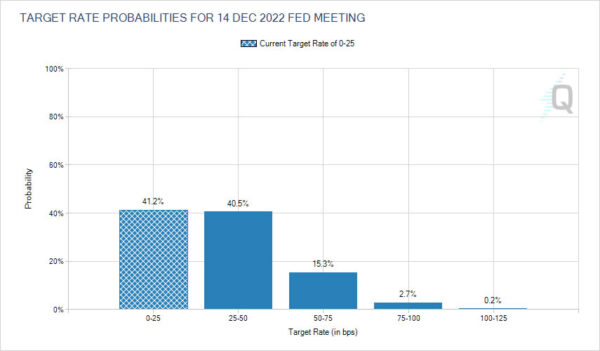 The US stock markets have indeed responded rather well to the strong job numbers and expectations on Fed tapering. Both DOW and S&P 500 closed at new records highs. In particular, it now looks like DOW is ready to stand firm above 35k handle to resume the long term up trend. 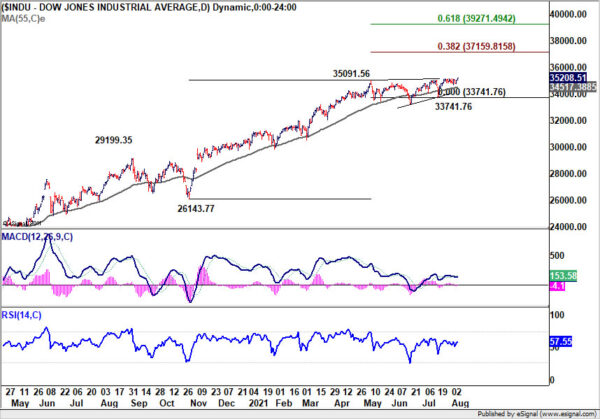 10-year yield also rebounded strongly on Friday. 50% retracement of 0.504 to 1.765 at 1.134 provided strong support once again. It’s likely to see TNX breaking through 1.134 firmly if the economy continues to improve. Instead, break of 1.420 resistance will suggest that correction from 1.765 has completed at 1.128. Stronger rise would then be see back to 1.765 resistance. Such scenario could happen when Fed shows more confidence on tapering in Q4, and talk of a rate hike next year heat up.