AUDUSD gained some positive traction after steadying in the well-established 0.7335 support region following Friday’s sharp selloff. The price is currently moving higher and the stochastics are also pointing up, suggesting there could be further moderate gains in the coming sessions.

However, the MACD histogram remains below zero and the red signal line continues to slope downwards. Moreover, price action is still far below the 50- and 200-period moving averages (MA) in the 4-hour chart, indicating no change to the negative picture in the short-to-medium term.

Neither is there any shift in the neutral bias in the very near term, with prices roughly hovering between the 0.7335 support and the 23.6% Fibonacci retracement of the June-July downleg after bouncing off the 8-month low of 0.7289 on July 21. The 23.6% Fibo of 0.7403 is proving to be a tough resistance area for AUDUSD as the price has had several unsuccessful attempts to break above it over the last 10 days.

To the downside, the July trough of 0.7289 is the next major target for sellers if the support around 0.7335 doesn’t hold. Breaking this as well would reinforce the bearish outlook, turning attention on the 0.7250 level.

To sum up, AUDUSD is gaining some positive momentum but its upside faces several challenges, while there’s not much standing in the way to the south for the downtrend to resume. 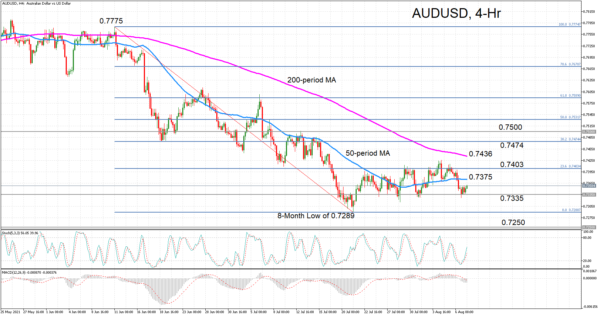