It’s an electrifying week, with a crucial central bank meeting and a storm of economic releases to spark volatility. The Reserve Bank of New Zealand will make history by raising interest rates. However, there is scope for some disappointment in the kiwi, as markets are pricing in a decent chance for a ‘double’ rate hike. Meanwhile, another round of normalization signals from the Fed could begin to reawaken ‘king dollar’.

RBNZ: Time for lift off

The main event will be the RBNZ meeting on Wednesday, when the central bank is widely expected to raise interest rates. There are clear signs that the New Zealand economy is overheating, so it is time for the Reserve Bank to step on the brakes.

Economic growth has been impressive lately, unemployment has returned to pre-crisis levels, inflation is high and rising, and the housing market is booming. Therefore, markets have fully priced in a quarter-point rate increase at this meeting, and are also assigning a 20% probability for a ‘double’ rate hike of a half-point. 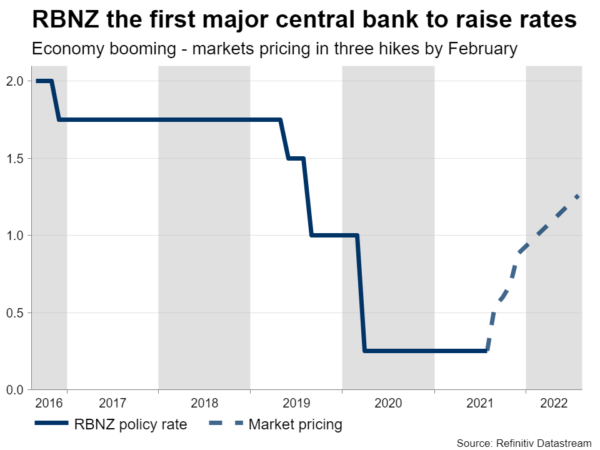 As for the kiwi, the initial reaction will depend on whether we see a single or a double rate increase. Most likely, it will be just a single. A double hike could shock the economy and it would also put massive upward pressure on the exchange rate, which the RBNZ wants to avoid. Plus, the global environment is still very fragile.

The central bank doesn’t need to pull the handbrake here, it only needs to step gently on the brakes. Interest rates can be raised again in October if everything goes well. In this case, the kiwi could take a hit as those looking for a double rate increase are left disappointed.

But in the bigger picture, the outlook for the currency is very bright. The economy is strong and the kiwi will soon enjoy higher interest rates, making it more attractive for carry trades, especially against the euro and yen. The only thing missing for an incredible rally is an improvement in the global outlook. 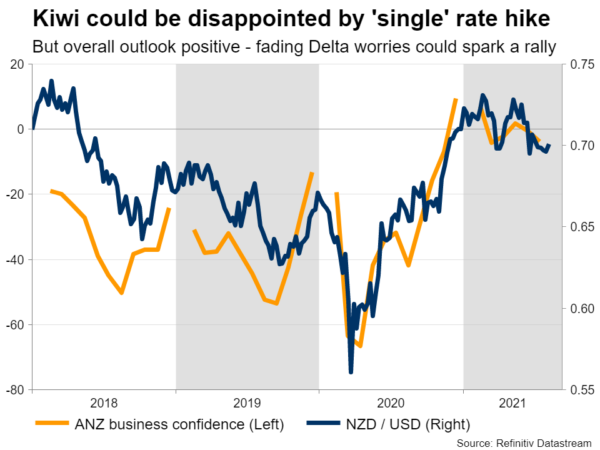 New Zealand is a small export-heavy economy after all, so for the kiwi to really go on a rampage, worries around global growth and the Delta variant have to fade a little.

Another dose of Fed tapering signals

Over in America, the ball will get rolling with the latest retail sales numbers and a speech by Fed chief Powell on Tuesday. Then on Wednesday, the central bank will release the minutes of its July meeting, where it signaled that the US economy had made progress, opening the door for dialing back asset purchases.

We have seen several FOMC officials lately – including Vice Chairman Clarida – getting behind the idea that the Fed should begin withdrawing liquidity soon. Inflation is scorching hot, consumption is off the charts, and the labor market is healing its wounds quickly. On top of everything, Congress is working on another multi-trillion spending package. 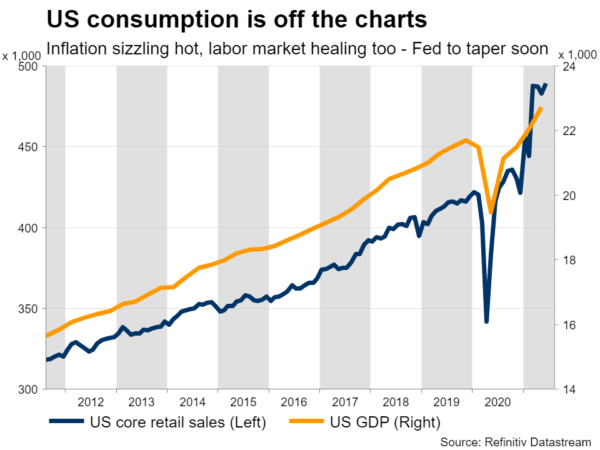 The minutes are likely to reflect this thinking, setting the stage for a formal tapering announcement in the coming months. Whether this is announced in September or November doesn’t matter much for the dollar.

What matters is that the Fed is years ahead of the ECB and the BoJ in the normalization game. Ultimately, this central bank divergence could allow US yields to rise faster than their European and Japanese counterparts, allowing the dollar to shine against the euro and the yen.

A barrage of UK releases

It’s also a packed week for British data releases. Employment stats for June are out Tuesday, ahead of inflation numbers for July on Wednesday and retail sales for the same month on Friday.

The UK economy is humming along nicely, with widespread vaccinations unchaining consumers and businesses. The only worry is what happens now that the government’s job-protecting programs are ending, risking a spike in unemployment. On the bright side, the Bank of England isn’t worried, amid countless reports that businesses are struggling to fill open job positions. 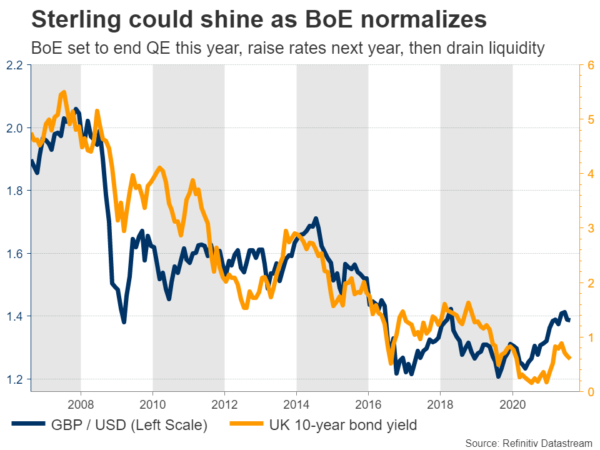 Indeed, the Bank recently signaled that it will probably raise rates next year. After two rate hikes, it plans to begin ‘quantitative tightening’, essentially draining liquidity out of sterling markets. That’s great news for the pound overall. When a central bank sucks liquidity out of the market, that ultimately pushes bond yields higher, making its currency more attractive.

In Australia, the minutes of the latest Reserve Bank meeting are out on Tuesday. Then on Wednesday, wage growth numbers for Q2 will be released, ahead of monthly jobs data for July on Thursday.

The Australian dollar got demolished lately as the nation went into strict lockdowns to battle the Delta outbreak. The economy will be hit hard, which might be reflected in the upcoming jobs data. The RBA won’t join the ‘rate hike club’ anytime soon, which is bad news for the aussie, especially in a climate of slowing growth in China due to Delta-related lockdowns. 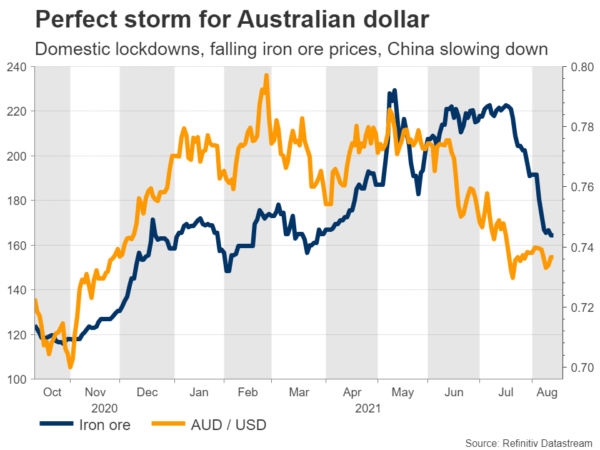 Over in Canada, inflation stats and retail sales for July will hit the markets on Wednesday and Friday, respectively. The nation enjoys a very high vaccination rate and the economy is doing well. As such, the Bank of Canada is already tapering its bond purchases. The overall picture for the loonie looks promising, although a lot will ride on oil prices.

In Japan, GDP numbers on Monday are expected to show the nation narrowly dodged a double-dip recession. That said, the economy is still struggling, as much of the country remains under a state of emergency. Reflecting this, inflation stats out on Friday are likely to confirm the nation is still trapped in deflation. 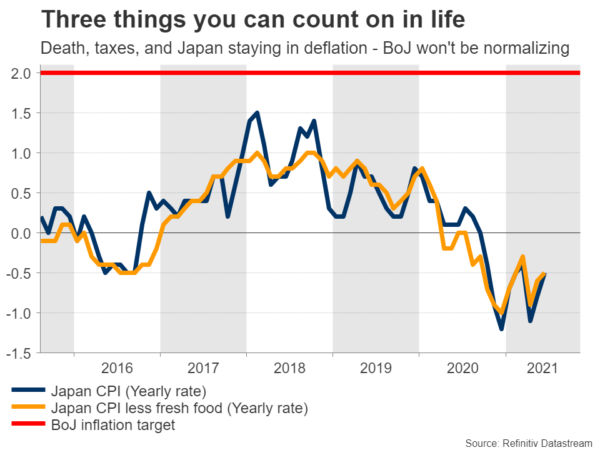 Therefore, the Bank of Japan won’t be taking its foot off the accelerator anytime soon. That spells downside risks for the yen moving forward, as foreign interest rates rise but Japanese ones don’t. Outside of an episode of panic in the markets, there isn’t much that can rescue the yen.

Meanwhile in China, the monthly data dump that includes retail sales, industrial production, and fixed asset investment for July will hit the markets on Monday. Finally, the Eurozone’s GDP print for Q2 will be released Tuesday, but this is the second estimate, which markets don’t react much to.