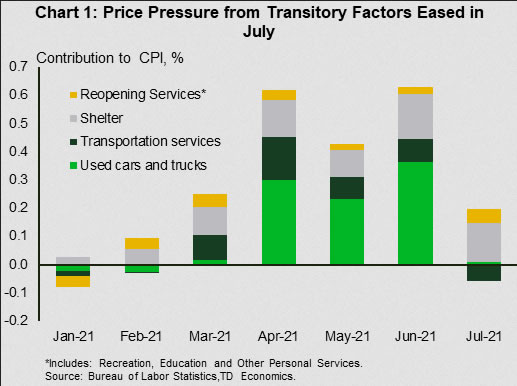 Markets reaction to last week’s strong jobs print spilled over to this week. At the time of writing, U.S. equity market rose by 0.6% and 10-year Treasuries yields stabilized around the 1.30% mark (down from 1.36% on Thursday but flat from 1.30% a week ago). The Treasury market took Wednesday’s inflation reading in stride. Indeed, July’s CPI calls to mind that gourmet dish where one flavor is followed by another, stimulating the palate. On a year-over-year basis, prices paid by U.S. consumers increased by 5.4%, remaining at a 13 year high for the second month in a row. This makes a great headline, but the underlying factors have a far more nuanced flavor.

Compared to the previous monthly increase of 0.9%, in July consumer saw a more modest price growth of 0.5%. Excluding food and energy, CPI increased by 0.3% month-on-month – a rate of change last seen in March of this year. On this basis, the report provided hopeful signs of moderation in categories that accounted for the recent spike in inflation. Unlike in the last three months, used cars and tracks hardly contributed to price growth in July. Airfares went in the opposite direction – falling in the month and helping to compress prices of transportation services.

The CPI report did point to higher growth in services where activity is rebounding as the economy reopens, with recreation, hospitality and personal services heating up in the month. Meanwhile, the dominant ingredient remains the price for shelter, which accounts for roughly the third of the consumer price basket and has been rising steadily since the beginning of the year.

These first signs of easing pressures seem to have vindicated the Fed’s stance on the transitory nature of price changes. Still, the path to normalization remains precarious, especially if consumer behavior shift back to consumption of goods in the wake of the recent upswing of the Delta variant. This is especially relevant for the other side of the Fed’s mandate – the labor market.

June’s Job Opening and Labor Turnover Survey (JOLTS) showed that job openings increased to another record high, surpassing the total number of unemployed workers for the second month since the beginning of the pandemic. Tight labor supply was broad-based, affecting most sectors of the economy, with an exception of construction services (which typically has a high unemployed-to-job opening ratio). The unfilled labor demand can be resolved through a recovery in the labor force, which remains suppressed by ongoing health risks.

All eyes are currently on the spread in the Delta variant that is threatening the economic recovery globally. While locally the spread may be mitigated by vaccinations and mask mandates, the American economy may still be impacted by an additional wave of supply chain disruptions. This week’s partial closure of one of China’s busiest ports is a good reminder that it’s too early to claim a victory over the pandemic. Still, as the economy adjusts further, there is good reason to believe that temporary price factors will continue to moderate while labor market steps on a firmer footing.

It’s shaping up to be a hot summer for the Canadian economy. The impressive take up of vaccines accelerated provincial reopening plans, and Canadians have been quick to take advantage. High-frequency credit and debit card data show a solid improvement in spending activity through June and early July. Employers have responded to this rapid rebound in demand by adding nearly 325k net new workers in these two months alone. The gain would have probably been even higher if not for Ontario and Manitoba only relaxing restrictions towards the end of July’s Labour Force Survey period (July 11th to 17th).

Indeed, August will likely see another robust improvement in employment. Job postings are soaring, driven in part by a flurry of ads for food and preparation services workers (Chart 1). Reopening has had a huge impact on the demand for workers, the question now is to what extent will labour supply rise to meet it.

In the U.S., reopening of the economy was met with labour shortages, specifically in high-touch services industries, as health worries, occupational transitions, and perhaps even fiscal support, slowed the employment recovery. Canada could see similar complications — anecdotally, there have been reports — but as of July there has been little to indicate a lack of available workers. Unlike in the U.S., where employers had to increase wages to attract new staff, pay pressures have been moderate in Canada, even in the accommodation and food industry (Chart 2). In fact, the average hourly wage in this industry is only slightly higher than what it was prior to the pandemic in Canada, whereas it is 10% higher stateside.
Chart 2 reports the average hourly wage index for the accommodation and food services industry in Canada and the U.S. Both series are indexed to 100 in February 2020. In Canada, wages have stayed pretty flat in this industry since the pandemic struck, but in the U.S. there has been rapid improvement over the course of 2021. In June, the average hourly wage was 10% higher than February 2020 in the U.S., and only 4% higher in Canada.

It’s possible that labour shortages will become more acute with time. Afterall, Canada reopened its economy after the U.S., and some provinces are still gradually easing public health measures. But there