Week Ahead – Fed Taper: Will They or Won’t They? Splits Loom Over Jackson Hole

The upcoming week will kick off with a bang as the flash PMI readings for August will flood the markets on Monday. However, it might go all quiet after that before Fed officials gather at Jackson Hole later in the week for this year’s economic symposium, which is set to be dominated by discussions on how and when to unwind the Fed’s emergency stimulus. Will policymakers finally lay out their tapering plans, potentially lifting the US dollar to fresh yearly highs, or will divisions overshadow the event?

Intensifying worries that the global economic recovery has hit another major bump on the road as the Delta spread shows no sign of abating has sent markets into a spin in the past week. Everything from stocks, commodities and risky currencies got hammered from the latest panic selling, with investors fleeing to safe havens. As has been the case during this pandemic whenever nerves are heightened, the US dollar has been the main beneficiary of this flight to safety. 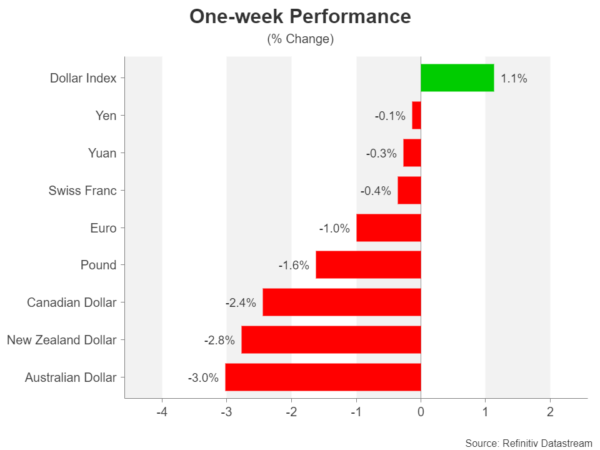 The greenback has crushed everything in its way, including the euro, even though not much has changed as far as the policy outlook for the Eurozone is concerned. The ECB’s dovish tilts in June and July had already put the single currency on a downward slope but the policy shift is mostly priced in now and it was down to the dollar’s relentless charge that the $1.17 support ruptured for the first time since early November.

However, this is mainly of symbolic significance and the euro’s losses will likely continue to stay contained relative to its peers’. That’s because the Eurozone economy is so far weathering the Delta outbreak better than most, helped not only by a high vaccination rate but also by not abandoning all Covid curbs altogether like Britain, which is keeping the latest virus escalation manageable.

Hence, the flash PMI prints by IHS Markit are expected to moderate only marginally in August, and this would be coming off the 15-year highs for the composite and services PMIs in July. There’s no sign yet that the Delta wave poses a serious threat to the Eurozone recovery so unless the PMIs unexpectedly plunge in August, dollar strength will remain the euro’s biggest downside risk. 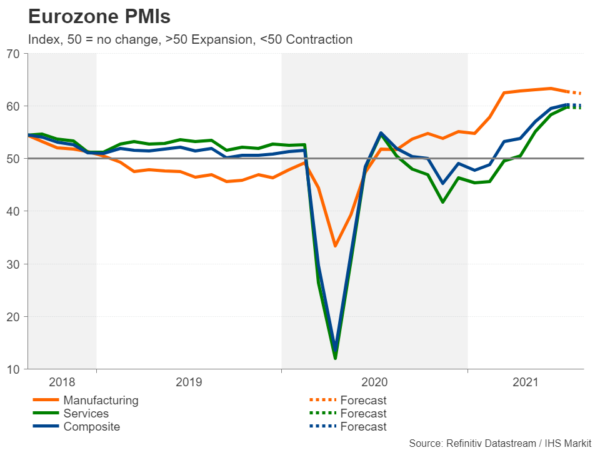 The minutes of the ECB’s July policy meeting due on Thursday are not anticipated to generate a huge amount of interest.

Pound caught in Delta storm; PMIs might not offer much relief

Like the euro area, the British economy has also been enjoying strong growth momentum during the summer. Whilst there are some concerns that the UK government is being too lax with virus restrictions and relying on vaccines alone to prevent a surge in hospitalizations, there’s nothing too alarming in the medical data yet to prompt a rethink of this approach. The economy has made a strong comeback since the easing of the Winter lockdown and the Bank of England is preparing to end its bond buying programme at the end of this year.

The UK labour market in particular is running hot, with job vacancies at a record high and wage growth reaching close to 9% y/y in June. It’s therefore going to require quite a substantial deterioration in economic conditions to derail the BoE’s taper plan and that probably won’t happen in August because Monday’s flash PMIs will likely point to an ongoing recovery. 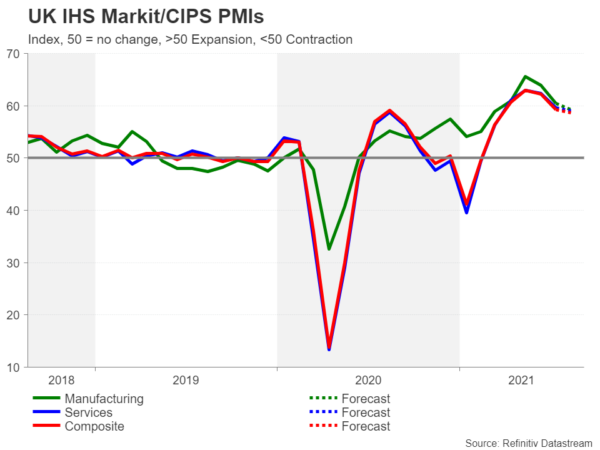 So why has the pound taken such a hit from the latest risk-off episode? Although investors are not as worried about the UK outlook as they are about more virus-exposed countries such as Australia and New Zealand, sterling is nevertheless a risky currency to hold during times of turmoil due to Britain’s large current account deficit. Should markets remain jittery in the coming week, cable is likely to extend its slide.

Will Jackson Hole live up to the hype?

Investors have been touting Jackson Hole as the ideal occasion for the Federal Reserve to signal its tapering intentions for some time now. After all, the annual economic symposium organized by the Kansas City Fed has been used many times in the past to flag major policy changes.

However, as the August 26-28 event approaches and even though Fed speakers have been dropping tapering hints left, right and centre lately, there’s a growing sense that markets won’t get all the answers they’re seeking next week. The minutes of the July FOMC minutes indicated that whilst policymakers agreed that tapering should start soon, they were at odds on the exact timing and pace of reducing asset purchases. 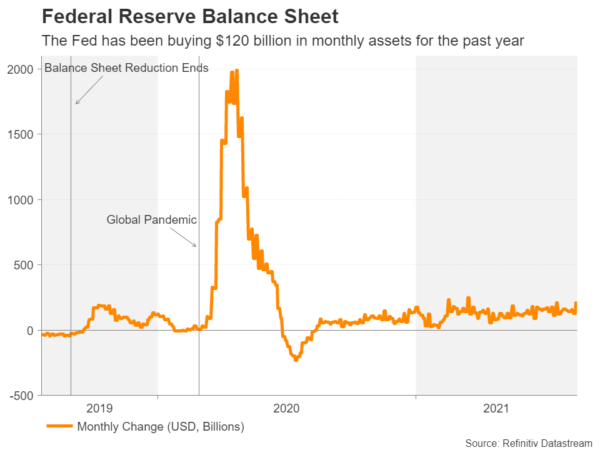 In the grand scheme of things, the timing won’t make a great deal of a difference to the markets. Whether tapering starts next month at the earliest or the beginning of 2022 at the latest, either way, tapering is coming. However, the divisions on how much progress has been made not only towards the Fed’s employment goal but also towards inflation may matter in determining how fast stimulus is withdrawn.

The worsening virus situation around the world makes a quick exit less likely, although delaying a decision for too long could also risk a cliff edge end to stimulus. But in the more immediate term, it is the uncertainty of what the Fed’s taper will look like that could unsettle markets the most. Unless Chair Powell provides some clarity in his keynote address at Jackson Hole, speculation of a growing split will only mount.

Can dollar bulls count on the Fed for a taper boost?

When it comes to the dollar, though, it’s hard to say what the reaction would be if Powell’s remarks leave traders none the wiser. The dollar index has just climbed to a new 2021 peak and there could be further gains in store for the currency if sentiment continues to sour. Markets being left in the dark about the Fed’s QE exit strategy could add to the risk aversion, but would this necessarily bolster the greenback?

The other danger is that Powell does send a strong taper signal but does not accompany this with enough reassurances that the move will be very gradual. Against a backdrop of fresh virus woes, this could spark even more panic.

But there could be some good news from US data that could help ease concerns about an economic slowdown. Personal income and spending numbers out on Friday are expected to show incomes rising by 0.2% and consumption by 0.5% month-on-month in July. The core PCE price index for the same month will be released alongside those data. Forecasts are for the Fed’s favourite inflation metric to edge up to 3.6% year-on-year from 3.5% in the prior month, in potentially another sign that price pressures may be ebbing. 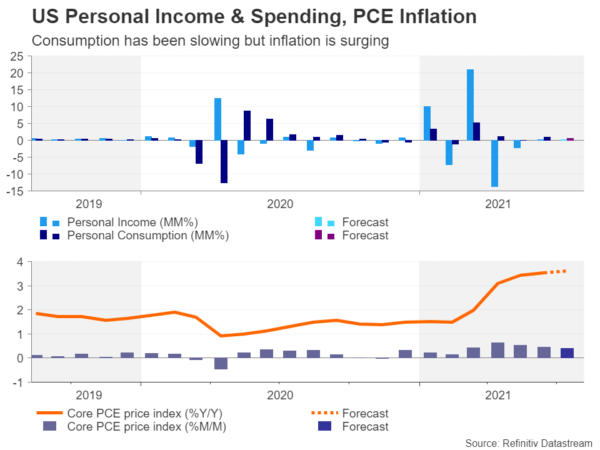 Other numbers to watch are the flash August PMIs and existing home sales on Monday. New home sales will follow on Tuesday, durable goods orders on Wednesday and the second estimate of Q2 GDP growth on Thursday. However, the one that might attract the most attention is the final estimate of the University of Michigan’s consumer sentiment gauge on Friday. A strong upward revision to the index following the shock slump in the preliminary reading could go some way in allaying growth concerns in the United States.

Finally, the heavily battered antipodean currencies will be hoping for some data boost next week. The aussie will be eying flash PMIs on Monday and capital expenditure figures for the second quarter on Thursday. The kiwi, meanwhile, will come under the spotlight on Tuesday from quarterly retail sales numbers.