The Weekly Bottom Line: Getting Back to Normal Isn’t Easy

U.S. – Getting Back to Normal Isn’t Easy

In this week’s release of its meeting minutes, the Federal Open Market Committee (FOMC) reasserted the view that the recovery is well under way and the groundwork for tapering its asset purchase program is being set. Equities sold off on the news, with the S&P 500 closing the day down 1.1% while the DXY dollar index popped 0.3%. Beyond the market reaction, the minutes suggest that the committee is looking past hiccups in growth and at an economy slowly but surely returning to normal.

Take, for instance the second quarter of 2021. GDP growth disappointed, registering +6.5% (annualized). Yet, a large part of the miss was due to inventory drawdowns for which dwindling automobile stockpiles were the main culprit. The effect of limited product availability lingered into July as vehicle sales weighed down the overall retail sales picture for the month. Supply chains continue to disrupt vehicle production so this issue will likely persist in the coming months. However, as production is normalized in the latter part of the year, the pent-up demand being generated by the foregone sales should provide a lift to spending into 2022.

Another key theme is the rotation from goods expenditures to services. After the initial lockdowns were lifted, retail sales skyrocketed and continue to far exceed their pre-crisis trend. This week’s report showed a steeper contraction than expected, but it serves to highlight just how far from normal the spending situation is.

Getting back to normal means spending on services will continue to grow as behaviors shift back to pre-crisis norms. A quick barometer for the change is to compare how much money is being spent on eating in versus dining out. Before the lockdowns, consumers spent roughly one dollar at food service establishments for every dollar spent on food and beverages at home. After a drastic shift towards eating at home at the beginning of the crisis, households are now back to spending 97 cents on food service for every dollar at home (Chart 1). The return to a pre-crisis normal isn’t complete, but it’s getting there. 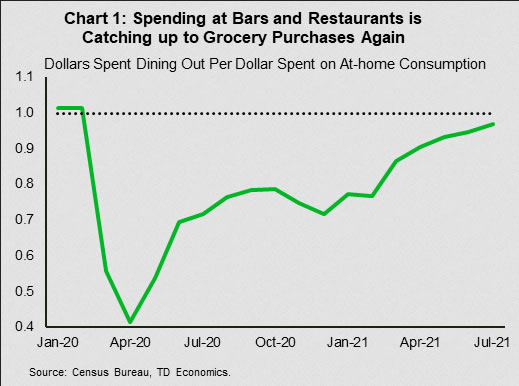 As spending behavior normalizes so should employment. The services sector has been hit hard. Leisure and hospitality is responsible for over a fifth of private sector positions still missing, despite making up about 12% of jobs. Here too the picture is improving, as employment in the sector has grown 15.7% since January, compared to 3.0% for the private sector overall.

Things are looking up, but the spread of the Delta variant continues to cast a pall over the outlook. The University of Michigan survey of consumer sentiment dipped in August to its lowest level since the start of the pandemic (Chart 2). The survey isn’t the be all and end all of economic indicators, but a deterioration in economic confidence at a time that officials expect consumers to resume spending and spur employment in the services sector presents a material downside risk to economy. The FOMC recognizes that extraordinary measures may not be needed much longer, but that doesn’t mean we’re out of the woods just yet. 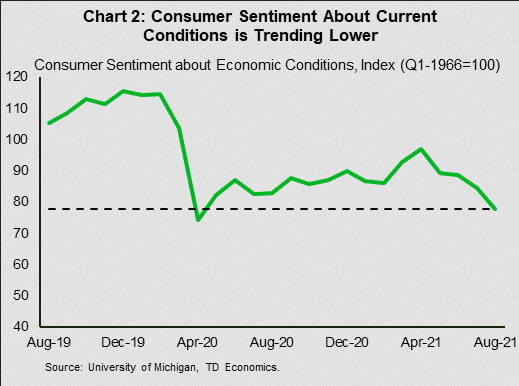 News of an upcoming Federal election caught the headlines this week, but financial markets and data releases still offered a lot of excitement. A risk-off tone prevailed. The Delta variant, negative economic surprises in China and the U.S., and the Federal Reserve’s potential upcoming exit from its quantitative easing programs were the key culprits.

In Canada, the S&P/TSX Composite followed its global peers lower, falling 1.5% on the week (as of 10 AM). But the more notable victims of souring sentiment were commodity and exchange rate markets (Chart 1). The WTI price fell a notable 7.5% on the week. The Canadian dollar followed, dropping to 78 cents and erasing all of its gains this year. Though price action may continue to exhibit volatility in the near term, current WTI and CAD levels are not far below our projected Q4 and 2022 profiles. We had previously forecasted a moderation in commodity prices in the second half of the year (and more specifically in Q4 for oil prices). This was predicated on the assumption that the recovery would tilt from goods to services spending, and that supply-side constraints/quotas would start dissipating. Rising delta variant concerns only sped up the process. But current levels are not necessarily a cause for concern. A lower Canadian dollar bodes well for exporters, and WTI prices in the US$60s are still supportive for producers (while easing price pressures on consumers). 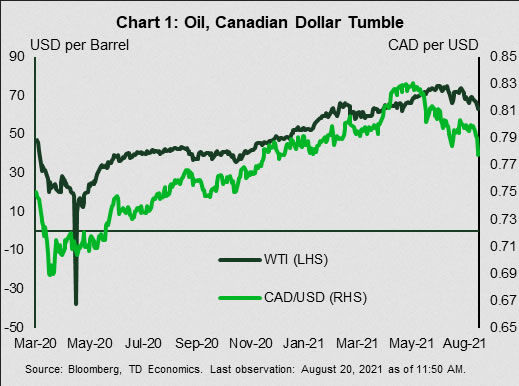 The overall tone may have been gloomy this week, but the macro backdrop in Canada remains solid. June data for retail (+4.2%) and manufacturing sales (+2.1%) point to strength in June’s GDP, providing a solid handoff to the third quarter. Still, the softening momentum narrative seen elsewhere is starting to show up in some sectors. Housing markets are a case in point – where existing home sales and starts both fell modestly in July. Even then, activity remains above where it was prior to the pandemic. A reopening-led spurt in employment, hours worked, and the services sector will also be a key tailwind for a Q3 growth. Indeed, a look at more high frequency indicators in August suggests that economic activity remains healthy – with no discernable pull back as yet. OpenTable restaurant reservation data and mobility data from Google point to decent consumer engagement.
Chart 2 shows year/year and month/month (seasonally adjusted) headline CPI inflation growth. Both picked up in July (+3.7% y/y, +0.5% m/m) from their June pace (+3.1% y/y, +0.2% m/m).

Turning to this week’s key release, CPI inflation (Chart 2) increased 3.7% (y/y) in July, above consensus estimates (3.4%). What stood out in the report was the broad-based nature of the pick-up, with six of the eight categories showing stronger year/year growth. The monthly pace of price growth (+0.5%) also picked up. This suggests that strong demand is now also playing a role, in tandem with supply chain disruptions. The Bank of Canada is closely watching, and has already started tapering, while signaling a potential rate hike late next year. 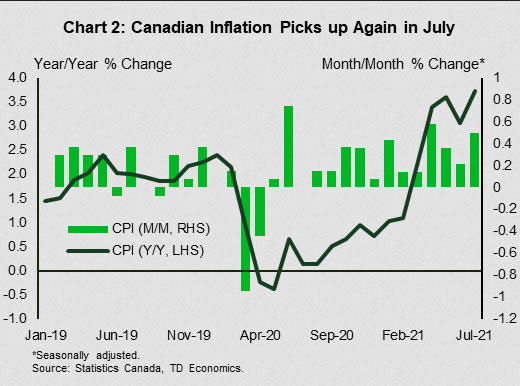 Notwithstanding the still-decent economic backdrop, downside risks have risen as a result of the Delta variant. Experience suggests that the economy is becoming more resilient to each subsequent wave. While uncertainty remains elevated, the hope is that Canada’s high vaccination rate will leave it in a strong position to overcome these challenges.