Markets are slow ahead of Jackson Hole Symposium, waiting on Chair Jerome Powell’s speech when he may give us more details about tapering. However, even if they would decide to taper in the near future, they may not be aggressive at all, especially not due to Covid numbers in the US that are still rising so we think they will be very careful as they assume that numbers can get a lot worse in weeks ahead. As a result, the USD Index is trading lower, with an impulsive structure suggesting more weakness after any three-wave rally so at the same time EURUSD will be expected to come higher.

From an Elliott Wave perspective, EURUSD came down into wave 5 which broke beneath March levels and traded close to our projection levels for a fifth wave at 1.16-1.1650 area, so sooner or later bulls may become stronger. Also notice that pair is now trying to recover with a small impulse after the divergence on the RSI which is normally a bottom formation. However, we still need that push and daily close out of a downward channel to confirm a bullish reversal. 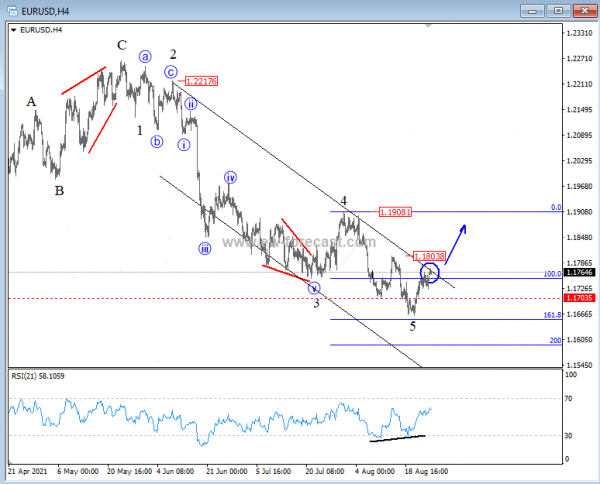