In a relatively quiet week for economic data, markets had to be patient until Friday for the main event: Fed Chair Powell’s remarks from the Jackson Hole symposium. The event itself has been impacted by the rise in Delta variant cases, going online at the last minute. Powell’s remarks provided a clear signal that as long as the economy continues to make progress in the coming months, as we expect, the Fed will begin tapering its asset purchases before year-end.

The economic backdrop to the speech has been pretty good. Existing home sales rose 2% in July, showing that underlying demand for housing is solid, and that the pullback in sales from the post-lockdown surge has run its course. The second release of the GDP data showed that the U.S. economy was very slightly stronger in the second quarter than previously reported. Sitting more than halfway through the third quarter though, the real question is how well spending will hold up against the Delta wave.

There weren’t too many signs of Delta-related caution in the July spending data. Spending on close contact services grew about 1% month-on-month in July, matching June’s pace. Since the initial re-opening stage in 2020, goods spending has surged (and durable goods specifically), supported by generous government supports and restrictions on services spending (Chart 1). But there are only so many iPads and TVs people need. Spending on these durable goods has been declining since March, while services spending is making steady gains. This correction in goods spending is expected to hold consumer spending below 2% in the third quarter, even before caution related to the Delta variant is incorporated in the forecast. 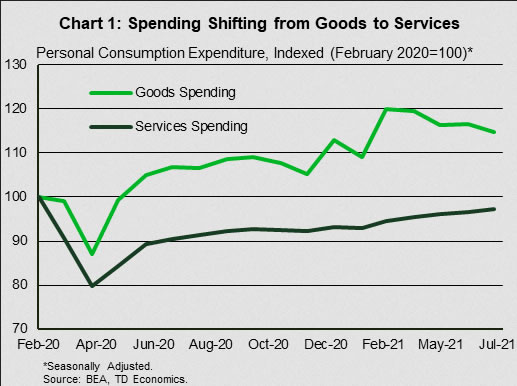 If we do see slowing in these close-contact services through August and September, consumer spending growth could slow further. Still, we don’t expect it to be derailed for a few reasons. For starters, U.S. households have amassed over $2.5 trillion in excess savings over the course of the pandemic. Even if unevenly distributed, this provides a substantial cushion against a temporary slowing in momentum. Second, labor shortages, which appear relatively widespread across regions and industries, may lead employers to hold on to workers, rather than lay them off due to a temporary lull in demand, helping to keep the labor market resilient.

Finally, while headline personal income growth is being buffeted by swings in government support programs, underlying growth in wages and salaries has been solid (Chart 2). Indeed, wages and salaries rose 1% in July alone, and are up 10.6% annualized pace over the past three months. Solid income gains should support consumer spending in the months ahead. 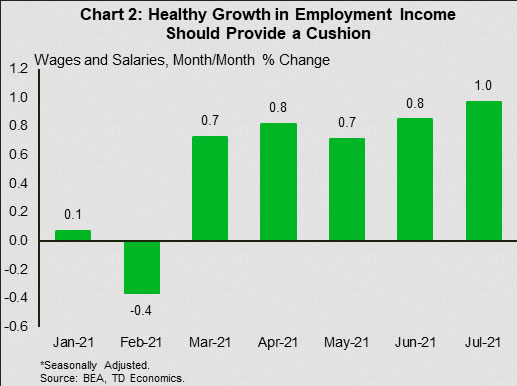 Powell’s remarks took a deep dive on recent inflation trends, and defended his view that much of the recent surge in inflation is transitory. He highlighted the clear improvement in the labor market, while acknowledging the risks posed by the Delta variant. Overall, his remarks were consistent with our view that asset purchases will be tapered this year, given the economy’s expected resilience to the Delta wave.

It was a quiet week in terms of economic data. The federal election continued to make headlines as parties released details of their election platforms. In a nice reversal to last week’s sell-off, equity markets were upbeat, more than recovering last week’s losses. Ditto for the WTI oil price, which rebounded on the week, giving a lift to the Canadian dollar vis-à-vis the greenback.

The economic data flow will pick up next week, with June’s GDP report expected to show economic activity bouncing back strongly as restrictions began to ease. This should provide a solid handoff for the third quarter, when further easing of containment measures over the summer is expected to usher a strong bounce back in real GDP growth.

Indeed, economic activity continued to broaden and gather pace during the summer months, allowing the labour market recovery to gain momentum. Spending has picked up in areas most directly impacted by the pandemic such as travel, dining out and recreation. While international tourism remains challenged by the pandemic, Canadians have embraced domestic travel. Data shows that in July, domestic plane traffic was nearly on par with pre-pandemic level (Chart 1). Restaurant reservations data from OpenTable show similar progress. 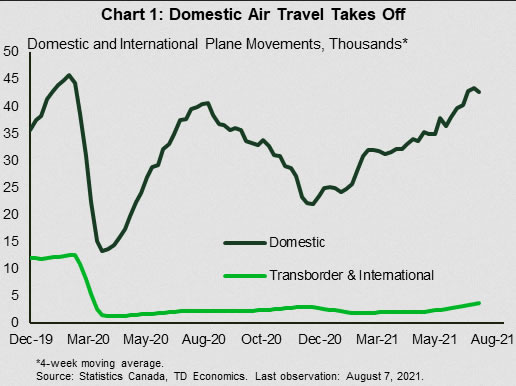 How long the good times will roll will depend on the virus. As we note this week in our updated COVID-19 Economic Tracker, cases are on the rise across most developed countries. Canada too has witnessed an uptick in COVID-19 cases in all regions in recent weeks, led by Western provinces. Canada’s vaccination rate is among the highest in the world with over 74% of its adults fully vaccinated, which gives some hope that strict containment measures will be avoided. Canada’s already-high vaccination rate could be boosted further still. A number of provinces (QC, BC, PEI, MB) have introduced vaccine passports, and a growing list of companies are announcing mandatory vaccination for in-person working arrangements. This could spur more people to get vaccinated.

So far, the high vaccination rate has kept hospitalization and death rates low relative to cases. Still, cases and hospitalization are rising swiftly among the non-vaccinated population, and there are breakthrough cases among the vaccinated. Past waves have shown that Canada has a much lower tolerance toward hospitalization thresholds relative to other countries. This poses a downside risk to the outlook, as the pace of reopening might be paused or scaled back.

Economic growth could also be restrained by ongoing supply chain disruptions, and labour shortages. Responses from this week’s CFIB Business Barometer Survey showed these issues intensified in August (Chart 2). Nearly half of respondents cited a shortage of skilled labour and a record 27.6% of firms reported shortage of input products as an impediment to growth in sales or production. Given that many emerging economies, where many of the goods are being manufactured, are dealing with Delta outbreaks of their own, these supply chain bottlenecks are unlikely to ease in the near term.