The Bank of Canada was likely as surprised as everyone else about a disappointing round of Q2 GDP data – and an even more surprising drop in July output as the economy was reopening from spring lockdowns. That left GDP growth tracking well-below the central bank’s call for a 7.3% Q3 gain. One data release does not make a trend, and other economic data from the summer have been better. Our own tracking of spending in the hospitality sector has looked much stronger with virus containment measures easing. Output in the goods sector continues to be restrained by severe supply chain disruptions and labour shortages, but exports of manufactured products (including motor vehicles) increased in July. We expect Friday’s jobs report will show another significant increase in employment in August, boosted by a continued recovery in those high-contact service sectors, with a drop in the unemployment rate to (a still elevated) 7.2%.

Friday will also see the release of Q2 national balance sheet accounts– and those will confirm that households are awash in purchasing power. Household net worth already increased by a whopping $2 trillion from Q4/2019 (pre-shock) to Q1/2021, boosted by a $1.2 trillion increase in equity in real-estate. And those numbers likely both got even bigger in Q2. In this abnormal pandemic economic backdrop, the concern remains not so much if households have the income to support stronger spending, but whether virus spread will allow it. While the backward-looking GDP data over the last week was disappointing, a larger concern for monetary policymakers will be the extent to which higher vaccination rates are successful at slowing virus spread/hospitalizations and preventing lockdowns of sectors of the economy. We expect no change in BoC monetary policy in September. Much more economic data will be available by the next meeting in October (when policymakers will also formally update their economic forecasts) but, all else equal, an announcement to taper central bank asset purchases at that meeting also looks less likely than it did a week ago. 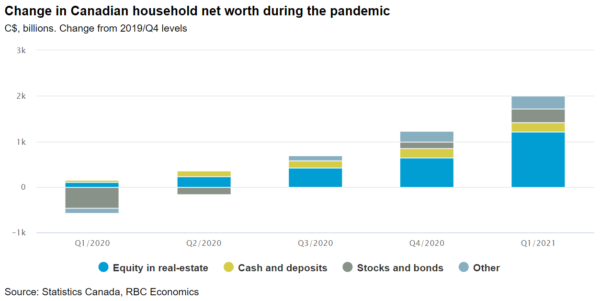 We expect Canadian employment rose 100k in August, similar to the 94k gain in July with job growth benefiting from further easing in virus containment measures in parts of the country, including a move to Step 3 of Ontario’s re-opening plan that didn’t start until late in the July survey reference period. 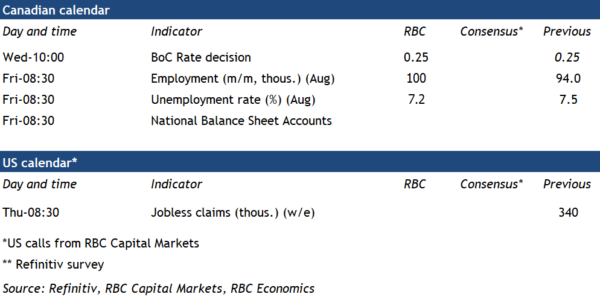