Since the middle of Wednesday’s trading, the USD/JPY has continued to trade sideways around the 110.00 level. However, up to the start of Friday’s trading, the rate was finding support in the 200-hour simple moving average. On Friday, the rate shortly traded below the SMA indicating that it might not continue to provide support.

In the case the USD/JPY currency exchange rate surges, it would first face the resistance of the 55-hour simple moving average at 110.05 and the 110.10 level. Above these levels, the rate could aim at the 110.40 level, which stopped the September 1 surge.

However, a decline of the rate would look for support in the 200-hour simple moving average and the weekly simple pivot point at 109.86. If these levels fail to provide support, the USD/JPY might reach for the August 31 low level at 109.60. 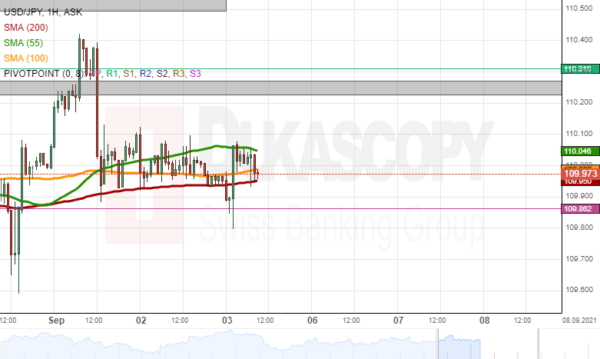