Bullish Dataset Awaited to Bolster Pound ahead of BoE

Sterling remains the king among major currencies year-to-date thanks to its immediate vaccination landmark at the start of the year, but despite its latest rebound, buying pressures have been inadequate to drive it above the 1.3900 – 1.4000 resistance territory over the past month. With one week to go until the next Bank of England’s policy meeting and investors being lost between optimism for monetary tightening and fears of slowing economic growth, this week’s data could be crucial to build some hawkishness. UK employment data will feature the calendar on Tuesday, followed by CPI inflation on Wednesday and retail sales on Friday, all due at 06:00 GMT.

The BoE communicated a clear plan for how it intends to exit the pandemic-led monetary easing phase during its August gathering. The guidance is for the benchmark interest rate to rise first from the current 0.1%, but the focus will not switch to the balance sheet unless that rate climbs to 0.5%, in which case the central bank is expected to stop reinvesting its holdings of government and corporate bonds. Then, should economic conditions allow for more rate hikes to 1.0%, it will consider selling some of its bonds.The above suggests that the balance sheet is not a priority for the BoE, although its size to GDP has ramp up since the start of the year to peak marginally above the Fed’s as of Q2. Interest rates need to reach a threshold point for the central bank to adjust the settings in the asset purchase program. However, how fast borrowing costs will pick up towards the target will be conditional on the UK’s economic circumstances. 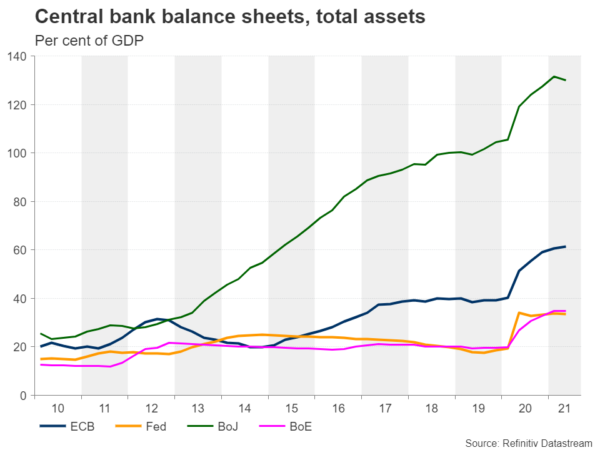 BoE chief Andrew Bailey revealed last week that during the previous policy meeting policymakers were split evenly (4-4) between those who believed that there was clear evidence that the economy is making progress in eliminating spare capacity and achieving 2.0% inflation sustainably, and those who felt that more needs to be done.Apparently, the deceleration in the services sector as reflected in the downbeat August Markit PMI survey, and the stagnation in July’s monthly GDP figures is not in tie with this narrative. Yet, the economic spectrum could take a more positive color this week as forecasts point to a solid employment growth of 178k in July compared to 95k in June and to a mildly smaller unemployment rate of 4.6% from 4.7% previously.

Perhaps the jobs data could be considered outdated, though with the furlough scheme entering its final weeks this month, a positive surprise could be an encouraging signal for the central bank that more people have been rejoining the labor market as government’s wage contribution have been falling. Recent stats indicated that the number of people under the furlough scheme was the lowest in July since the start of the pandemic.

On Wednesday, inflation figures could be another incentive to deviate from current loose policy settings, with investors expecting headline CPI to heat to 2.9% y/y from 2.0% previously and the monthly gauge bouncing from 0.0% to 0.5%. A potential pickup in producer prices on the same day could further convince that inflation could be something more than temporary, especially if retail sales on Friday return to growth, flagging that consumer spending is a tailwind to soaring prices. Expectations are for a robust recovery from -2.5% to 0.5% m/m, which could consequently lead to a stronger annual expansion of 2.7% versus 2.4% previously. Excluding fuel, retail sales could interestingly show a steeper upturn of 0.8% m/m from -2.4% in July. 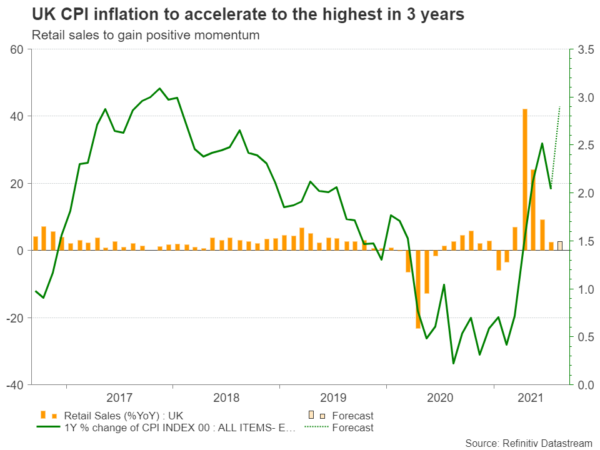 The good news for sterling is that the new BoE chief economist and former ECB official, Huw Pill, who will be participating in the voting process for the first time since his nomination, is considered a hawk on policy. Therefore, although an imminent rate hike during next week’s BoE event is unlikely to emerge as covid mortality is still gradually rising, his contribution could strengthen the hawkish voice within the central bank and raise the odds for a 15 basis-point rate hike in May 2022, especially if this week’s dataset provides an early warning that the economy is indeed meeting the minimum criteria for escaping the stimulus era. In this case, pound/dollar could set another battle with the 1.3900 level before heading for the crucial resistance of 1.4000.Alternatively, if the data fell short of expectations, pound/dollar could slide below the 200-day simple moving average at 1.3825 to seek support around the 20-day SMA at 1.3760.