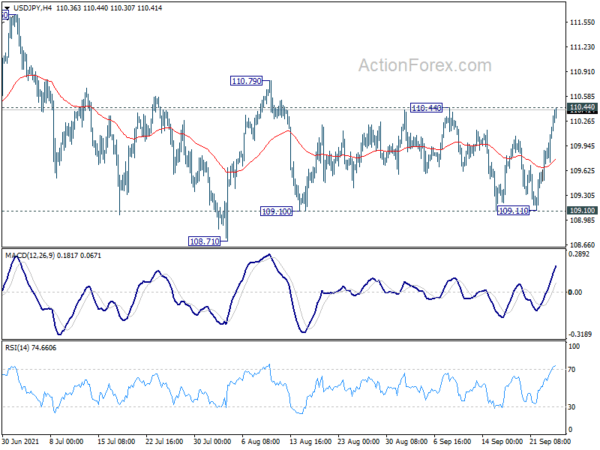 Market sentiment took a big turn overnight with strong rally in US indexes. Nikkei follows in Asia and reclaimed 30k handle, but other Asian markets are soft. Yen dropped notably following return of risk appetite while Dollar also weakened. On the other hand, commodity currencies rebounded notably. Yen is now the worst performing one for the week, followed by Sterling. Swiss Franc is the strongest followed by Canadian. But the picture could change before weekly close.

Technically, a focus is now on whether Yen’s selloff would extend further immediately. In particular, break of 110.44 resistance in USD/JPY will be a strong sign of bullish range breakout. Further break of 110.79 resistance would pave the way to retest 111.65 high. Such development, if happens, could be accompanied by break of 130.73 resistance in EUR/JPY, and 152.85 resistance in GBP/JPY.

Japan PMI manufacturing dropped to 51.2 in Sep, services rose to 47.4

Usamah Bhatti, economist at IHS Markit said: “The pace of decline was softer than that seen in August, as the larger services sector saw a considerable easing in the rate of contraction… Input prices across the private sector rose at the fastest pace for 13 years, with businesses attributing the rise to higher raw material, freight and staff costs amid supply shortages.”

“This is a larger deficit than normal because of higher values for imports, particularly vehicles, continuing the trend observed over the last few months. August is also the month when we typically see lower values for dairy exports,” international trade manager Alasdair Allen said.

UK Gfk consumer confidence dropped to -13 in Sep, consumers slamming on the brakes

UK Gfk consumer confidence dropped form -8 to -13 in September, with all measures down. In particular, general economic situation over the next 12 months dropped sharply from -6 to -16.

Joe Staton, Client Strategy Director GfK, comments: “On the back of concerns about rising prices for fuel and food, the growth in headline inflation, tax hikes, empty shelves and the end of the furlough scheme, September sees consumers slamming on the brakes as those already in economic hardship anticipate a potential cost of living crisis.

Germany Ifo business climate is the main feature today while US will release new home sales. Attention will also be on Fed Chair Jerome Powell’s comment but he’s unlikely to deviate from what he said at the post FOMC press conference just two days ago.

USD/JPY’s rebound from 109.11 extends higher today and focus is now immediately on 110.44 resistance. Firm break there will argue that consolidation pattern from 111.65 might have finally completed. Stronger rise would be seen through 110.79 to retest 111.65 high. On the downside, though, break of 109.10 will argue that larger fall from 111.65 is resuming. De