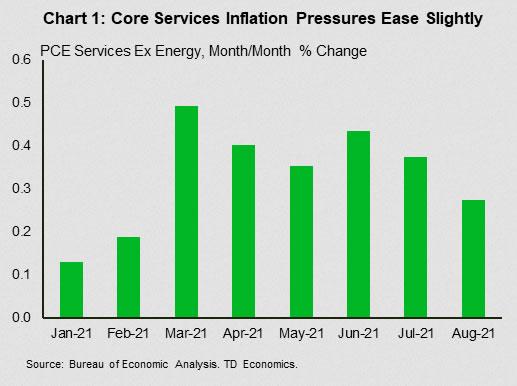 Equity markets had a notable decline this week due to various issues, among them worries about a delta-variant driven slowdown and central banks signaling an end to pandemic-era stimulus. Congress is once again locked in brinksmanship on the debt ceiling, although markets are likely less spooked having seen this show numerous times before. Friday’s economic data looked pretty good, but was not enough to boost sentiment on equities.

Congress passed an 11th hour deal to keep government funded through Dec. 3rd, averting a shutdown. That takes one Washington-related risk off the table, but Congress still needs to raise the debt ceiling by Oct. 18th. If it fails to do so, the Treasury will then need to make decisions about which of the U.S. government’s bills it won’t pay. Congress has gone through many of these brinksmanship debacles, but it has never not made debt payments. We expect a deal to be reached, but likely at the last minute.

This week also featured several Fed speakers, but most notably Chair Powell’s testimony in Congress. He spoke about the difficult tradeoff the Fed is facing with unemployment and inflation both elevated. The Fed has a dual mandate on fostering full employment and low and stable inflation. It would prefer to make more progress on the employment side before taking its foot off the accelerator pedal but inflation is testing its resolve.

The Fed expects that the worst of the recent run-up in inflation will prove temporary. That is a reasonable expectation. As the economy re-opened and Americans started travelling again, price spikes occurred in many travel related goods and services due to demand outpacing supply. Prices sharply rose for things like car rentals, hotel rooms and airline fares. These price spikes are expected to be one time, and will likely not keep inflation elevated on an ongoing basis.

The August inflation data confirms this is occurring. The core PCE deflator – the Fed’s preferred inflation metric – was released on Friday and showed that core services inflation continued to ease from the hotter readings seen in the spring (Chart 1). Inflation is typically cited in year-on-year growth rates, and core inflation remained quite hot at 3.6% in August. We expect that while core inflation to remain high in the coming months due to base effects, it will moderate in 2022 (see our latest forecast). 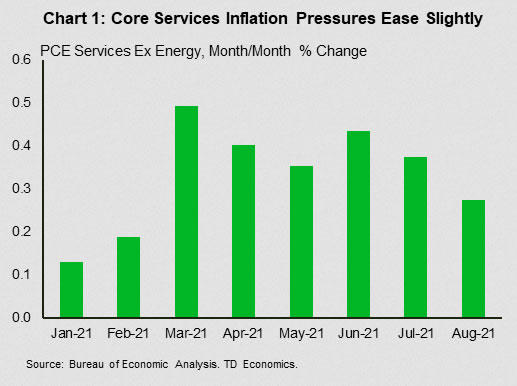 The release also provided some reassurance on the resilience of consumer spending. Growth in services spending cooled from the early days of re-opening. This is to be expected a