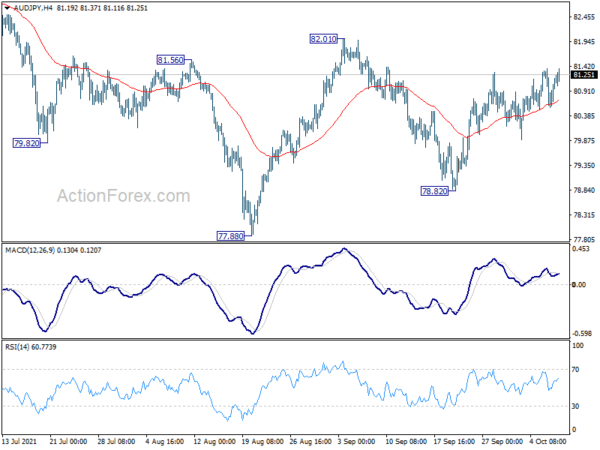 Selloff in Euro remains the main theme in slow markets today. Return of risk appetite is also weighing down Dollar and Yen. On the other hand, commodity currencies are generally strong, with Aussie having an upper hand over Kiwi and Loonie. Sterling is mixed for now, partly supported by buying against European majors. While stocks are rebounding, major indexes are staying in familiar range. Traders would like to wait for tomorrow’s US NFP before taking a committed stance.

Technically, as EUR/AUD is breaking away from 1.5898 structural support cleanly, we’d also keep an eye on 0.7315 minor resistance in AUD/USD. Firm break there will argue that the pull back from 0.7477 has completed and further rise could be seen through this resistance to resume the whole rebound from 0.7105. AUD/JPY appears to be building a base for further rise with help from 4 hour 55 EMA. Break of 82.01 resistance will resume the rebound from 77.88. 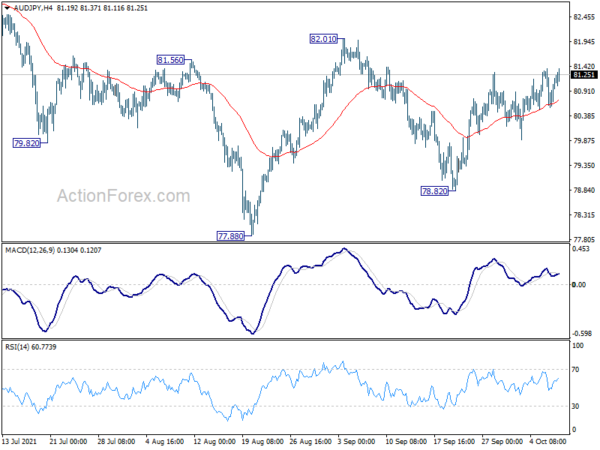 US initial jobless claims dropped to 326k, below expectations

In the accounts of ECB’s September 8-9 meeting, Governing Council members concurred with the assessment that “an accommodative monetary policy stance remained”. Also, “policy support from a sustained pace of net purchases under the PEPP, along with the other instruments and the recalibrated forward guidance, was deemed essential”.

Financing conditions had “had remained favourable or had loosened further” since June, and was “visible across a broad spectrum of indicators”. Inflation outlook had a “significant improvement over the course of the year”. However, the near-term increase in inflation was “largely driven by temporary factors that would fade in the medium term and not call for policy tightening.”

Also, it’s noted that “markets were already expecting an end to net asset purchases under the PEPP by March 2022”, but such expectation was “not showing a significant impact on financing conditions”.

Overall, all members agreed to “moderately scale down the pace of purchases under the PEPP”.

ECB Stournaras: Speculation of 2023 rate hike is not in accordance with our forward guidance

ECB Governing Council member Yannis Stournaras told Bloomberg TV that speculations for a first hike around mid-2023 are “not in accordance with our forward guidance”. He added that the central bank will try to avoid any disruption after the end of the PEPP.

“Asset purchases aim at favorable financing conditions, at smooth transition of monetary policy to prevent any kind of fragmentation in jurisdictions in the euro area,” Stournaras said. “I’m sure that the Governing Council will continue to aim at this.”

Stournaras also said Eurozone is “not in the same position” as the US on inflation. He said, “the inflation forecasts are lower for the euro zone than in the U.S. and in the U.K. It’s natural that we’re in a different phase of monetary policy.”

Separately, Governing Council member Francois Villeroy de Galhau said he expected inflation to fall back below 2% within a year.

In reply to a questionnaire by the Treasury Select Committee, BoE policymaker Huw Pill said he expected interest rates to “remain at relatively low levels for the coming years, even as the impact of the COVID-19 pandemic recede.”

But he acknowledged tha