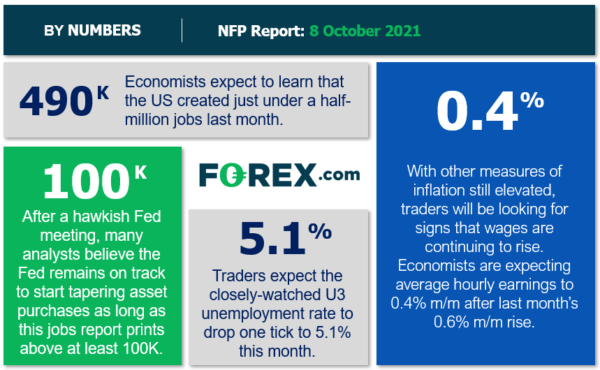 Any time we discuss the monthly US non-farm payrolls (NFP) report, we always emphasize that it’s significant primarily because of the impact it has on Federal Reserve policy.

Following last month’s FOMC meeting though, Fed Chairman Jerome Powell made it fairly clear that the central bank plans to announce its tapering plan at its November meeting, with a targeted end date around the middle of next year.

Against that backdrop, this month’s US jobs report will likely only have to clear the lowest of hurdles to keep the Fed on track; indeed, some analysts are suggesting that as long as US economy creates at least 100K net new jobs, the Fed will feel comfortable announcing its tapering plan.

Put another way, as long as this month’s jobs report is anywhere near mediocre, the market impact may be more limited than usual. Thankfully (for the US economy, if not necessarily for traders) expectations are well above that low threshold, with traders and economists expecting 490K net new jobs in this month’s NFP report, with the average hourly earnings figure expected to rise 0.4% m/m: Are these expectations justified? We dive into the key leading indicators for Friday’s critical jobs report below!

As a reminder, the state of the US labor market remains more uncertain and volatile than usual as it emerges from the unprecedented disruption of the COVID pandemic. That said, weighing the data and our internal models, the leading indicators point to a slightly below-expectation reading in this month’s NFP report, with headline job growth potentially coming in somewhere in the 250-450k range, albeit with a bigger band of uncertainty than ever given the current global backdrop.

Regardless, the month-to-month fluctuations in this report are notoriously difficult to predict, so we wouldn’t put too much stock into any forecasts (including ours). As always, the other aspects of the release, prominently including the closely-watched average hourly earnings figure which rose 0.6% m/m in August, will likely be just as important as the headline figure itself.

The US dollar index has rallied strongly over the last month, helped along by general risk aversion in the market and a relatively hawkish Federal Reserve, leaving the greenback testing its highest levels since last September.

In terms of potential trade setups, readers may want to consider EUR/USD sell opportunities on a strong US jobs report. After breaking below previous support in the 1.1600 area, the world’s most widely traded currency pair is vulnerable to a continuation lower if the monetary policy divergence between the US and Europe looks poised to widen further.

Meanwhile, a weak jobs report could present a sell opportunity in USD/CHF. The pair did recently peek out to a 6-month high, but it has since pulled back and is showing a bearish divergence with its 14-day RSI at the recent highs, signaling that buying pressure may be waning.