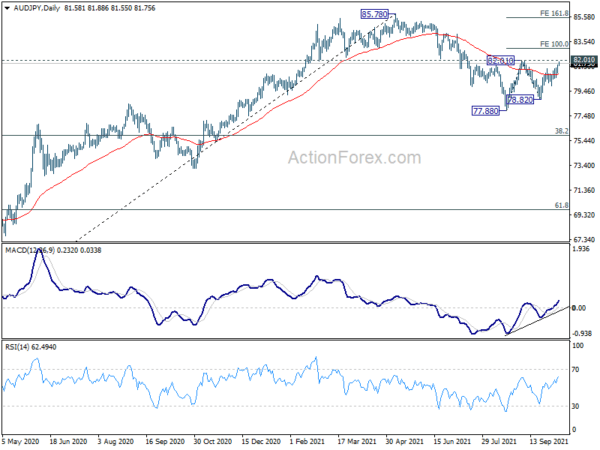 Following strong rally in US stocks and treasury yield overnight, Yen is trading broadly lower today, together with Swiss Franc. Yen is also the worst performing one for the week, followed by Euro. On the other hand, Canadian Dollar is the winner for the week, followed by Aussie. Focus will turn to US job data today. Upside surprise there could prompt further rally in treasury yield and thus, pressure Yen further. But the reaction in other currencies would depend on the reactions in overall stock market movements.

Technically, AUD/JPY is now eyeing 82.01 resistance with this week’s rally. Firm break there will firstly resume the rebound from 77.88. Secondly, it will affirm the case that correction from 85.78 has completed. Further rise would be seen to 100% projection of 77.88 to 82.01 from 78.82 at 82.95. Decisive break of 82.95 would probably bring upside acceleration towards 161.8% projection at 85.50, which is close to 85.78 high. Such development could happen if both stocks and yields surge after NFP today. 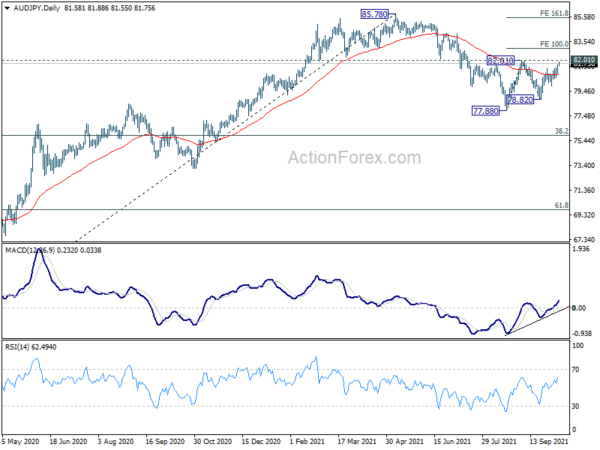 Cleveland Fed Bank President Loretta Mester said in a panel discussion yesterday that inflation in the US is “pandemic related” only. “Fundamentally, if it’s supply-side driven, that’s not something monetary policy should be responding to,” Mester added.

On monetary policy, she said, “our new strategy says, look, we’re not going to be moving until we have average inflation being 2% and we’re now going to be making up for past misses. I think we’ve basically met that part of the mandate.”

“My forecast is that we’ll meet that [employment] mandate by the end of next year, if things play out as I expect,” Mester said.

“My baseline is we’ll see inflation rates move back down as pent-up demand eases and supply-side challenges ease. But, as you know, that is taking longer than people thought and, in some cases supply chain issues are getting worse,” Mester said.

BoC Governor Tiff Macklem said yesterday that there’s “a bit more persistence” in inflation than policy makers previously thought. But he added, ” I think there are good reasons to believe that they are temporary,”

“Our job as a central bank is to make sure that one-off increase in prices doesn’t become ongoing inflation… What we’re really looking for is to see any signs of spreading,” he added, noting that medium- to longer-term measures of expected inflation had not risen.

He also pointed to the “frictions” in the labor market, which took longer to work through. “We’ve never reopened an economy before. And I think what we’re seeing is reopening an economy is a lot more complicated than closing one,” he said.

ECB Chief Economist Philip Lane said, “the red zone for everyone is if inflation became persistent at a number that’s immoderately above the inflation target. That’s a very far distance from where the euro area is.” He added, “we have to be the counterweight, honestly, in this debate.”

US non-farm payrolls report is the major focus for today. Markets are expecting 500k job growth in September. Unemployment rate is expected to tick down from 5.2% to 5.1%. Average hourly earnings are expected to have risen 0.4% mom.

Bond market reactions to NFP today would be worth a watch. 10-year yield closed up 0.047 at 1.571 overnight, close to day high at 1.573. The development also indicates resumption of whole rise from 1.128. Positive reaction in yield to NFP would extend the rally, probably with upside acceleration, towards 1.1765 high. Such development could also lift USD/JPY through 112.07 near term resistance.