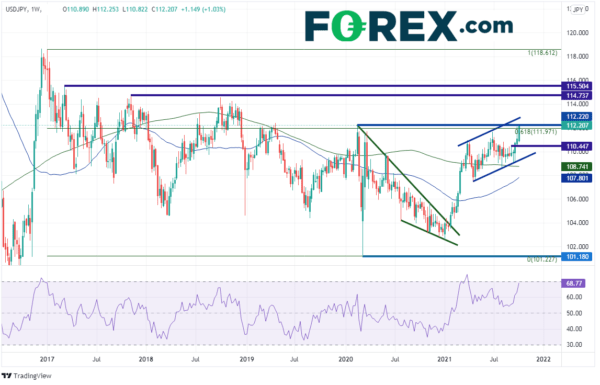 Earnings season is always a big deal for the markets; however, this earnings season will be particularly noteworthy.  As many analysts and economists feel that growth may have peaked over the summer, Q3 earnings will be closely watched for earnings that miss consensus and for companies that release downward revisions to guidance.  It all begins this week with banks!  In addition, China and Biden have agreed to meet virtually be the end of the year, however that seems to be about all the two can agree on.  Watch for more banter between China and the US this week.  Also, although Non-Farm Payrolls missed estimates, the revision to the August print made up for some of that.  Markets will still be digging through the details to try and determine if the Fed is ready to taper at its November 3rd meeting!

Earnings this week start off slow. However by the end of the week, most of the major backs on Wall Street will have reported.  The banking sector has already outperformed much of the S&P 500 this year.  It will be important to watch guidance to see if banks expect the out performance to continue.  According to my colleague Fiona Cincotta, here are the most important items to look for in bank earnings reports:

The prospect of the Fed moving to raise interest rates sooner rather than later has been a closely watched by the markets. A hike in rates would be good news for Net Interest Income at the banks. Such a move would widen NII margin, helping to explain why the banks have outpaced the broader market. However, with corporations issuing bonds and consumers making the most of their stimulus money to pay down credit cards, banks have struggled to grow lending.

Capital market underwriting, a boom in merger and acquisitions and record-breaking deal making is expected to boost revenue streams in those banks which dominate this area, namely, JP Morgan and Goldman Sachs.

Across the pandemic banks wrote off huge sums for bad loans reserves. Bad loans never materialized to the extent that was initially forecast thanks to fiscal and monetary support. Last quarter the banks released some of these reserves, inflating earnings. This is could well happen again this quarter.

US President Joe Biden and Chinese President Xi have agreed to hold a virtual summit by the end of this year.  This comes at a pivotal time as the US has recently accused China of not holding up their end of Phase 1 of the Trade Deal that was agreed upon under the Trump administration.  In addition, the Wall Street Journal reported last week that the US had military in Taiwan for at least a year and is sending additional forces over to train their military.  China has been flying aircraft over Taiwan as a show of force, as it seems they may be trying to provoke Taiwan into a war.  The US, UK, and Australia have also recently entered into an agreement to provide Australia with nuclear submarines, which is not sitting well with China.

Note that China is currently dealing with internal problems of its own, including continuation of the fight against the coronavirus, electricity issues, and the Evergrande blowup.  In addition, the government is cracking down on gaming and internet companies, online tutoring companies, and cryptocurrencies. Watch for more rhetoric between these two countries this week!

Both are correct; however, it only matters what the Fed thinks!  Powell has stated that he feels goals for employment are “all but met”.  Will these numbers be enough to push the Fed to taper at their meeting on November 3rd?

Monday is a bank holiday in the US and there are no market-moving central banks meetings to speak of this week.  However, the UK and Australia will release their September Jobs reports, the US will release CPI and Retail Sales for September, and Germany will release its ZEW Economic Sentiment Index for October. (Note that Germany’s August Factory Orders and Industrial Production numbers released last week were terrible).  Other important economic data releases this week are as follows:

Chart of the Week: Weekly USD/JPY USD/JPY has retraced 100% of its move from the highs at the beginning of the coronavirus, back to 112.20.  After reaching this high in February 2020, USD/JPY violently traded lower to 101.18 before bouncing back to 111.71.  From there, the pair grinded lower and formed a descending wedge as price approached 102.60.  USD/JPY then broke higher out of the wedge during the week of January 25th , 2021 and hasn’t looked back.  The target for the breakout of a descending wedge is a 100% retracement, which was reached on Friday. Price halted at the horizontal resistance.  Also in the area is the 61.8% Fibonacci retracement level from the highs of January 2017 to the recent January lows, near 111.97.  This is the “make or break area”.  If price moves higher this week, the next horizontal resistance isn’t until 114.74 and then 115.50.  If USD/JPY fails to move higher, horizontal support is near 110.45. The next support is the bottom, upward sloping trendline of a shorter-term channel near 109.10, just ahead of the 50 Day Moving Average at 108.74.

Looking at the economic data and the upcoming events, this seems like it could be a slow week. However, with earnings season just beginning, relations between China and US beginning to heat up again, and doubt remaining whether the Fed will taper on November 3rd, the recent volatility may continue.