U.S. – Nothing is Certain Except Debt and Taxes

The continued back and forth between Democrats and Republicans on the U.S. debt limit again captured headlines this week. While Democrats want a bipartisan suspension of the limit, Republicans have so far refused to play along. Cooler heads prevailed this week, as the parties reached a detente on Thursday. Senate Minority Leader Mitch McConnell proposed a short-term suspension of the debt ceiling until Democrats can pass a more permanent solution. The deal was accepted, and the Senate passed a $480bn debt-ceiling increase, which should keep the Treasury with enough money to pay its bills until December 3rd.

The key issue behind Republicans’ unwillingness to raise the debt limit is the President’s $3.5 trillion spending plan. Even among Democrats, there is not widespread agreement on such a large package. Since all Democratic Senate votes will be needed to pass the bill, party members have been busy trying to scale back bill expenses that will be financed through a slew of individual and corporate tax increases.

In economic news, the much-anticipated September jobs report was disappointing. The U.S. economy added 194k jobs over the month, much less than consensus expectations for a 500k increase. On the upside, the unemployment rate came in much lower than predicted, dropping to 4.8% from 5.2% in August. The rate fell due to stronger job growth in the household survey (+525k) but also due to a drop in the participation rate (Chart 1) and 183k persons leaving the work force. Employment in high paying sectors such as professional and business services were up (+60k), though the notable decline in education (-180k) was unexpected. The slow improvement in the labor force bears watching, as a persistent shortage of workers could weigh on the recovery going forward. 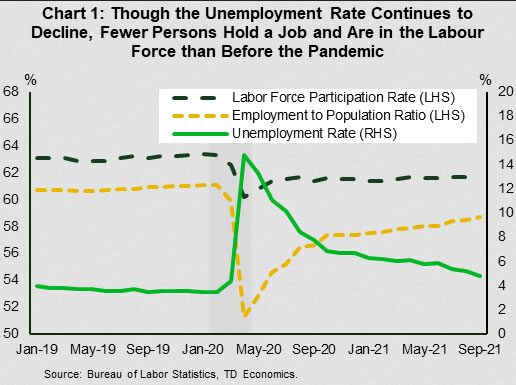 Elsewhere, the U.S. trade deficit hit a record in August on continued consumer demand for imports. The goods and services trade deficit widened to $73.3 billion in August from $70.3 billion in July. The deficit exceeded the previous record of $73.2 billion observed in June (Chart 2) as imports rose to a record high of $287 billion (+1.4% m/m), while exports rose by a smaller 0.5% to $213.7 billion. 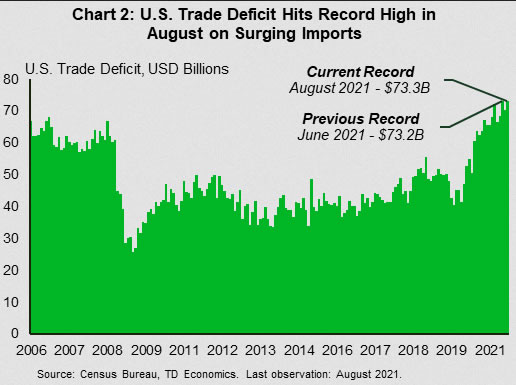 Notably, the goods deficit with China widened to $31.7 billion (up 10.8% m/m), the largest gap since July 2019, due to continued strong imports and declining exports. This dynamic highlights a key source of friction between the two nations. China has yet to significantly increase its imports of U.S. products – an obligation under the bilateral trade agreement implemented last year. The U.S. has noted that while the current Administration will begin new talks with Beijing, existing steep tariffs imposed by the Trump administration will remain in effect.

The best news of the week came from the ISM Services Index, which showed that U.S. service sector activity accelerated in September. The index nudged upwards to 61.9 from 61.7 in August, beating market expectations for a decline to 60. This suggests that demand remains well supported, and while supply challenges may hamper progress, the U.S. economy should continue to recover, supported by high savings and strong balance sheets.

North American gas prices rode the highs and lows observed in international markets this week, with European gas prices first surging amid the intensifying energy crisis, then calming as Russia (an important supplier to the continent), pledged to step in with additional supply. Oil also whipsawed in tandem with gas, although it rose later in the week, touching levels last seen in 2014, on signals that the U.S. wouldn’t tap its strategic reserve to help ease supply pressures (Chart 1). 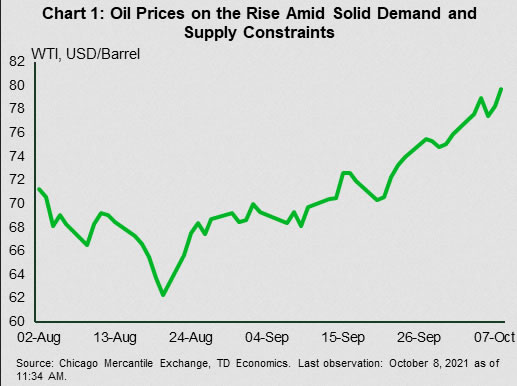 Equity market sentiment this week was boosted by news that the U.S. debt ceiling would be extended through to early December from its fast-approaching deadline of October 18th. Bond yields were also higher, although this likely reflects their correlation to U.S. rates, which have been on the rise.

Canadian data released this week generally offered an encouraging look at various aspects of the recovery, with the spotlight on construction, housing, international trade and job markets. Data released earlier this week pointed to construction activity remaining healthy in the near-term, as permit issuance was elevated relative to history in August. On the demand side, data from local real estate boards suggested that Canadian home sales may have managed a modest gain in September (full data is out next week), breaking a string of five straight monthly declines. Elsewhere, August’s international trade data showed an increase in export volumes alongside a drop in imports, signaling a positive growth contribution from net trade.

On the labour market front, this morning’s Labour Force Survey report showed an encouraging 0.7% m/m climb in the labour force, while the participation rate climbed to 65.5% – matching its pre-pandemic level. Of some note, employment dipped in a few industries that appear to be suffering from worker shortages, such as healthcare and social assistance and accommodation and food services. However, this is picking nits to a degree, as the rest of the report was very strong. Indeed, employment surged by 157k, bringing it all the way back to its pre-pandemic level. Compare that with the U.S., where the number of jobs is still 3.2% below where it was just before the pandemic struck.

The gain was also not driven by re-openings, as employment was higher in 10 of 16 industries. Hours worked climbed by 1.1% on the month, pointing to a good month for GDP which, in turn, would build in a nice hand-off for the fourth quarter. All in all, a very nice way to cap-off a busy week. 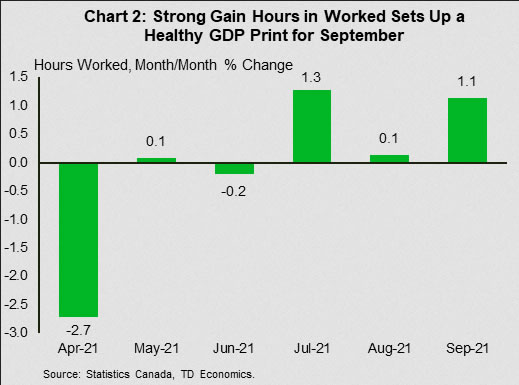