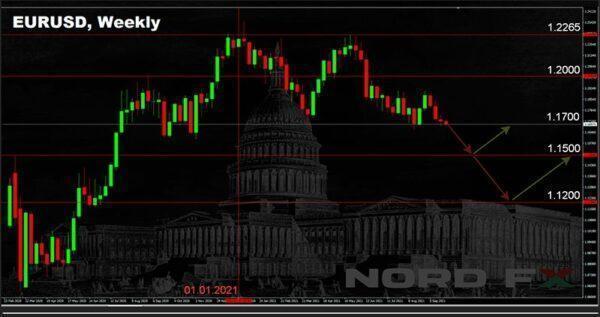 EUR/USD: First Down, Then Up

The global economy is recovering from the effects of the COVID-19 pandemic, and this process will continue in 2022. At least. The forecast for global GDP growth of 6% is maintained this year. Growth will continue (unless there are new “surprises”) to roughly 5% next year, according to preliminary forecasts. However, this is an average indicator, and it is the difference in the rates of recovery of the economies of different countries that will affect the rates of their national currencies. 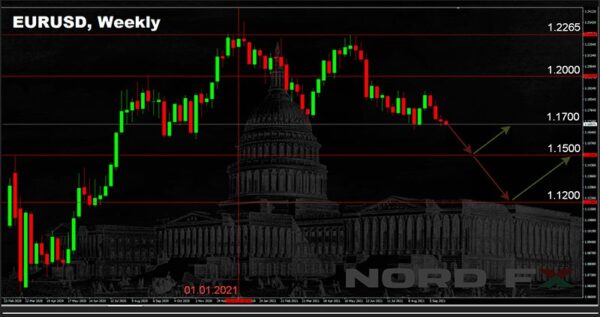 You can see quite different vector behavior of the EUR/USD pair since the beginning of the pandemic. Having started at 1.0635 in March 2020, the pair was already at 1.2350 in early January 2021. The weakening of the dollar has been affected by the intense pumping of the US economy with a huge dollar mass as part of the monetary stimulus (QE) policy implemented by the US Federal Reserve.

With the start of a new 2021 and the arrival of the administration of a new President Joe Biden in the White House, the market has a feeling of greater stability and the imminent winding down of QE. All the more so because macroeconomic indicators, particularly inflation and the labor market recovery, were encouraging. The dollar gained muscle and the EUR/USD pair dropped to 1.1700 by the end of March.

But dovish sentiment prevailed among the Fed’s leadership, the pumping of the economy with money continued, the beginning of the curtailment of the quantitative easing program was postponed indefinitely, and one could not even think about raising the base interest rate. And the pair rose above the important psychological level 1.2000 again, reaching the height of 1.2265.

The competition between the central banks of Europe and the United States certainly did not end there. But while the ECB’s rhetoric continued to be dovish, the statements of some Fed leaders already sounded a harsh hawkish note. Investors started to expect that the Fed would begin to roll back QE at the end of this year and will complete it in 2022, in order to start raising the discount rate in early 2023. And the dollar gained ground again, dropping the pair back into the 1.1700 zone.

At its September meeting, the American regulator did not announce any specific plans regarding the curtailment of the monetary stimulus program. But, if decision-making dynamics remain the same, the Fed will be ahead of the ECB by about six months.

As for the second half of 2022, according to a number of forex forecasts, the US economic situation will stabilize, while the “slow” Eurozone, on the contrary, will begin to gain momentum. A reduction in the European QE program and a rise in the euro interest rate could reverse the trend and return the pair to the 1.1700-1.2000 zone.

It is clear that the dynamics of the pair depends on many factors on both sides of the Atlantic Ocean: political, economic, and in recent years, epidemiological. One other major player is China, which also has a strong influence on the economies of both the Old World and the New World. Therefore, it should be understood that everything said is based on a vision of the situation at the moment, and can be (and should be) subject to adjustment many times over the coming months.

While there is a rough understanding and political and economic justification of forecasts with the major currency pair EUR/USD, things look much more complicated as far as cryptocurrency is concerned. Despite the assurances of influencers, this market looks more like the epicenter of mass speculation over the past 1-1.5 years, rather than a reliable investment platform. The year is not over yet, but bitcoin has already managed to soar from $28,550 in January to $64,800 in April, then collapsed to $29,300 in July, and then repeat this rally, only on a slightly smaller scale.

The rate of the BTC/USD pair can be influenced not only by the decisions of US regulators and the Chinese government, but even the mood Elon Musk has woken up in. One of his tweets can make you a millionaire or rip you to the bone. That’s why NordFX brokerage gives its clients the opportunity to make money not only on the growth, but also on the fall of cryptocurrency rates, even without having a single token in stock. Why take the risk and buy bitcoin and then sell it? After all, you can just open a sell trade right away.

Cryptocurrency forecast. Nobody knows exactly how much the reference cryptocurrency will cost. Expert opinions vary widely. Some, like Standart Chartered, see $100,000 by the end of this year, and some predict a rise to the same $100,000, but only by the end of 2022. And some, like the Nobel laureate Robert Schiller, are sure that this bubble will burst soon, burying the two trillion USD plus that the investors have invested in this market.

Much will depend on the recovery of the US economy, the pace of the winding down the monetary stimulus (QE) programme, the prospects for the Fed raising interest rates and the dynamics of treasury yields. These are factors that can severely reduce the risk appetite of institutional investors and return them to more familiar financial instruments.

For ethereum, the forecast of Standard Chartered experts is as favorable as for bitcoin and looks very optimistic. A range of $26,000-35,000 per coin was announced in an interview for Reuters. But that’s not the limit either, especially if the bitcoin rate approaches $175,000 by the end of 2022.

According to a report by the major investment bank Goldman Sachs published in Forbes, the base cryptocurrency has the chance to lose its leading position, giving way to ethereum. Goldman Sachs believes that the main reason for the popularity of the main altcoin is the ability to create new applications. And also the fact that many financial instruments can be replaced on the basis of its platform. This includes, among other things, loans and other banking operations.

As for real, not digital, gold, a number of expert advisors believe that this precious metal has yet to run out of growth potential in 2022. They do not rule out that the XAU/USD pair could break the August 2020 record and rise to $2,200-2,300 per ounce. However, the price performance of this reserve asset will also depend on investors’ willingness or reluctance to take risks, as mentioned above.