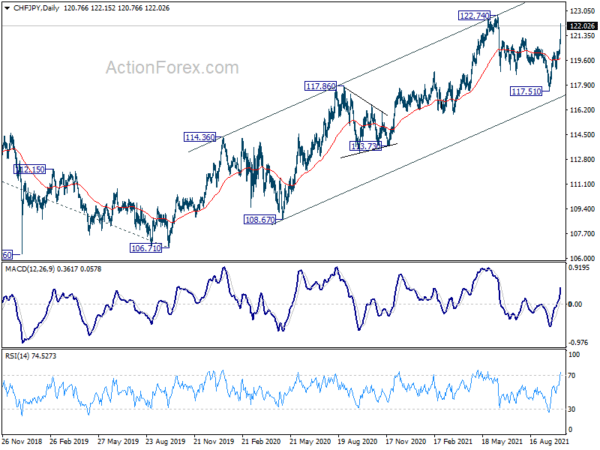 Overall outlook in the financial market is unchanged, with Yen selloff as the main theme, as major global treasury yields continue to march higher. Euro is second weakest after ECB officials talked down the threat of inflation. Australian Dollar is trading broadly higher, followed by Kiwi. Dollar, Sterling and Loonie are mixed, with the greenback trading with a lower hand.

Technically, even Swiss Franc surges sharply against Yen as seen in the strong rally in CHF/JPY. Such development suggests that correction from 122.74 has completed at 117.51. Decisive break there will resume larger up trend from 2019 low at 106.71. If happens, there could be another round of upside accelerations in Yen crosses in general. 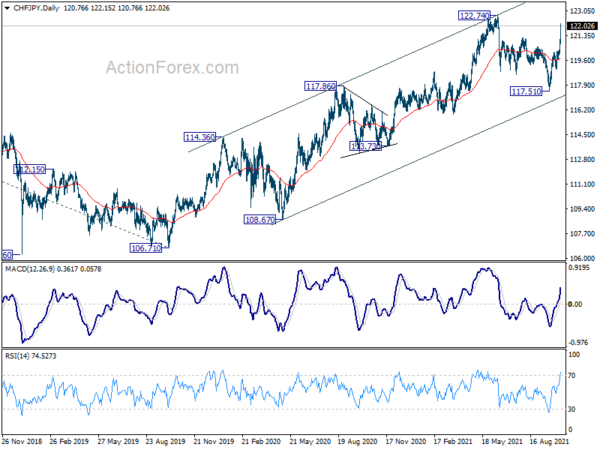 ECB Lane: We’re some distance in terms of medium term from 2% inflation

ECB’s chief economist Philip Lane said today, “the medium-term inflation dynamic is too slow, not too fast.” “We still think we’re some distance in terms of medium term from 2%,” he added. “The trigger for monetary policy action is not there.”

“In addition to rate forward guidance, calibrating the volume of asset purchases also plays an important role in ensuring that the monetary stance is sufficiently accommodative,” said.

“The compression of term premia through the duration extraction channel plays a quantitatively-significant role in determining longer-term yields and ensuring that financing conditions are sufficiently supportive to be consistent with the delivery of our medium-term inflation objective.”

ECB Governing Council member Klaas Knot said “I still expect the rise in inflation to be largely temporary, but we have to take other scenarios with structurally higher inflation and higher interest rates into account. Because if we don’t, it could lead to shock price falls in the future.”

“The effect of energy prices on inflation is temporary by nature, as they need to keep rising to keep pushing up inflation”, Knot said. “But inflation is also pushed higher by global supply restraints, which might be less temporary. They could be caused by a readjustment in international trade, as supply chains are spread less across the globe.”

Canadian Dollar is extending near term rally, with help from rising oil price as WTI breaks above 81 handle. EUR/CAD is also accelerating down, and it’s now close to 61.8% projection of 1.5783 to 1.4580 from 1.5096 at 1.4353. The reaction to this projection level could set the tone in EUR/CAD for the near to medium term.

Note that firstly, EUR/CAD was previously rejected by 55 week EMA, which is seen as a medium term bearish development. Secondly, the cross has also broken a long term trend line support as seen in weekly chart, which is another bearish development. Sustained break of 1.4353 projection level could bring another round of downside acceleration through 1.4263 support, towards 100% projection at 1.3893. 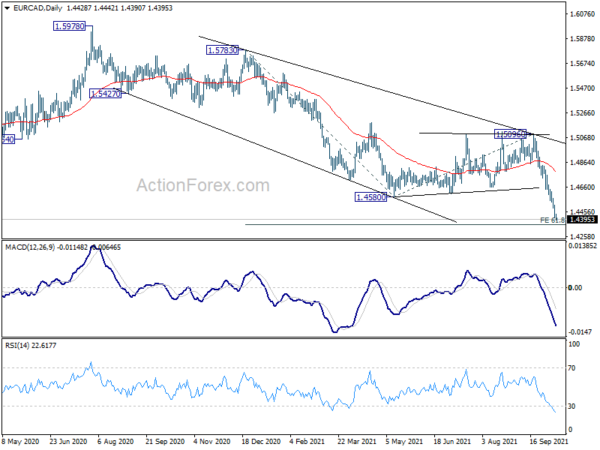 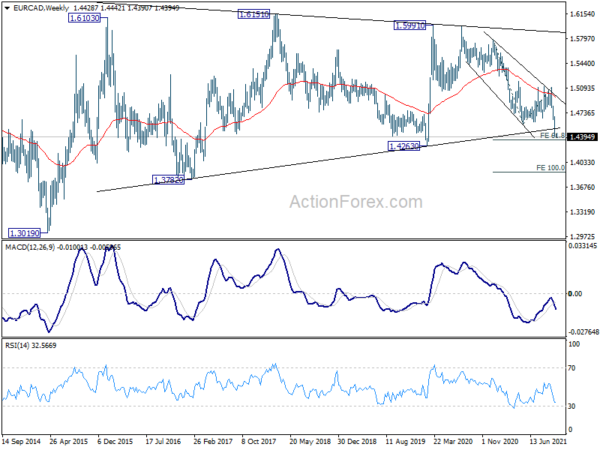 AUD/JPY accelerating up, to target 85.78 high

AUD/JPY follows other Yen crosses and accelerates higher today. The decisive break of 82.01 resistance firstly confirms resumption of rebound from 77.88. More importantly, it also affirms that correction from 85.78 has completed. Immediate focus is now on 100% projection of 77.88 to 82.01 from 78.82 at 82.95. Strong break there would indicate further upside acceleration and raise the chance that it’s