Dollar Firms Up Slightly after CPI, But No Follow Through Buying Yet 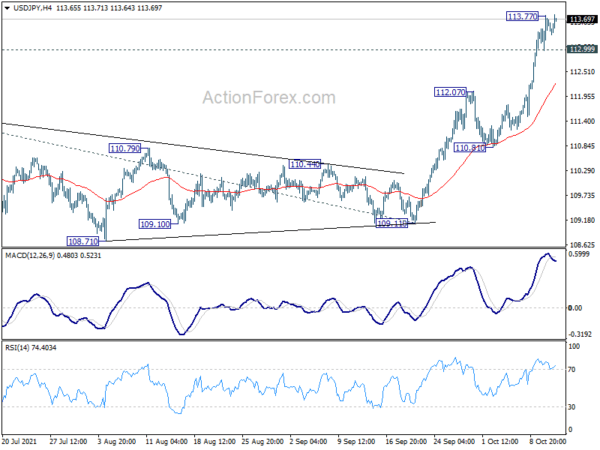 Dollar firms up mildly in early US session as headline CPI was back at multi-decade high, which core CPI remains stubbornly strong. The gain in the greenback is so far limited. Overall markets continue to trade in consolidative mode, with mild weakness seen in commodity currencies while Swiss Franc and Euro are rebounding. Next focus is FOMC minutes, but they are unlikely to unveil anything spectacular, other than that Fed is ready to start tapering by the end of the year.

Technically, as Dollar is trying to recover, we’ll look at 1.3542 minor support in GBP/USD and 0.7287 minor support in AUD/USD. Break of these level could be a sign that Dollar buying is back. If that happens, we’d also have to seen if EUR/USD would reaccelerate down, while USD/JPY reaccelerates up, to confirm.

NIESR said supply constraints are growing and likely to persist through in Autumn. It forecasts UK GDP to grow 1.5% in Q3, followed by 0.8% in Q4. That included an estimated 0.4% mom growth in GDP in September.

Rory Macqueen Principal Economist, NIESR: “The reopening of the economy continued to support growth in August, with the popularity of domestic holidays contributing to 23 per cent month-on-month growth for hotels and campsites in particular. The fact that consumer-facing services remain 5 per cent below their peak suggests ample room for future catch-up in future too. Elsewhere a further fall in construction output may have been down in part to a reported increase in input costs: something likely to affect the economy more broadly if shortages lead to more generalised price rises over the autumn. The coming months could see something of a two-speed recovery, with sectors most affected by shortages in decline while others continue to recover.”

Also from the UK, goods trade deficit widened to GDP -14.9B in August, versus expectation of GBP -11.9B.

Westpac expects RBA to “almost certainly maintain its policy settings” at November 2 meeting. Instead, the next change is likely to be another round of tapering in February. Looking forward, Westpac expects a rate hike in Q2 of 2023, while RBA has repeated said the conditions of hike won’t be met until 2024.

ANZ said the survey is telling a story of “remarkable resilience”, with most forward-looking activity indicators holding up or improving. Inflation pressures remain “intense” and cost pressures are “extreme”.