The Bank of England’s policy meeting on Thursday is being primed as a live one following a series of strong hints by policymakers that interest rates might have to be raised before the year-end. With November being a ‘Super Thursday’ meeting when updated economic projections and a press conference accompany the decision (due at 12:00 GMT), a rate hike this month rather than in December is more likely. But the real question is, does everyone on the Monetary Policy Committee (MPC) support a pre-emptive tightening? Judging from the pound’s latest moves, many traders do not seem to think so.

Just a few weeks ago, market pricing for a rate hike in November was near zero. But a carefully coordinated attempt by the Bank of England, starting with the September meeting statement, has pushed up the odds to more than 50%. Markets initially didn’t take much notice of the change in the Bank’s forward guidance in September that signalled a rate increase could become appropriate before asset purchases end in December. Many thought it was simply jawboning on the part of policymakers to rein in rising inflation expectations.

Several hints later from Governor Andrew Bailey, investors are in no doubt that a rate rise of 15 basis from 0.10% will be discussed at the meeting. The trouble for Bailey, though, is that at least three MPC members will likely vote against a rate increase this month. Four, including Bailey, are expected to vote in favour, which leaves the outcome in the hands of Deputy Governor Ben Broadbent and Jon Cunliffe. Neither have made remarks recently but they are not considered to be particularly hawkish. 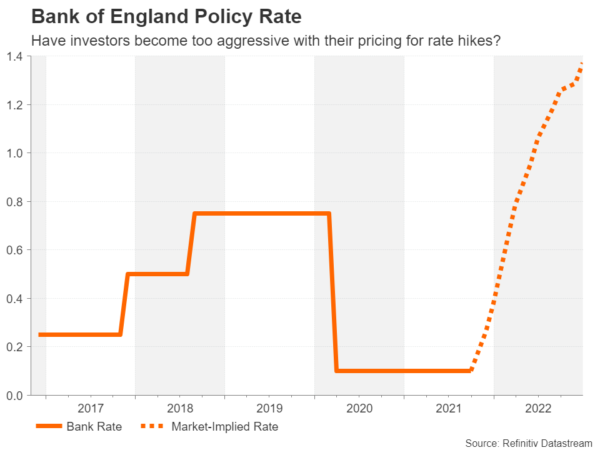 Market expectations for a rate rise have been pared back somewhat over the past couple of weeks, not so much by what policymakers have or haven’t said, but rather from worries about the outlook for the UK economy. Investors are concerned that whilst supply constraints and soaring fuel costs will push up inflation, those same factors will hold back output by manufacturers and curtail spending by consumers, hurting the recovery.

For UK businesses, there is also the lingering tension between London and Brussels to contend with. Although there’s been encouraging progress lately on the Northern Ireland protocol to ease border checks between the province and mainland Britain, a fresh row with France over fishing has erupted. France is threatening to block British fishing boats at some of its ports and tighten checks on UK goods if Britain doesn’t allow more French vessels to fish in its waters.

Has Sunak’s Budget emboldened the hawks? Another headache for businesses are rising wage pressures, which are being exacerbated by the government’s tough post-Brexit immigration rules as well as by plans to raise the minimum wage, as announced by Chancellor Rishi Sunak in last week’s Budget. On the bright side, Sunak also outlined plans to boost spending by £75 billion, which should support growth.

In fact, the government’s spending spree has probably strengthened the case for policy action in November as the Bank frets about surging inflation expectations. Both consumer- and market-based inflation expectations in the UK have skyrocketed lately and the BoE doesn’t appear to be as confident as some other central banks that the supply disruptions that are triggering the jump in the prices of raw materials, energy and other commodities will be resolved anytime soon.

Key technical hurdles for pound advances If the hawks manage to win the argument and the BoE ups the Bank Rate to 0.25%, the pound could climb back above the $1.37 level against the US dollar. However, the 50-day moving average and the 38.2% Fibonacci retracement of the June-September downtrend at $1.3730 are situated slightly above, making this a strong resistance area. Further up, the $1.38 level is potentially another critical test for cable as it is currently being intersected by the descending trend line.

On the flip side, if the BoE lives up to its reputation of being the “unreliable boyfriend” and confounds expectations of a rate hike by holding policy steady, the pound could slip below the 23.6% Fibonacci of $1.36, which if broken, would clear the way for a revisit of the September trough of $1.3410.

Aside from the decision on rates, investors will also be keeping an eye on the projected rate path in the latest Monetary Policy Report. A steeper or shallower rate path might even have a more powerful impact on sterling than any potential change in the Bank Rate on Thursday, not to mention the inflation forecasts. An upward revision in forecasted inflation would likely be positive for the currency, while in the most extreme hawkish scenario, the BoE could also announce it is ending its QE programme early.

If, though, the only headline from the meeting is the predicted rate hike, sterling could find itself back at the mercy of the US dollar, and more specifically, the Federal Reserve’s own policy decision on Wednesday.