The Weekly Bottom Line: Supply Chain Strain is the Name of the Game

U.S. – Supply Chain Strain is the Name of the Game

With inflation running above 5% and proving more persistent than Fed officials had expected, the Federal Open Market Committee’s (FOMC) announcement this week was highly anticipated. Unsurprisingly, the FOMC decided to leave the target range for the fed funds rate unchanged at 0-0.25%, noting that there are still improvements to be made in the labor market. The committee also delivered on widely held expectations that they would begin to taper their asset purchase program. The Fed will begin reducing the pace of its securities purchases by $15 billion per month, signaling that the tapering process will be completed by mid-2022. This should give the central bank greater flexibility to respond should inflation pressures become more pronounced.

Some of the Fed’s concern about the labor market may be alleviated by the job report this week that showed a net 531k positions added to payrolls and the unemployment rate down 0.2 percentage points to 4.6% in October. This comes on top of a combined 235k upward revision to the job numbers for August and September. Job gains were relatively broad-based with the notable exception of employment in the public sector (Chart 1). 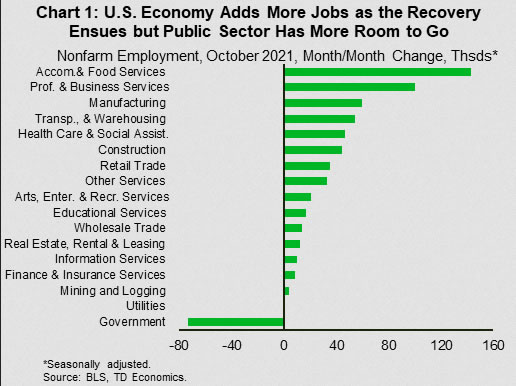 Another punch of good news for the U.S. economy – the ISM services index suggests that the service sector is running on all cylinders. The index rose to 66.7 in October (from 61.9 in September) – the highest level on record. The business activity sub-index rose by 7.5 points to 69.8 and new orders by 6.2 points to 69.7 – both record highs. The new export orders sub-index also moved higher to 62.3 – a 2.8 point increase.

While services are driving ahead, expansion in the manufacturing sector cooled in October. The ISM manufacturing index declined marginally to 60.8 from 61.1 in September. All sub-indexes signaled expansion, with the highest among them the supplier-deliveries index (Chart 2). Usually, a high reading is an indication of robust manufacturing activity, however the sub-index is currently spiking for all the wrong reasons – supply-chain bottlenecks and labor shortages – issues which are hampering manufacturing output. 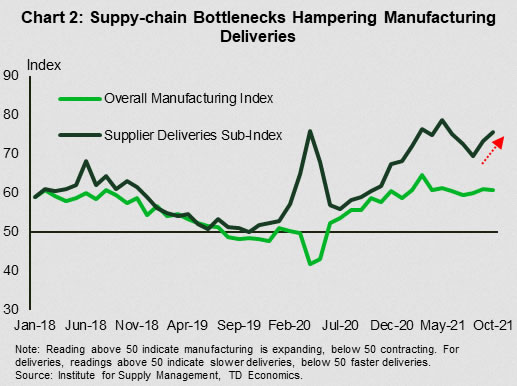 Turning to vehicle sales, another sector of the U.S. economy that has been stymied by supply shortages, there was an uptick in sales in October, after five consecutive months of decline. Vehicle sales rose 6.5% in the month to 13 million units. Supply bottleneck issues have weighed heavily on auto production, resulting in tight inventories. As a result, new vehicle prices are up a whopping 20% relative to year-ago levels.

Further evidence that U.S. domestic demand is ahead of much of the rest of the world, the U.S. trade deficit widened again in September, reaching a record level for the third consecutive month. The widening deficit was driven by a 3% decrease in exports and a 0.6% increase in imports.

With ongoing evidence of demand resiliency, the Fed is likely to continue to signal the gradual withdrawal of policy support. The first hike in the federal funds rate is likely to follow shortly after the end of asset purchases, with at least one more to come before the end of 2022.

Central banks have pivoted to a more hawkish tone in recent months, preparing markets for a reduction in the extraordinary monetary policy support they have provided since the start of the pandemic. Last week, the Bank of Canada announced an end to its QE program and pulled forward expectations of the first rate hike. This week, the Fed and the Bank of England were on the docket.

As widely expected, the Fed announced it will start tapering its asset purchases, however, the Bank of England disappointed expectations for a rate increase, leading to rally in global bond markets on Thursday. As a result, after rising briskly last week, Canadian bond yields eased off toward the end of this week. Still, 5-year yield remains more than 50 points higher than it was in mid-September.

An increase in bond yields has led fixed mortgage rates higher, however, activity in the Canadian housing market has yet to reflect that. Data from several regional real estate boards this week showed that both home sales and prices strengthened in October. Price gains continue to be supported by demand-supply imbalances, as the inventory of homes on the market – already at low levels – fell further in the month, while demand remained strong. Even as the housing market appears be reaccelerating, a double whammy on affordability stemming from higher prices and borrowing costs is expected to cool demand in the coming year.

The housing market is not the only one dealing with supply-demand imbalances. As we discuss in this week’s report on food prices, food manufacturers have been feeling the squeeze, prompting them to raise prices. Unsupportive weather has hit crop production and inventories globally, as well as in Western Canada, and agricultural input costs, such as energy, transportation and fertilizer are rising. While shelter and transportation are still the main culprits behind hot inflation figures, retail food prices have become a bigger contributor (Chart 1). The above-mentioned headwinds suggest that retail food prices could remain elevated for some time. 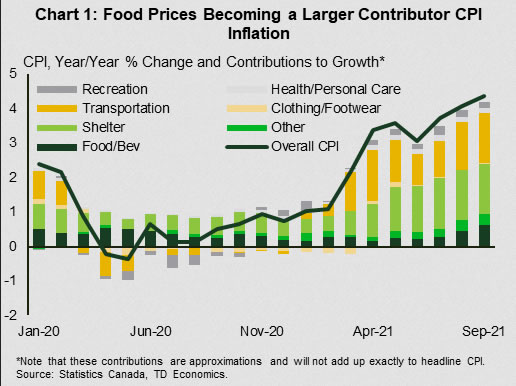 While some of the supply-side factors stirring inflation higher should begin to dissipate, others – such as significant excess savings by households and potentially higher wages – represent an upside risk (report). This week’s jobs report showed that the labour market continued to climb in October, adding 31k new jobs (Chart 2). The unemployment rate fell 0.2 points to 6.7%, while total hours worked rose by a robust 1%. The pace of hiring was slower than the outsized gain in September, but still signaled improvement. As long as economic recovery continues, the Bank of Canada will look to begin normalizing interest rates sooner rather than later, mitigating the risk of falling behind the inflation curve as well to financial stability from overheated asset markets.