Dollar Braces for US Inflation Report

The latest US inflation data will be released at 13:30 GMT Wednesday. Forecasts point to another sharp acceleration, which could unleash turmoil in the markets as the transitory narrative melts away. As for the dollar, the outlook remains positive with the American economy out-recovering most of the world and Congress bringing more spending to the party.

The US economy is in pretty good shape, considering the chaos in global supply chains. Consumption has remained resilient, lost jobs are coming back quickly, and business surveys point to stronger economic growth in the final quarter.

Meanwhile, Congress has approved an infrastructure package that will bring $550 in new spending to the table and the White House continues to ‘twist arms’ to pass the larger $1.75 trillion social safety net bill. This stimulus would be spread out over several years so it wouldn’t really turbocharge the economy, but it’s still great news. 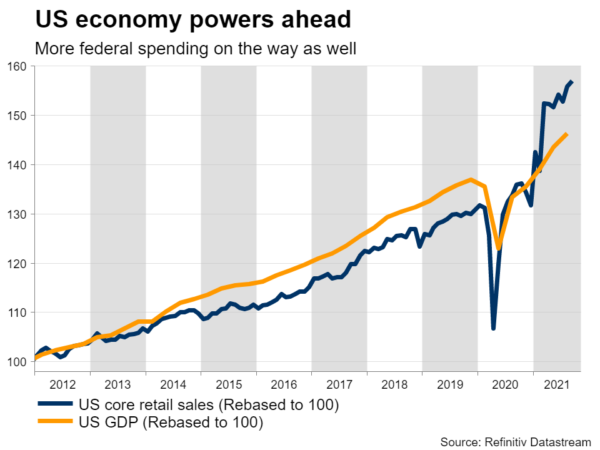 The elephant in the room is inflation. What started out as a short-lived supply shock is looking less transitory by the day. It’s not just shipping delays and energy prices anymore. Higher costs are increasingly being passed down to consumers, rents are firing up to keep pace with house prices, and wage growth is accelerating as companies compete to attract workers.

This is why the upcoming inflation report will be so important. If price pressures continue to spread out into different sectors, it is difficult to argue that this inflation episode remains transitory. 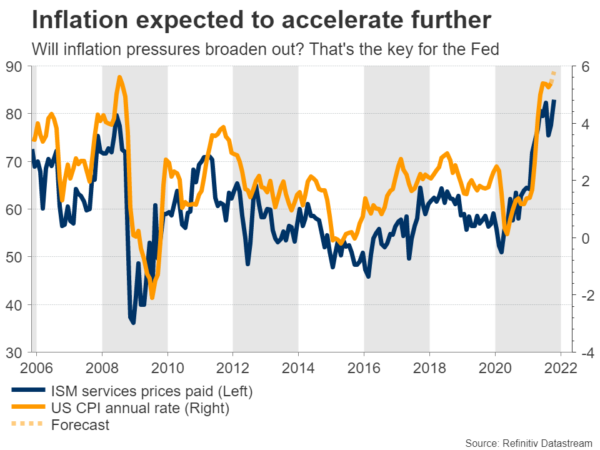 The annual CPI rate is expected to have jumped to 5.8% in October, from 5.4% previously. Similarly, the core rate that excludes volatile items like food and energy is forecast to have reached 4.3%, a considerable increase from the 4% last month.

If anything, the risk is for a positive surprise considering what business surveys revealed during the month. The Markit PMIs showed that companies raised their selling prices ‘at the fastest pace on record’ while the price components of both ISM surveys rose sharply too.

In the FX complex, the dollar has been trading sideways for almost a month now, but the bigger picture remains positive and an upside inflation surprise could reignite the rally. It all comes back to the strength of the US economy. 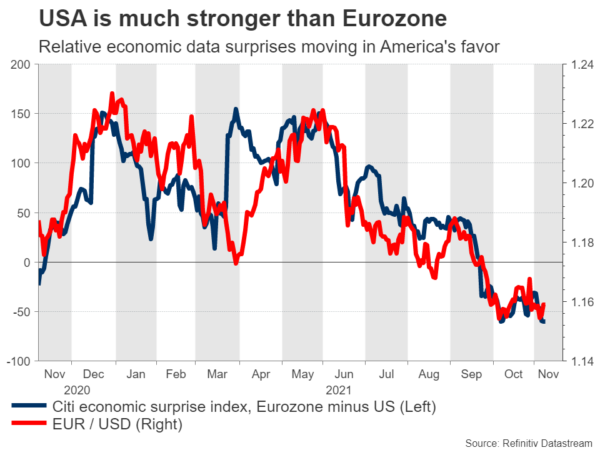 With wage growth accelerating and inflationary pressures broadening out, the Fed might need to step on the brakes aggressively. Money markets are currently pricing in two rate increases for next year, so there’s scope for a hawkish shift towards three hikes if inflation keeps rising.

In contrast, the Eurozone has taken a sharp hit from the energy crisis and paralyzed supply chains. Business surveys point to slower growth ahead, which implies the European Central Bank is unlikely to raise rates next year as market pricing currently suggests. This keeps the risks surrounding euro/dollar tilted to the downside.

Taking a technical look at euro/dollar, the 1.1525 zone could provide initial support to any declines. A potential violation would turn the focus to 1.1420.

On the upside, the first major barrier for the bulls would be the 1.1685 area, which roughly encapsulates the 50-day moving average and the downtrend line drawn from the May top as well.

But the ECB isn’t the only central bank that might disappoint. The same is true for the Reserve Bank of Australia and the Bank of England. Neither economy is particularly strong, so the current market pricing for three rate increases in Australia next year and four hikes in Britain seems unrealistic. Again, this implies aussie/dollar and sterling/dollar are both vulnerable.

The final argument in favor of the reserve currency is that it offers protection against stock market declines. With the S&P 500 having gained 27% this year alone despite several risks on the radar, this safe haven status could come in handy.