USDCHF Crossed Below Its 50- and 200-Day SMA; Bearish Outlook

USDCHF regained its negative momentum as the pair crossed below its 50- and 200-day simple moving average (SMA) in the past couple of sessions. This diminished hopes of a sustained bullish move after a brief period of price appreciation when the 50-day SMA had crossed above its 200-day SMA.

The bearish outlook and the recent price depreciation are also supported by the short-term momentum indicators, as the RSI is hovering below 50, while the MACD has dropped below zero and its red signal line.

Should the price break below its 0.9084 support, the bears might then target the 0.9018 level. A further descending movement from this barrier could intensify selling pressure, sending the price to test the 0.8924 obstacle. Breaching this barrier too could pave the way towards the 0.8846 level, strengthening the pair’s negative momentum.

On the flip side, if the price breaks above its 200-day SMA currently found at 0.9156, the bulls might target the 50-day SMA currently at 0.9210. Any advancements beyond that crucial level could turn the cards around for the pair, reviving its positive momentum. This could send the price to test its 0.9228 resistance, before moving higher towards the 0.9369 level.

In brief, the overall outlook for the USDCHF is bearish. However, this might change if the price breaks above its 50-day SMA, reviving positive momentum, while breaking below the 0.8846 level, could reinforce the pair’s negative bias. 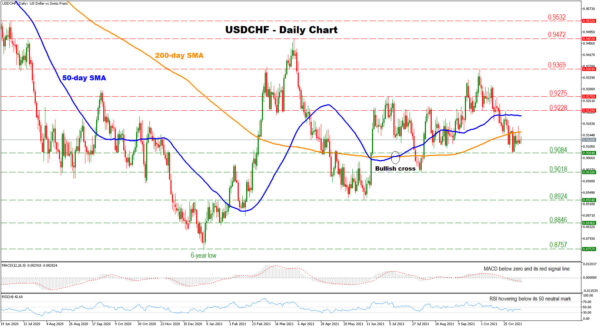