The euro has been demolished by fears that new lockdowns will hit economic growth. This has turbocharged the dollar as traders look for shelter, and the upcoming business surveys will be crucial for whether this rotation continues. Meanwhile, markets are split on whether the Reserve Bank of New Zealand will deliver a single or double rate increase, leaving the kiwi vulnerable in case the central bank ‘plays it safe’.

The single currency has been taken to the cleaners lately as several risks threaten to hamstring economic growth. A sharp spike in covid cases across Europe has seen the Netherlands and Austria impose lockdowns again, raising concerns that Germany could follow soon.

Then there’s the spiral in energy prices squeezing consumers and simultaneously providing fuel for anti-European forces in France ahead of next year’s presidential election. And with the Chinese economic machine slowing down, demand for European exports seems shaky. 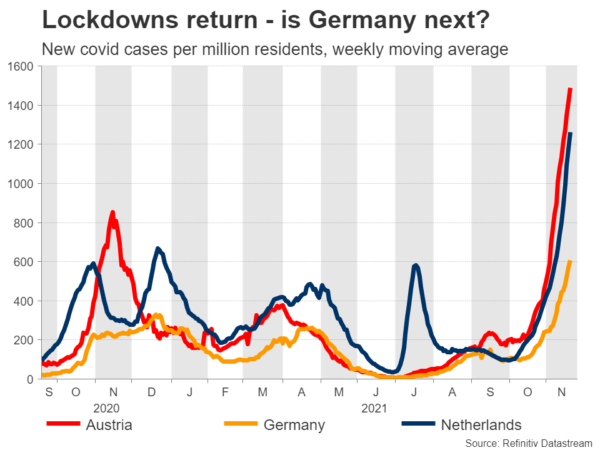 In this light, it’s quite surreal that money markets continue to price in a minor rate increase by the European Central Bank next year. Derivatives traders are essentially betting that intensifying inflationary pressures will eventually force the ECB’s hand. However, that’s very unlikely.

The ECB knows the economy isn’t strong enough to handle higher rates, with the labor market still miles away from recovering. Rate increases could also revive fears around the fiscal health of large indebted economies like Italy, sparking havoc in bond markets. 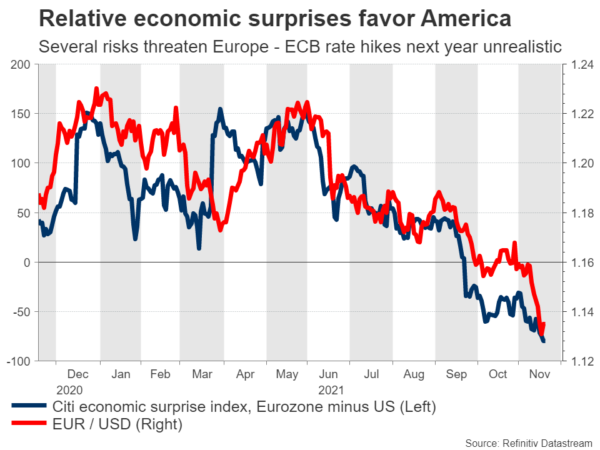 A barrage of PMI business surveys coming up on Tuesday could finally convince investors the ECB is unlikely to raise rates next year. Between new covid restrictions, higher inflation eating into profit margins, and China’s slowdown, there’s a strong risk the PMIs sink further, dealing another blow to the devastated euro.

Fed minutes on the menu

In sharp contrast, the dollar has obliterated its competitors lately as a string of encouraging data fueled expectations for earlier Fed rate increases. Money markets are now pricing in two rate hikes for next year and a 35% chance for a third one. 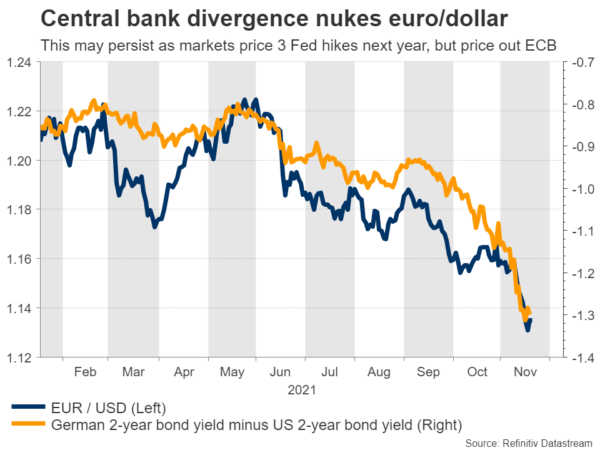 America is probably the strongest major economy at this stage. Consumption is booming, inflation is sizzling hot, lost jobs are coming back quickly, wage growth is firing up, and business surveys point to a powerful spell of growth ahead. On top of everything, Congress is about to bring more spending to this party.

The coming week will bring a storm of US releases. The preliminary Markit PMIs for November are out on Tuesday ahead of durable goods orders, the second reading of GDP for Q3, personal income and consumption, and the core PCE price index – all on Wednesday. A few hours later, the minutes of the latest Fed meeting will hit the markets. 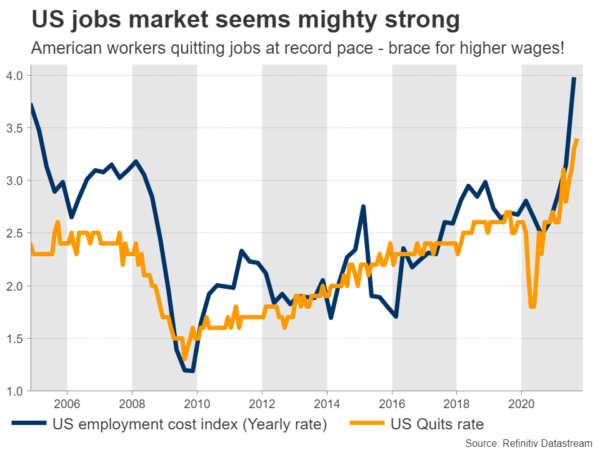 Most of the focus could fall on the PMIs as they are forward-looking indicators. There’s still scope for a third Fed rate hike to be baked in for next year, so if they reaffirm America’s economic supremacy, the dollar could get another shot in the arm. The minutes are always important too but are unlikely to reveal anything new, as most policymakers have spoken publicly since then.

There are solid arguments why monetary policy needs to be tightened. The unemployment rate hit a record low in Q3, inflationary pressures are intensifying, and the housing market is on absolute fire. However, going for a ‘double’ rate hike seems unnecessary. 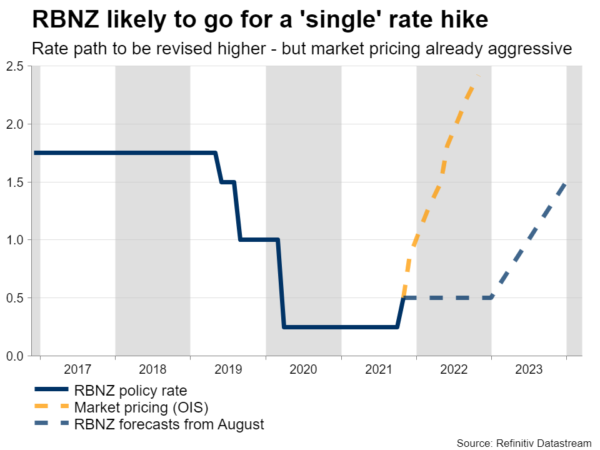 Such a drastic move would risk shocking the economy at a time when there are still several risks on the radar – from covid infections spreading across the country to China’s slowdown threatening demand for New Zealand’s commodity exports.

So while surprises from the RBNZ are always possible, the most likely outcome is just a ‘single’ rate increase that disappoints the kiwi considering how elevated market expectations are.

Across the Tasman Sea, it’s a busy data week in Australia too. The PMIs for November are out on Tuesday, ahead of capital expenditure numbers for Q3 on Thursday and the final estimate of retail sales for October on Friday.

Sinking iron ore prices and a stronger US dollar have hammered the aussie lately, and the pain could continue as markets are still pricing in three rate increases from the Reserve Bank next year, which seems excessive. The Australian economy is not that strong and could suffer serious collateral damage if China’s slowdown deepens. 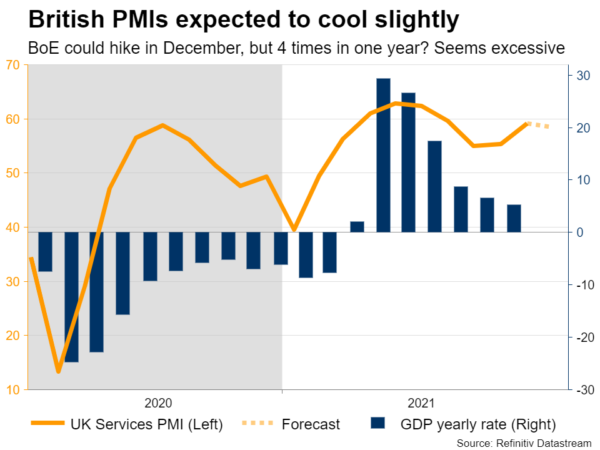 Last but not least, the British pound could enjoy some volatility with the release of PMIs for November on Tuesday. Sterling was the only major currency to hold its nerve in the face of the dollar’s onslaught lately, even managing to touch new post-pandemic highs against the euro.

That likely boils down to hopes the Bank of England will raise rates in December, which seems plausible given the strength of recent data. Markets are only pricing a 50% probability for a rate hike next month, so there is room for more short-term gains. That said, hiking rates four times by this time next year as money markets currently suggest is a bridge too far, which allows scope for longer-term disappointment.