Euro tumbled broadly and deeply last week, and ended as the run away worst performer. It’s firstly weighed down by dovish comments from ECB officials, who talked down the need for policy action to counter inflation. More importantly worries grew after Austria returned to full lockdown.

Daily new COVID-19 infections in Austria jump to 15k level, comparing to less than 10k in the first wave back in November last year. Daily deaths in Austria also rose back to above 50. The concern is that Germany, with daily infection at around 60k comparing to 30k in prior peaks, could follow soon. There is much downside risks, technically and fundamentally, for the Euro going ahead.

In other parts of the currency markets, Australian Dollar ended as the second weakest, followed by Swiss Franc. Sterling was the strongest one as strong inflation reading continued to push expectations of a imminent BoE rate hike. Dollar was the second strongest but Yen also regained some spotlight as overall risk markets turned mixed.

EUR/CHF downside break out as long term down trend resumes 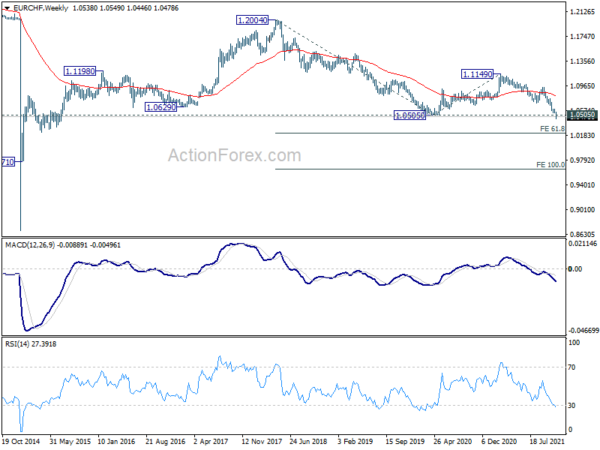 EUR/GBP also resumed the down trend from 0.9499 last week by breaking 0.8401 support. Outlook is starting to get more bearish with rejection by 55 week EMA. Weekly MACD could also be starting to turn downward, suggesting increasing downside momentum. For now, we’d still expect strong support from 0.8276 to contain downside, at least on the first attempt. However, sustained break there will carry long term bearish implication, and could drag the cross further lower to 61.8% retracement of 0.6935 to 0.9499 at 0.7914 and even below. 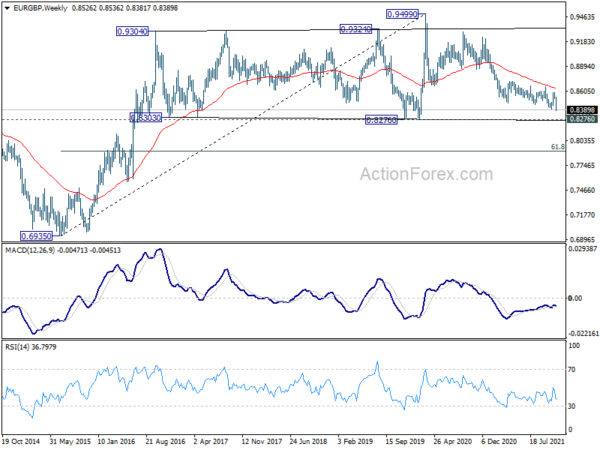 GBP/CHF rebound strongly last week on increasing expectation that BoE would be forced to act on interest rate soon, by stronger than expected surge in consumer inflation. The development does suggests that correction from 11.3070 has completed at 1.2275, after defending key resistance turned support at 1.2259. That in turn keeps long term bullishness that whole up trend from 1.1107 (2020 low) is not finished. Yet, we’d like to sustained trading above 55 day EMA (now at 1.2541) and 55 week EMA (now at 1.2549) to give us more confidence on this bullish case. But, if this bullish case turns out to be true, GBP/CHF could accelerate ahead to 1.2816 resistance with a strong break. That could be translated into downside acceleration in EUR/GBP, which then solidify Euro’s overall bearishness. 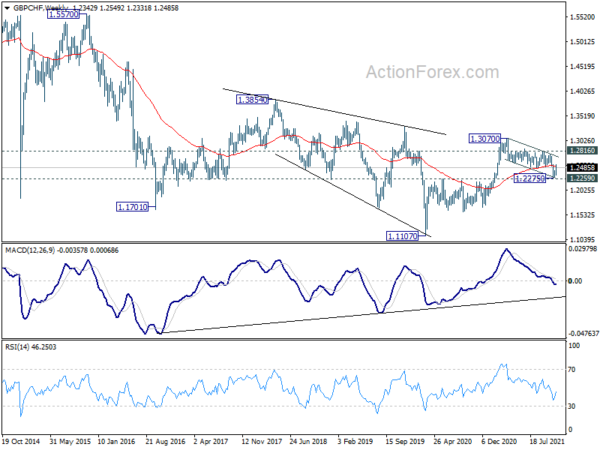 The question remains on whether the corrective pattern from 103.82 (2017 high) is complete with three waves to 89.20. Or, it’s a triangle pattern in it’s fourth leg. The medium term momentum above 97.72 fibonacci level will reveal some hints on which case it is. For now, we’ll just keep monitoring the development first. 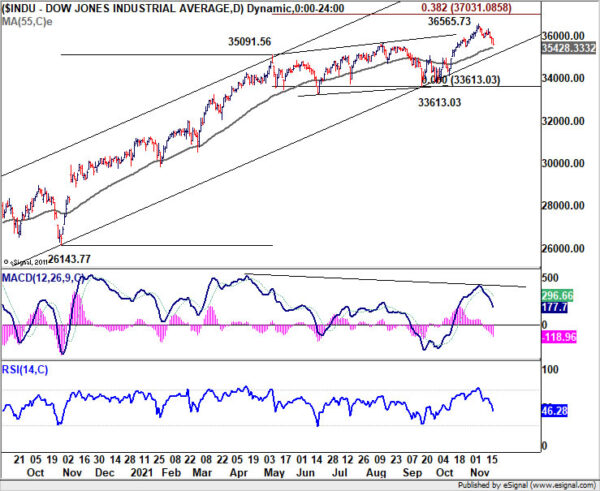 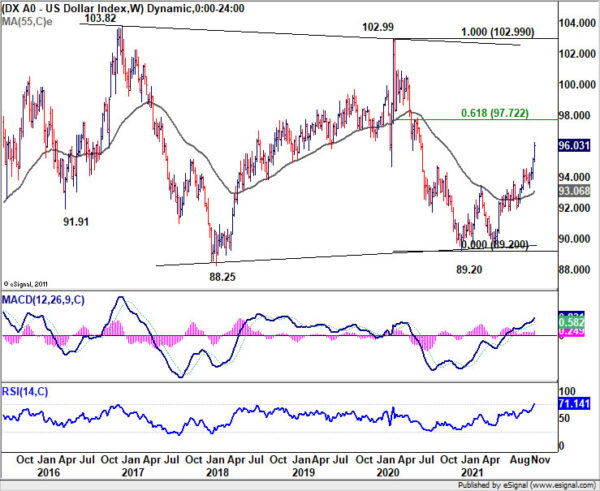 NASDAQ made new record but DOW headed down 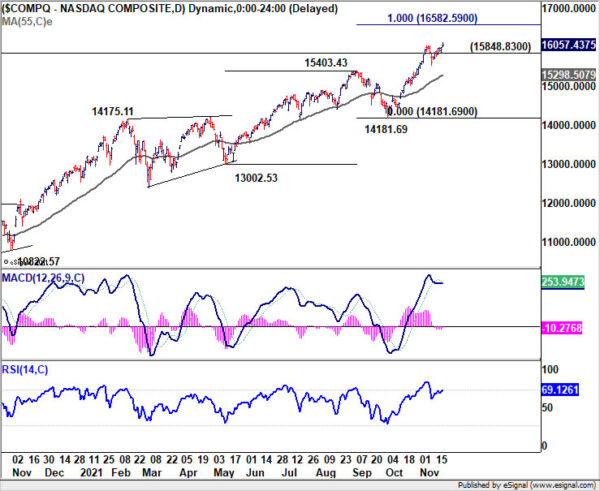 DOW, on the other hand, extended the corrective fall from 36565.73 last week. 55 day EMA (now at 35428.33) is likely to be tested soon, together with channel support at around 35062. Rebound from this zone will maintain medium term bullishness for another rise through 36565.73. However, sustained break there will indicate that medium term top was already formed, and open up deeper fall to 33613.03 support and even below. We’d see very soon if risk-on markets could persist into the end of the year, or not.

EU/JPY’s decline from 133.44 accelerated to as low as 127.96 last week and there is no clear sign of bottoming yet. Initial bias stays on the downside this week for 127.91 first. Break there will target 126.58 medium term fibonacci level next. On the upside, break of 129.97 minor resistance is needed to indicate short term bottoming. Otherwise, further fall will remain in favor in case of recovery. 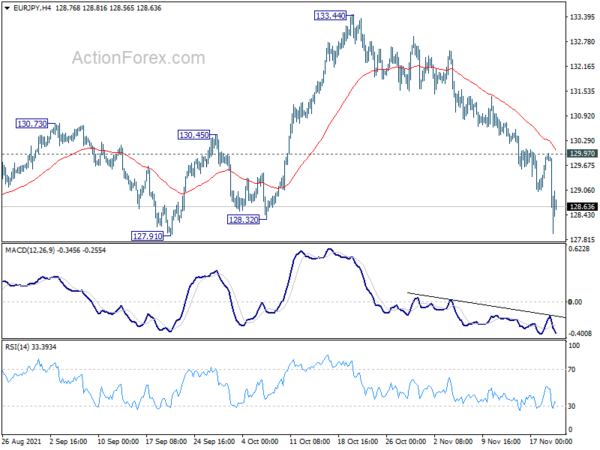 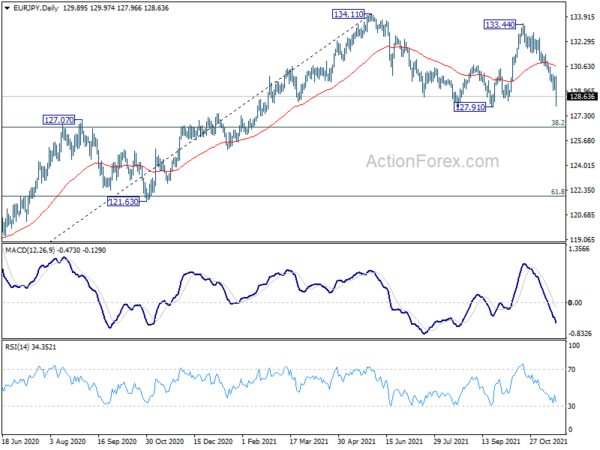 In the long term picture, EUR/JPY is staying in long term sideway pattern, established since 2000. Long term outlook will remain neutral until breakout from the range of 109.03/137.49. 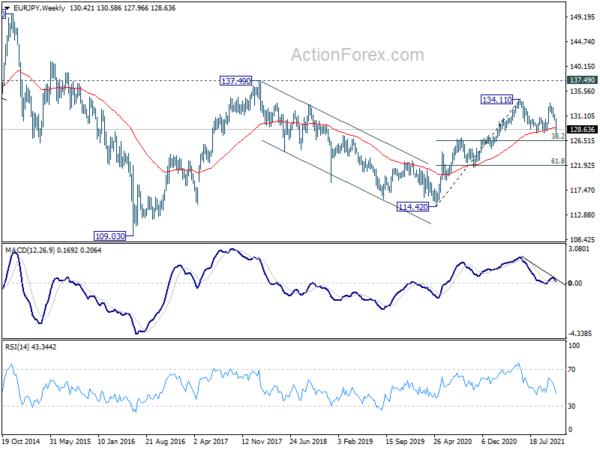 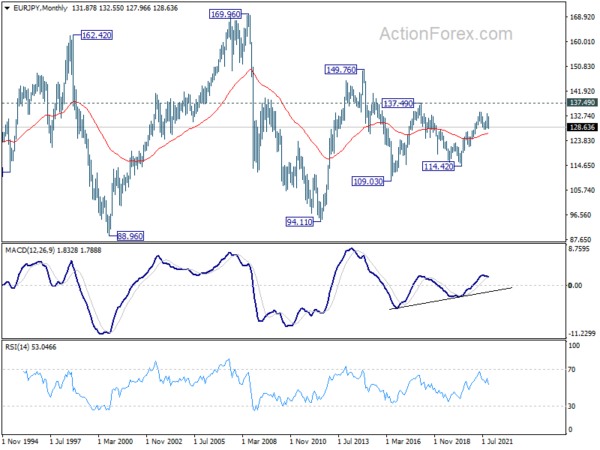