Time for a correction?

The pound has continued to push lower in recent days but continues to lack momentum, which could point to further weakness in the sell-off.

The most recent low came on reduced momentum again which suggests a corrective move may not be far away. It’s worth noting that divergences between price and oscillators aren’t reversal indicators on their own, rather a warning sign that a reversal may be coming as the move is losing pace.

So while the pair is still trending lower, the fact that it’s not generating fresh momentum continues to point to weakness in the sell-off. 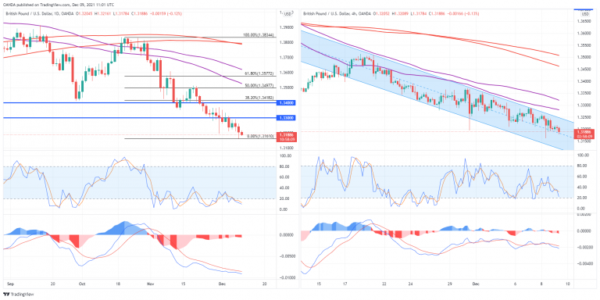 What it does do is slightly alter the key levels above. The first test for the pair is now the top of the descending channel around 1.3250, a break of which could be an early signal that a correction is underway.

Of course, it’s worth noting that until the price breaks higher, we could see further lows. The key is whether it generates fresh momentum or not. If so, further declines could follow and gather more momentum. If not, the sell-off continues to look weak and prone to quick rebounds.