The Weekly Bottom Line: All About Inflation

U.S. – All About Inflation

It’s inflation week! Anticipation of today’s CPI report created some anxiety in financial markets but ultimately left them back to where they started on Monday. Equity markets appear to have shrugged off Omicron concerns and remains driven by still-solid expectations for earnings. The bond market appears more cautious on the outlook, with long-term yields well below late November levels, even as Fed communication turns more hawkish.

Consumer prices continued to accelerate in November. On a year-on-year basis (y/y), headline CPI was up 6.8% with gasoline prices growing by 58% relative to last year and adding 2.3 percentage points to the headline reading (Chart 1). Food prices remained the second biggest contributor to growth, rising at 6.1% y/y. 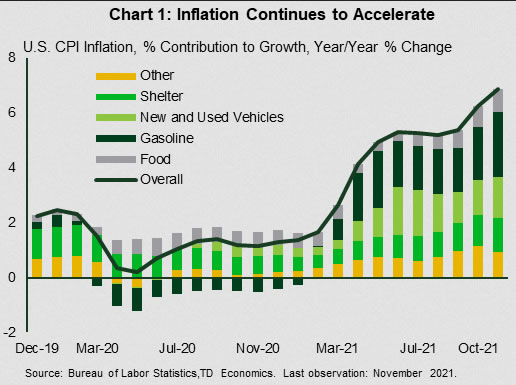 Meanwhile, strong demand for goods amidst ongoing supply shortages, continued to drive core prices (ex. food and energy), which picked up to 4.9% y/y. A key source of core price pressures was new and used vehicle prices, which expanded by 11.1% and 31.4% y/y, respectively. In terms of service prices, the shelter cost component continued to accelerate, rising by 3.8% y/y (up from 3.5%). Market-based home prices of the largest metros suggest that there’s more upside for shelter costs ahead, which could lead to more persistent elevated inflation in 2022.

On the labor side of the Fed’s mandate, this week’s jobs data signaled more tightness, with weekly jobless claims dropping to 184,000 – the lowest level since September 1969. Meanwhile, the Job Opening and Labor Turnover Survey (JOLTS) reported 11 million available jobs in October. This number is close to its record high in July and higher than the 6.9 million of workers who were unemployed that month. In fact, the ratio of the unemployed to job openings dropped to an historical low in the month. Adding marginally attached workers back to the labor force, the ratio of unemployed to job openings is slightly higher, but still in line with the average observed in 2019 when the labor market was the healthiest it had been in fifty years.

Another reason for labor market tightness is an elevated number of people who are quitting jobs. This fell in October to 4.2 million (from 4.4 million in September), but remains well above pre-pandemic norms. The number of quitters was particularly high in leisure & hospitality and retail trade sectors, which collectively accounted for 40% of quits in October. Notably, these sectors are among the lowest paying and experienced the highest growth in real compensation over the period of the pandemic (Chart 2). Considering that workers in these sectors are in close contact with consumers and face the highest health risk, further increases may well be in store in the coming quarters. 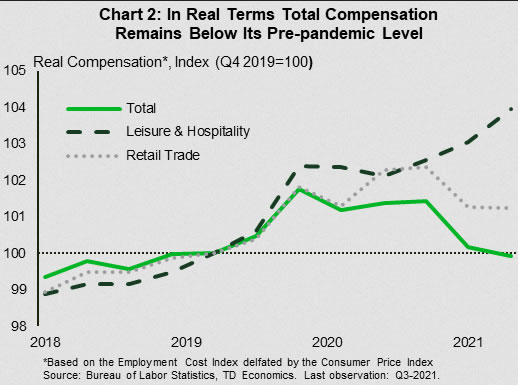 Indeed, inflation is currently rising much faster than wage growth. The story is worse if you consider that total hours are still most depressed at the low end of the wage spectrum, inflating the aggregate reading. The risk of workers demanding higher wages to compensate for the increase in prices (thereby entrenching higher inflation) is becoming a risk the Federal Reserve can no longer ignore and is likely to lead to a faster pace of asset purchase tapering and the start of rate hikes by the second quarter of 2022.

All eyes were on the Bank of Canada this week as it made its last policy announcement of 2021. With a blowout November jobs report last week, anticipation was high that the Bank might hint at an earlier withdrawal of monetary support. In the event, the Bank kept its cards close to its chest. Its statement noted the solid momentum in economic indicators into the final quarter of the year and highlighted the strength in the labour market (Chart 1). It balanced these positive developments against the negative impact of floods in British Columbia and the uncertainty caused by the Omicron variant. 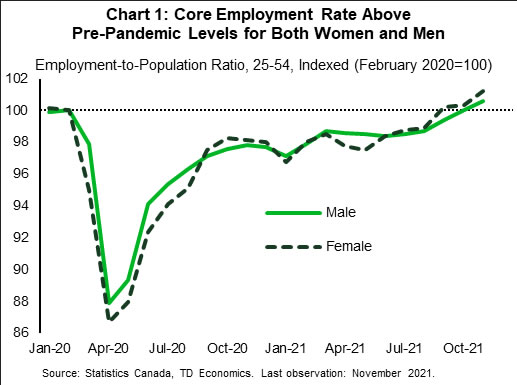 Most important, the Bank left the core of its policy announcement, its ‘forward guidance’ for the path of future policy unchanged, restating its commitment to “holding the policy rate at the effective lower bound until economic slack is absorbed…sometime in the middle quarters of 2022.” Prior to the announcement, financial markets and analysts had brought forward expectations for a hike to as early as January. The bank’s statement poured cold water on that notion.

Deputy Governor Toni Gravelle followed up the Bank’s statement with a speech on Thursday afternoon. He opened the door at least a crack to the possibility of an earlier rate hike by noting that the Bank will reassess the risks to its inflation outlook in January, “when we update our projection for the economy and inflation.” The Bank has, in the past, used its Monetary Policy Report (MPR) to adjust the timing of its forward guidance and could do so again. Since it began adding a date to when it expected slack to be absorbed – back in October 2020 – it has shifted it forward twice. From an original expectation of “sometime in 2023,” in April 2021, it upgraded its economic forecasts and moved to the “second half of 2022.” Then in October of this year, citing supply chain challenges, it downgraded its estimates of economic potential and pushed its expected date to the “middle quarters of 2022.”

The Bank is running out of runway to move it any further. Economic growth in the fourth quarter could beat expectations on the upside, but the data will not be known until after the Bank’s January MPR. It could upgrade its forecast such that the output gap closes in 2022Q1 but even then, assuming January is off the table, that leaves only March to hike rates as this is the next scheduled announcement date of the quarter. It may be easier to wait the extra month and lift off with the release of the April MPR.

In any case, with a healthy labour market and economic momentum heading into the New Year, the case for the Bank of Canada to move off the zero lower bound is solid (Chart 2). As long as Omicron does not throw the economy off course – and the risk cannot be discounted – a rate hike in April seems the most likely outcome. From there, one more before the second quarter is out looks increasingly likely, allowing for a total of four 25 basis point increases in the overnight rate before the end of 2022. 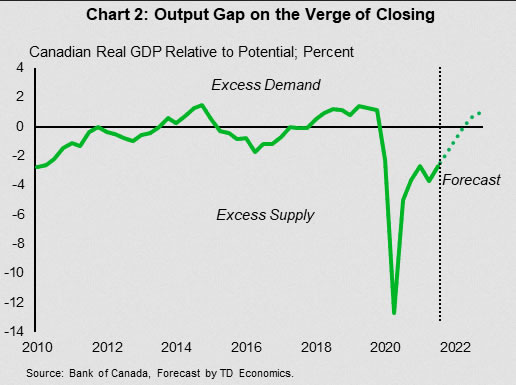