EUR/USD – Consolidation ahead of Fed and ECB

Which will break first?

It would seem EURUSD is in consolidation ahead of the Fed and ECB events this week.

It appeared to be flirting with a breakout higher but it wasn’t long until bulls abandoned ship, ahead of the recent highs in fact, in a sign that they had little confidence of achieving a substantial breakout ahead of the rate decisions.

Given the amount of uncertainty around both, not to mention omicron, it’s perhaps not too surprising that we aren’t seeing a more significant breakout at this stage.

The Fed could accelerate its tapering but in the absence of concrete data on the new variant, it may be hesitant to offer too much on interest rate guidance. Of course, the dot plot means we will get a much better grasp and I expect forecasts will be much more hawkish, but we could see a strong sprinkling of dovish caveats.

The ECB is in a similar, albeit less pressured, situation. They don’t quite seem prepared to retire transitory yet but there’s one big question on everyone’s lips. What will replace PEPP in March? Can it be extended now that there’s a new variant running wild?

With so many questions to be answered, we could be in for a couple more days of consolidation, after which, a breakout may follow. 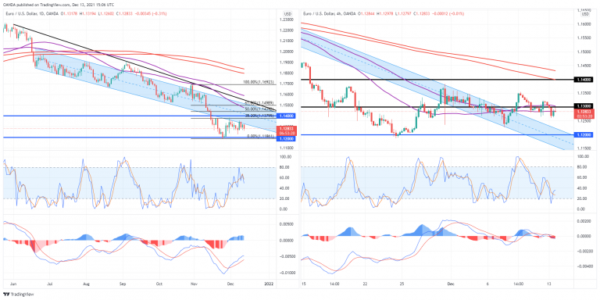 The notable levels above and below remain largely the same, with 1.12 below the major support level and 1.14 above key resistance. There may be a giveaway prior to this, with a break of the recent highs (1.1320) or lows (1.1260) perhaps signalling a shift, but a break of the earlier levels will be more significant.