The European Central Bank (ECB) will have to decide by how much to slash its asset purchases when it concludes its meeting at 12:45 GMT Thursday. It will probably be another battle between hawks and doves, with the most likely compromise being to cut quantitative easing in about half. As for the euro, the bigger picture remains gloomy.

The ECB has a difficult balancing act to pull off this week. Inflation has accelerated dramatically, mostly thanks to surging energy prices and the storm in supply chains, making the most hawkish members of the Governing Council nervous that it could stick around.

Yet, the outlook for growth remains daunting with covid restrictions making a comeback in several countries and the labor market still far away from a full recovery. This implies wage growth is likely to remain muted for a while longer, so ‘organic’ inflationary pressures are not so powerful. 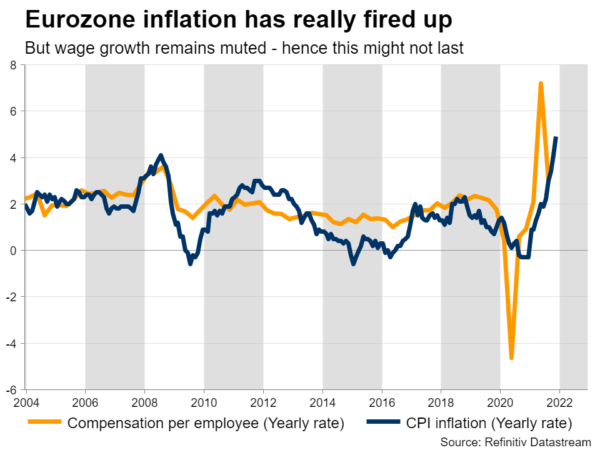 Against this backdrop, the ECB will have to decide whether and by how much to reduce its asset purchases. Admittedly, it’s a tough spot. Do nothing and you risk pouring more fuel on the inflationary bonfire. Cut back too much and you might shock the bond market, risking a minor replay of the debt crisis.

As such, the most likely conclusion is a compromise whereby the ECB ends the emergency asset purchase program completely but expands its regular program to make up for some of the shortfall. Overall, the pace of QE purchases could be slashed in about half, from EUR 80 billion per month currently to roughly 40 billion after March. 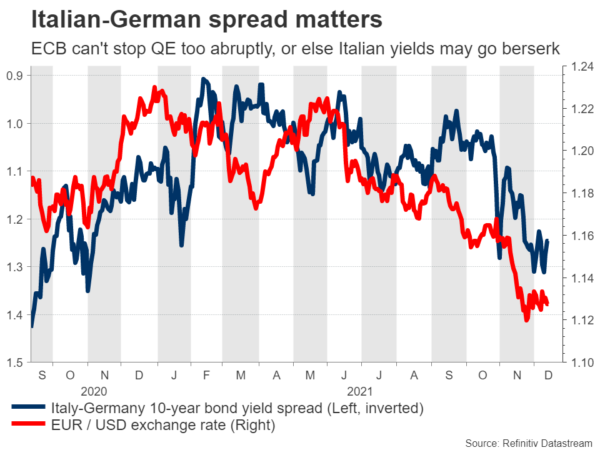 That would likely appease the hawks that are terrified of persistent inflation, as well as the doves that are worried a sudden withdrawal might spark havoc in the bond market. This is particularly a risk for economies like Italy that have high debt levels, so any spike in bond yields could hamstring the entire recovery.

As for the euro, the initial reaction will depend on how deeply asset purchases are slashed, how much higher the new inflation forecasts are revised, and any signals around future rate increases. Everything essentially revolves around whether the ECB is still relaxed or is growing concerned about inflation.

Ultimately, even if the market decides the central bank was on the hawkish side of expectations and the euro spikes higher, there isn’t much to like about the currency in the bigger picture. The European recovery is still anemic and in contrast to the Fed, the ECB will continue with asset purchases and is not even considering rate increases. 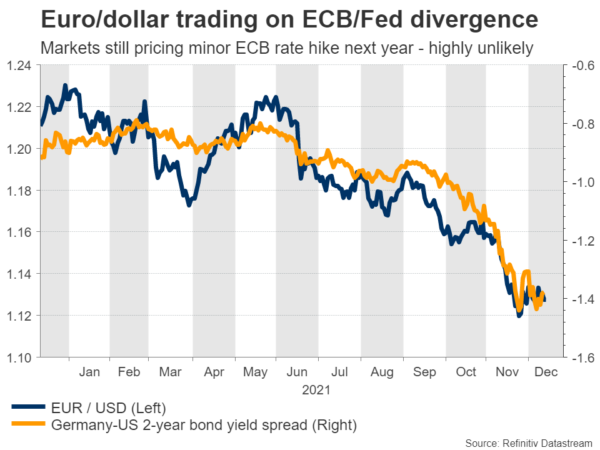 Markets are still pricing in a decent probability for a small rate hike next year, so there is scope for more losses in the euro as the ECB pushes back against this. Political risks are also on the radar, with a contentious election in France next year and the possibility that far-right forces take control in Italy if snap elections are called.

Global risk sentiment is another variable. The euro tends to underperform during periods of market stress, and with global central banks tightening while asset valuations are so ‘pricey’, this is something to watch closely.

Taking a technical look at euro/dollar, if the bears retake the reins and manage to pierce below the recent low of 1.1185, the next target could be the March 2020 peak of 1.1140.

On the upside, the bulls could encounter their first test at 1.1360, a violation of which could open the door for a congested area that encompasses the 50-day moving average, the downtrend line drawn from the May peak, and the 1.1520 region.

Finally, the latest PMI business surveys for December will also be released ahead of the ECB decision, at 08:00 GMT on Thursday.