WTI oil futures (February delivery) paused their two-day advance near December’s resistance zone of 73.10. Although some consolidation is likely around that ceiling, the bulls could soon recharge their batteries according to the momentum indicators.

The RSI has breached its previous highs, stretching its uptrend slightly above the 50 neutral mark. The MACD continues to gain ground above its red signal line, while the rising Stochastics have yet to reach their 80 overbought level, all reflecting improving sentiment in the market.

Should the 73.10 bar give way, with the price closing clearly above the 50% Fibonacci of the 61.27 – 85.39 upleg too, the bullish action could pick up steam towards the 38.2% Fibonacci of 76.37. A tentative descending trendline drawn from the seven-year high of 85.39 could add some downside pressures around the same region. However, if it fails to act, the way will clear towards the 23.6% Fibonacci of 79.82.

On the downside, the 61.8% Fibonacci of 69.28 will be on guard for any bearish corrections along with the short-term tentative ascending trendline. A violation at this point could trigger a steeper decline towards the three-month low of 62.25 unless the 66.25 support area manages to calm selling pressures earlier.

Meanwhile in the medium-term picture, the neutral status remains intact as long as the price trades between 61.77 and 85.39.

In brief, despite today’ stabilization, WTI oil futures probably have more bullish fuel in their tank, with the confirmation likely coming above 73.10. 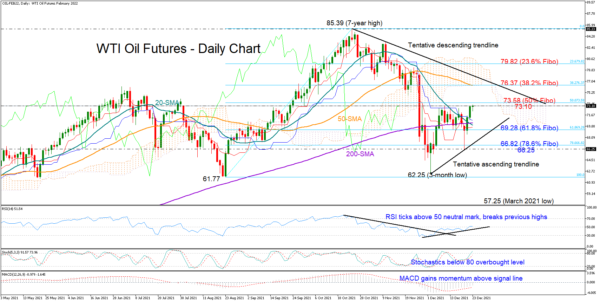