EURJPY is struggling to extend its latest rally, which began around 127.50, beyond the December 16 high of 129.63. The converging simple moving averages (SMAs) are hinting that a more neutral price development may evolve confined now between a lower limit of 127.30-127.50 and an upper limit of 129.53.

The horizontal blue Kijun-sen line and the stalling in the ascent of the red Tenkan-sen line are together signalling feeble upside pressures, while the short-term oscillators are reflecting that buyers are losing command. The MACD, in the positive region, is fading above its red trigger line, while the RSI is dipping in bullish territory. The stochastic oscillator has turned bearish promoting the surge in negative price action.

If selling interest increases, an initial zone from the 129.08 low until the 200-period SMA at 128.93 could prevent the negative trajectory from gaining pace. However, if the price moves lower, a reinforced support area from 128.57 until the 100-period SMA at 128.32 may draw traders’ attention. If sellers manage to steer the pair below this obstacle too, the 128.00 handle could come into focus before sellers target the 127.30-127.50 support boundary.

Alternatively, if bullish forces return, the intraday high of 129.53 could delay the test of the 129.63 high, acting as the fresh ceiling of a near four-week trading range. Conquering this key barrier, the bulls may then challenge the 129.97-130.22 resistance border before eyeing the November 15 high of 130.60.

Summarizing, EURJPY’s bullish tone is diminishing and a price pullback beneath the 200-perod SMA would confirm this. Furthermore, a move like this would endorse an extension of the current trading range. 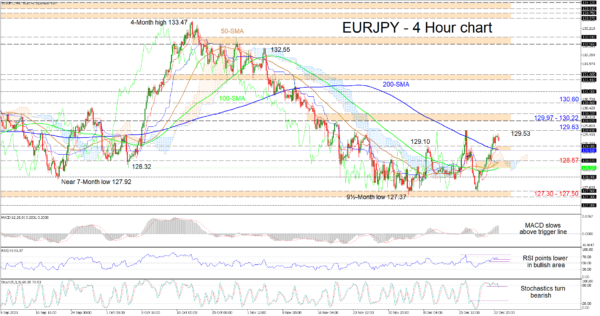