USDCAD has retreated from its December high amid strengthening negative momentum, and is currently found near its lower Bollinger Band indicating that an immediate upward movement should not be ruled out. However, despite the negativity in the short-term, the price is trading way above its 200-period SMA, reinforcing the pair’s long-term bullish outlook.

Short-term momentum indicators are reflecting a negative bias as the RSI is located below its 50 neutral mark, while the MACD is found below zero and its red signal line.

Should the bulls regain control, initial resistance might be found at the 1.2836 level before moving towards the region that includes the 50-period SMA and the 1.2847 obstacle. A break above the latter could revive the pair’s positive momentum, opening the door towards the 1.2936 point, before buyers shift their attention towards the 1.2963 barrier.

On the flip side, if the price crosses below the 1.2785 level, support might then be found at the 1.2763 obstacle. A break below that level could pave the way towards the 1.2743 barrier before sellers turn to the 200-period SMA currently at 1.2733. A decisive move below the latter could turn the fortunes around for the pair, opening the door towards the 1.2713 level.

In brief, despite the bearish short-term outlook, the long term picture remains positive. For sentiment to change, sellers would need to break below the 200-period SMA. 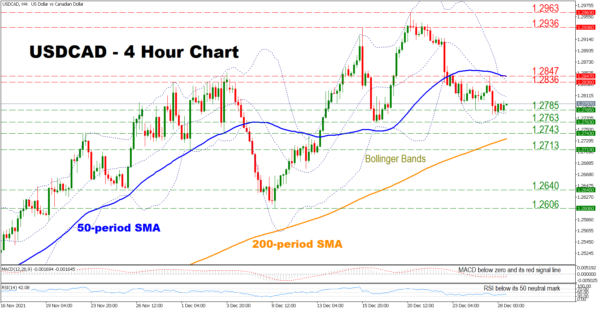