Markets have been dead quiet during the holiday period but the upcoming week is guaranteed to bring increased volatility. The nonfarm payrolls report along with the FOMC minutes and a host of other US data are bound to wake markets up, while employment and inflation numbers out of Canada and the Eurozone, respectively, should also liven things a little. Although several major pairs have been rebounding against the US dollar and Wall Street has been notching up one record high after another, the incremental moves have been modest. That could all change in the next few days.

NFP and FOMC minutes could roil the dollar

It’s going to be a gradual return to business as usual in most countries except in the United States where it’s set to be a full-on week. The ISM manufacturing PMI is the first top-tier data to greet 2022 on Tuesday. The closely watched manufacturing activity gauge is expected to point to an easing in the PMI from 61.1 to 60.2 in December. If the decline is led by a fall in the priced paid component, that may not be such a bad thing. On the other hand, weaker new orders and a still elevated priced paid index could worry investors.

The JOLTS job openings for November on Tuesday and the ADP private payrolls print due Wednesday will keep traders guessing about the labour market ahead of the all-important jobs report on Friday. Factory orders and the ISM non-manufacturing PMI out on Thursday will be the other key data to be watched prior to Friday.

But of course, all eyes will on the NFP figures, especially after November’s surprise miss and the swelling of Covid-19 cases in recent weeks. Analysts are forecasting an increase of 400k jobs in December and for the unemployment rate do tick lower to 4.1%. Average hourly earnings are expected to have eased from 4.8% to 4.1% year-on-year. 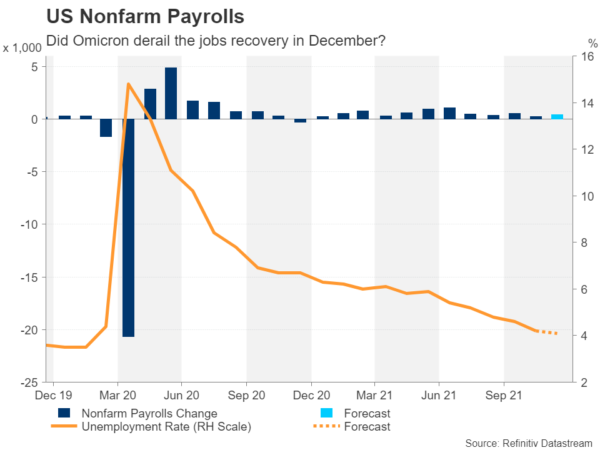 How markets respond to the jobs numbers will probably depend on what tone the FOMC minutes set. The Fed will publish its December meeting minutes on Wednesday and although it’s unlikely to reveal much more than what Chair Powell briefed reporters after the meeting, there could be some clues in the timing of the first rate hike.

The dollar index has been ranging sideways since late November so any shocks from either the minutes or the NFP data could easily trigger a breakout.

One of the currencies that has barely made any inroads during the greenback’s latest bout of softness is the Canadian dollar. The loonie’s underperformance comes even as oil prices have posted a solid rebound from the early December lows. 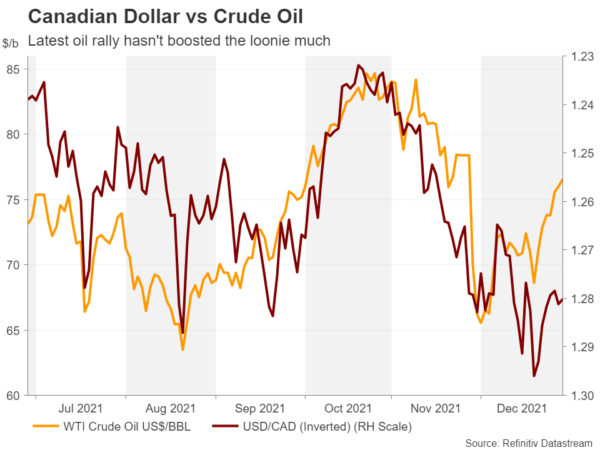 OPEC and its allies meet on Tuesday for their monthly output setting decision. The alliance will probably stick to its existing plan of adding 400,000 bpd each month. Although Omicron has cast a shadow over the demand outlook heading into 2022, the disruptions to air travel from surging virus cases is expected to be temporary and many countries are still facing an energy crunch.

The loonie could gain if OPEC+ sound upbeat about the demand picture but also important will be Friday’s employment figures for Canada. The Canadian economy added an impressive 153.7k jobs in November but December could have been a more difficult month for the labour market as Omicron swept the country.

In other releases, the Ivey PMI is also due on Friday.

It’s going to be extremely quiet for the other commodity-linked currencies as there’s no major data out of Australia and New Zealand. But with investors somewhat undecided about how much of an impact Omicron will have on the global economy, any headlines about fresh restrictions could hurt the riskier currencies, including the pound. 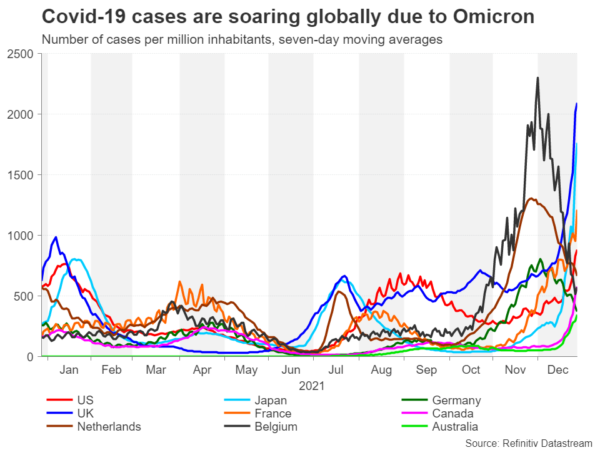 China worries have also been hanging over the markets and the December Caixin manufacturing PMI on Tuesday will likely be monitored for any signs of easing in the economic slowdown.

Meanwhile, over in the UK, investors shouldn’t get overcomplacent about no new virus curbs for England, as Boris Johnson could yet surprise by announcing tighter rules soon after the New Year amid rising hospital admissions from Covid.

The pound would be at risk of suffering a major blow from any such announcement.

The broad relief about Omicron having reduced severity has been negative for the safe-haven Japanese yen. Should risk sentiment sour from escalating infections and possibly tighter restrictions, the yen could enjoy a bit of a revival. In the meantime, Japanese data on household spending, wage growth and inflation in the Tokyo region on Friday will struggle to attract much attention.

Finally, in the euro area, flash CPI for December will be the highlight amid some doubts lately about the European Central Bank’s relaxed stance on soaring inflation. ECB policymakers have been hinting that QE could end in 2022 and rates could start to rise in 2023, though, investors haven’t been buying into this optimism and the euro remains stuck near its 2021 lows.

Eurozone inflation jumped to 4.9% y/y in November and is forecast to have moderated to 4.7% in December. This could take the pressure off the ECB if in the short term. But inflation isn’t the ECB’s only problem as the Eurozone growth outlook has taken a hit from the Omicron wave that’s led to several European governments to impose tougher virus measures. 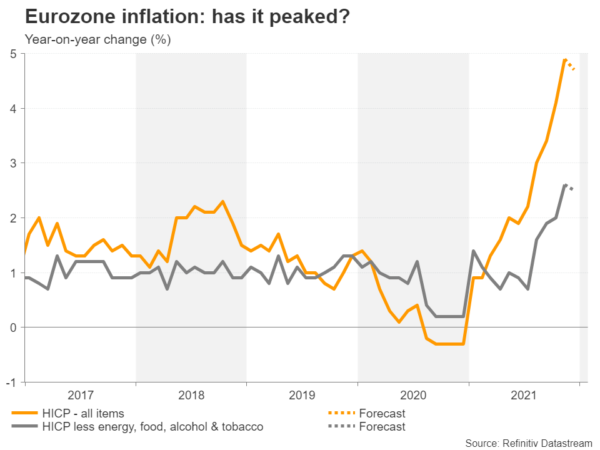 Most don’t think the ECB will be in a position to hike rates anytime soon, hence, why the euro hasn’t been able to make much progress against the dollar.

But there will be plenty of other releases next week to shed some light on the Eurozone economy, including the final manufacturing PMI on Monday, followed by the final services print on Wednesday. German industrial orders are out on Thursday, with the production figures coming up on Friday. Also rounding things up on Friday will be the economic sentiment indicator and retail sales for the bloc.