The flash inflation estimates for December will hit the market on Friday at 10:00 GMT. The headline rate is anticipated to edge lower, but remain extremely elevated. Upcoming data are not expected to offer the much needed positive relief for the euro, which had its worst year against the US dollar since 2015, as the European Central Bank (ECB) is unlikely to speed up its normalization plans.

Inflationary pressures in the Eurozone have been spiraling, reaching in November their highest growth rate since 1991. This was mainly driven by supply bottlenecks and soaring energy prices, forcing businesses to pass the increasing costs to consumers. However, despite inflation being well above the symmetric target of 2%, the ECB looks reluctant to press hard on the tapering button.

In its December meeting, the ECB vowed to hold down borrowing costs through 2022 and set out a plan to gradually wind down its asset purchases, while leaving the door open for reversing this decision. This has reaffirmed the interest rate path divergence with the BoE and the Fed, weighing on the euro’s future outlook. 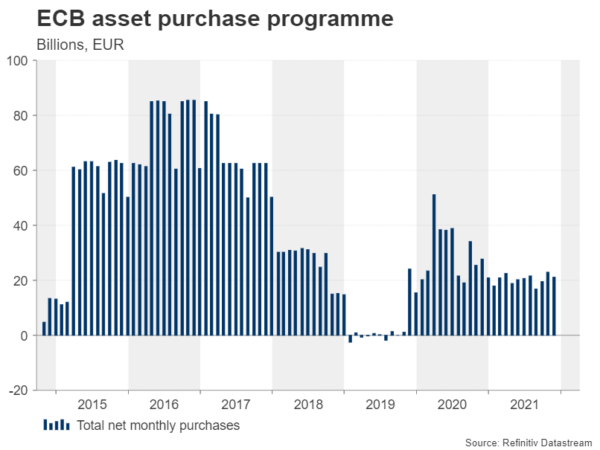 Will the ECB remain patient?

The Eurozone’s economy has hit a speed bump as the Omicron variant, lockdowns and supply bottlenecks have reignited slowdown fears. This uncertain outlook and the risk of unraveling years of effort to revive the once anemic inflation in the euro area have made the ECB reluctant to commit to a normalization plan.

The central bank forecasted inflation to ease at 3.2% in 2022 before retreating below the price mandate in the subsequent years, backing the transitory inflation story. However, given the persistent global supply headwinds and the easing of current restrictions which could drive demand, those projections could prove too modest.

Looking at the consensus estimates for Friday’s release, year-over-year inflation for December is expected to drop to 4.7% from 4.9%, while core inflation (excluding food and energy) is anticipated to remain steady at 2.6%. Therefore, inflation is expected to remain elevated despite its minor drop, which is attributed to lower energy prices. 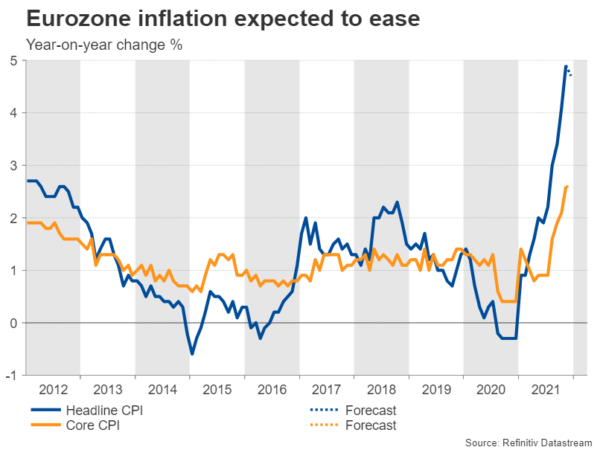 The latest PMI report showed a modest alleviation in supply pressures, which was followed by a record increase in inventory purchases. This signals an easing in input costs and output prices, which could indicate that inflation may have passed its peak. In that case, traders may price out any possibility for a rate hike by the ECB for at least the next 12 months, pressuring the euro further.

Currently, the biggest risk for the Eurozone lies in the likelihood of further deterioration in supply chain from the rampaging Covid-19 cases. Therefore, future inflation spikes, which could force the ECB to turn significantly more hawkish, should not be ruled out.

Euro/dollar is currently consolidating at around 1.13, with not much potential for a significant upside in the coming months. Should the upcoming CPI figures disappoint, the pair could move towards its 1.118 support.

However, an unexpected pickup in the CPI reading, accompanied by hawkish comments from ECB policymakers, could provide the much needed appreciation for the euro. This could send the pair to test the nearest resistance region, which includes the 50-day simple moving average (SMA) and the 1.138 hurdle.