GBPJPY Bulls Hang in there Despite Minor Pullback to 157

The short-term oscillators are transmitting conflicting messages in directional momentum. The MACD, in the positive region, continues to strengthen above its red trigger line, while the RSI is flirting with the 70 overbought level. On the other hand, the stochastic oscillators’ bearish charge seems to be growing, which is promoting the pair’s recent negative impetus.

If sellers stay in control, downside friction could commence around the 156.00 handle ahead of the 154.29-155.38 support section. If the bears manage to drive the price beneath this key barrier, a deeper retracement could unfold with the price aiming for the fortified zone of support between the mid-Bollinger band at 153.33 and the 152.62 inside swing high.

Then again, if buying interest picks up, initial tough resistance could emanate from the 161.8% Fibo extension of 157.84 until the upper Bollinger band at 158.54, an area that also encompasses the more than 5-year high of 158.20. Successfully conquering this, the pair could propel for the critical 160.09 June peak of 2016, where the pair had previously collapsed, ahead of the 176.4% Fibo extension of 160.88.

Summarizing, GBPJPY’s neutral-to-bullish tone remains intact above the SMAs and the 148.96 trough. A jump above 158.20 could bolster bullish action, while a dip beneath the 154.29-155.38 support border could start to strengthen downside pressures. 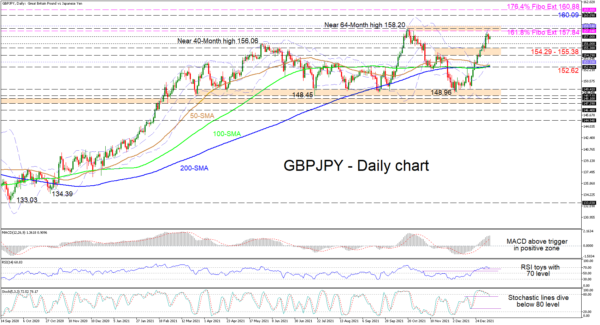