Week Ahead – US Inflation Report to Decide Dollar’s Fate

The new year has kicked off with a sharp spike in yields, which has turbocharged the US dollar but demolished the Japanese yen. Whether this trend persists will depend on next week’s US inflation report, as that could decide whether the Fed will begin its rate hike cycle in March already.

The US economy is in pretty good shape. The labor market will likely return to full employment this year, consumption is booming, the Atlanta Fed GDPNow model points to growth of 6.7% in the last quarter, and of course inflation is scorching hot.

As such, markets have started to entertain the idea that the Fed could raise interest rates as soon as March to combat inflation, currently pricing in an 85% probability for such an action. This has been a blessing for the dollar but a curse for the yen, as the Bank of Japan is not expected to follow suit anytime soon.

In this light, the upcoming CPI inflation data on Wednesday and retail sales report on Friday could be crucial. Forecasts suggest the yearly CPI rate held steady at 6.8% in December but the core number that excludes energy and food prices is expected to have jumped to 5.4% from 4.9% previously.

The latest PMI surveys from Markit support these projections. Selling prices by companies ‘rose steeply’, but at the slowest pace for three months, which is exactly in line with what the monthly CPI print is expected to show. 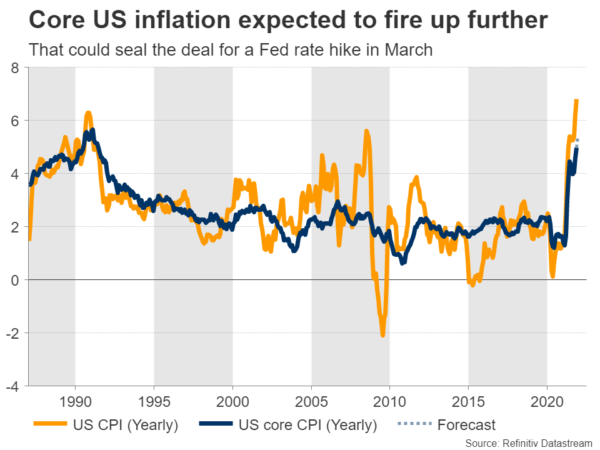 As for the dollar, a sharp spike in the core CPI rate coupled with a solid retail sales report may be just enough to cement expectations that the Fed will get the ball rolling in March. That could keep the reserve currency supported over the next few months.

Looking further out, however, the biggest risk for the dollar are any signs of ‘peak inflation’. A combination of stabilizing energy prices, supply chains coming back online, fading fiscal spending, and tougher year-over-year comparisons from April onwards seems like a recipe for inflation to peak later this year. 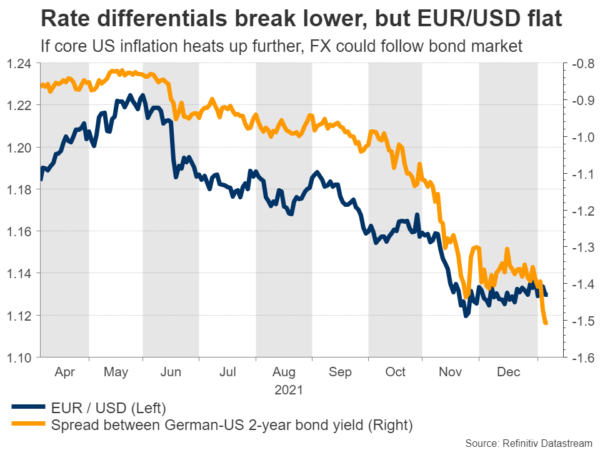 At that point, traders could dial back bets for powerful Fed tightening and US yields might correct lower, especially if the Republicans take control of Congress in the midterms, blocking new spending. Strap in, the dollar could trade like a rollercoaster this year.

Finally, note that Fed chief Powell will appear before Congress both on Tuesday and Thursday, for the hearings to confirm his second term.

The other big winner from the latest spike in yields has been the British pound. Investors seem to have concluded that Omicron isn’t dangerous enough to stop the Bank of England from raising interest rates, or even slow down its plans.

Money markets currently assign a 70% chance for the BoE to raise rates again next month, for a grand total of four hikes this year. This helped push euro/sterling to a new post-pandemic low this week, along with some remarks from Prime Minister Johnson that new covid restrictions are unlikely.

Next week will bring the GDP numbers for November on Tuesday, but those are unlikely to change this rosy narrative. For now, there is still scope for sterling to extend its recent gains, at least against the euro and yen, as markets become more confident about a February rate hike. 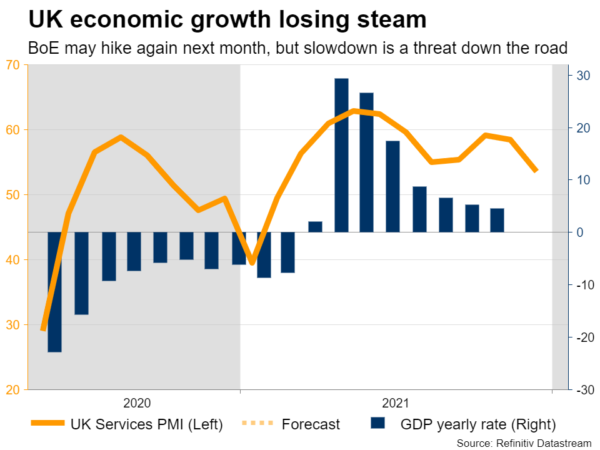 However, in the bigger picture, there are some risks. While the British jobs market is strong and inflation is elevated, the latest PMI surveys suggest economic growth is losing steam. If this trend persists, the BoE might only raise rates twice or three times this year, not four times as markets expect.

Chinese inflation also in the spotlight

Elsewhere, the most important release will be China’s own inflation report on Wednesday. Both consumer and producer prices are expected to have cooled in December, partly thanks to the fading power crisis. Trade data for the same month are due out on Friday.

The slowdown in producer prices could be especially crucial for markets, as it would suggest that China is exporting less inflation abroad, feeding the narrative that inflation globally may be approaching its peak. 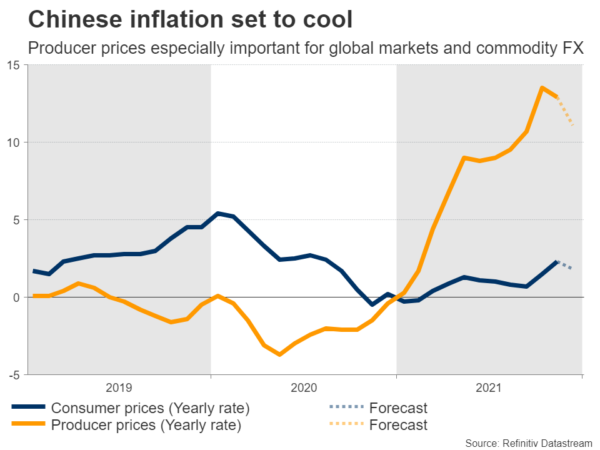 Of course, the risk to all that is China’s zero-covid policy. The government has responded with draconian lockdowns in any cities that report covid cases, which threatens to keep the global supply chain under pressure for longer, even though disruptions have been mild so far.

The worsening outlook for Chinese growth coupled with the gloomy mood in stock markets may also explain why the commodity-linked Australian and New Zealand dollars performed so badly this week.

China’s trade numbers next week could be crucial for these currencies, with the aussie also paying attention to Australia’s final retail sales numbers for November that are due on Tuesday.