The economic calendar was jammed packed to start the new year. First up, a rapid increase in COVID-19 cases is quickly dwarfing all previous waves (Chart 1). Fortunately, hospitalization rates are not rising as swiftly, but are still ticking up at the same time that healthcare capacity is constrained by staffing shortages. The surge in cases has prompted airlines to cancel flights and companies to cut services and reduce hours as infected workers self-isolate (though for fewer days than past waves). With worker shortages already a pressing issue, the current wave is likely to weigh on near-term business performance and slow the recovery in high-contact services. 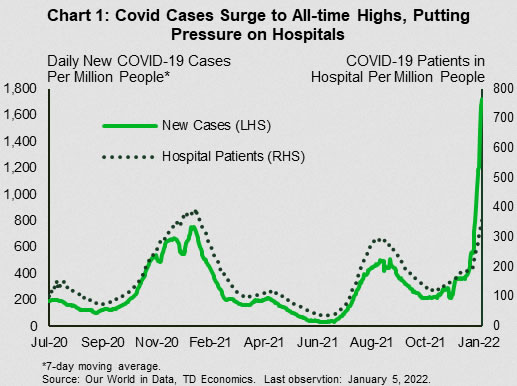 Adding to business challenges, workers are quitting their jobs at record rates, while job openings remain near all-time highs. Employers continue to add jobs, but job growth in December came in notably shy of the 450k anticipated by the market, at 199k. The disappointment was softened somewhat by a net 141k upward revision to the two previous months. The unemployment rate also fell from 4.1% to 3.9%, narrowing in on its pre-pandemic level of 3.5%. With high demand for workers and increasingly limited supply, it is little surprise that wage growth remains hot. Average hourly wages were up 4.7% from year ago levels in December, slowing slightly from 5.1% in November.

Such strength in the labor market, combined with more persistent inflationary pressures has added urgency to the Federal Reserve’s task of curtailing pandemic-induced support measures. Minutes from the most recent FOMC meeting showed that more members are inclined to accelerate the pace of policy normalization. This culminated in the Fed’s decision to speed up the taper of their Quantitative Easing program and possibly faster rate increases.

On the production side, there was some good news on easing supply constraints. The ISM manufacturing index slipped to 58.7 in December from 61.1 in November. Despite the slip, manufacturing activity is still expanding at a healthy clip. More encouragingly, there were hints that supply-chain problems could be easing as the supplier delivery sub-index fell to 64.9 in December from 72.2 the previous month (Chart 2). The decline suggests that delivery times are improving, which is a relief given the severe bottlenecks that manufacturers have been facing. 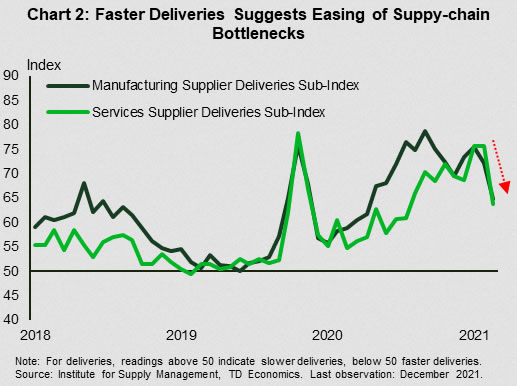 There was also a pullback in the ISM services index to 62 from 69.1 in November. The outturn however was not unexpected, given that the previous reading hit a record. The service sector also saw improvement in supplier delivery times as the index fell by 11.8 percentage points to 63.9 – the lowest reading in the past eight months.

Further good news saw vehicle production levels in December improve from their September lows – inching back closer to the 1.1M recorded in November. While still well below the pre-pandemic level, the improvement points to further easing in supply constraints in this key economic sector. Unfortunately, all of this data is for a time before the latest pandemic wave, and we could very well see a reversal in the months ahead. Still, with evidence this wave is progressing even faster than past waves, its peak should also not be too far in the future, allowing with any luck for the continued return to economic normalcy.

Canada – Starting the Year on a Sombre Note

The Canadian economy ended 2020 on a strong note. This week’s data flow corroborated the narrative that growth in the fourth quarter was notably sturdy. But, headwinds are imminent. The Omicron wave and recently announced restrictions across some provinces mean that Canada’s economy will likely experience a soft patch in the first quarter of 2022.

This week’s attention was centered on December’s Labour Force Survey release, which once again, surprised to the upside. The economy added a robust 55K jobs in December. The details were similarly solid. Full-time employment rose by a whopping 123K, the unemployment rate edged down to 5.9%, and core age participation held sturdy at a record-high 88.3%. Employment is now 1.25% above pre-pandemic levels (Chart 1). Both the goods producing (+44K) and service producing (+11K) sectors saw gains on the month. From an industry perspective, it was encouraging to see a pick-up in hiring in the previously lagging construction industry. The one fly in the ointment was wage growth, which at 2.7% year-on-year is well below the 4.6% increase in the latest consumer price index data. Importantly, the report’s reference period does not capture the expected layoffs in the service sector amid renewed restrictions. 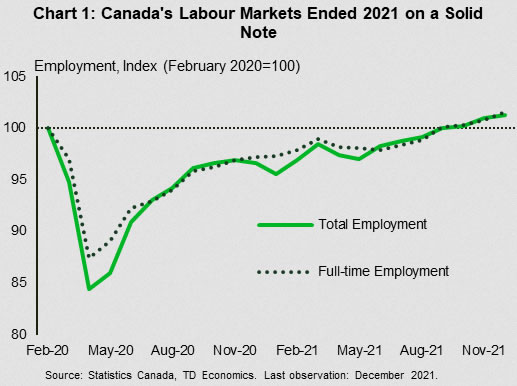 It wasn’t just labour markets that continued to surprise on the upside in Q4. Canada recorded a sixth consecutive merchandise trade surplus in November (Chart 2). At $3.1 billion, this is the largest surplus since the autumn of 2008. This materialized despite major disruptions to trade flows from the dismasying floods in B.C. during the month. Export volumes increased significantly (+3.5%), and strength was broad-based across the industries. Strong manufacturing sentiment in the U.S., sturdy global demand and high commodity prices have shored up Canada’s trade balances in recent quarters, providing a much needed tailwind to economic growth. 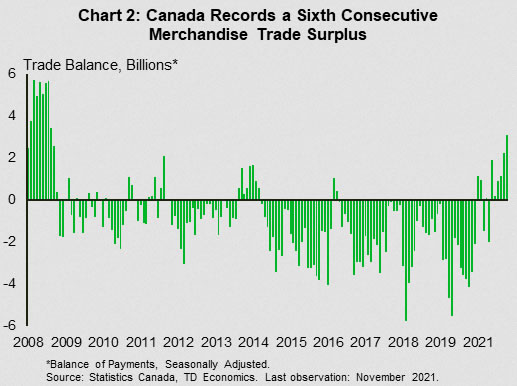 Notwithstanding the constructive trajectory in Q4, recent developments portend some softness in Q1. The Omicron wave of infections and recently announced restrictions on the service sector will weigh on employment and real GDP growth in January. Similar to previous waves, the impacts are expected to be concentrated in service sector (hospitality, entertainment, fitness) activity and employment. Beyond the direct impacts, a potential increase in absences due to infections and school closures, as well as a possible rotation in spending towards goods may exacerbate existing supply pressures. While still subject to uncertainty, our first pass suggests an impact of roughly two percentage points on annualized economic growth during the first quarter. This is predicated on an assumption that restrictions are relaxed in February and that the current wave of infection subsides. The hope is that this hiccup is temporary, and that the subsequent recovery is swift.