Strong US inflation reading and hawkish comments from Fed officials were the main theme in the markets last week. While much volatility was seen in the stock markets, major indexes remained rather resilient. Dollar got practically no support from expectation of three Fed hikes year this, and tumbled broadly. Euro finally broke out of range against the greenback, but it still ended as the second weakest.

On the other hand, Yen ended as the best performer on speculation that BoJ could finally start talking about rate hikes. Canadian Dollar was the second best, help by the extended rise in oil prices. Other commodity currencies ended mixed, puzzled by the lack of clear direction in risk sentiment. Sterling was also mixed as recent rally in crosses appeared to be losing momentum.

With US consumer inflation hitting 40-year high at 7%, Fed officials became more vocal on the need to raising interest rate. A March lift-off looks more certain than even. And, just as December’s dot plot suggests, three rate hikes this year is the baseline, but some FOMC members are clearly open to more. Another question now is when the balance-sheet run-off would start, after three to four hikes, or sooner. According to Fed funds futures, three hikes to 0.75-1.00% by the end of the year is still the main scenario. There is less than 40% chance priced in for higher rates. 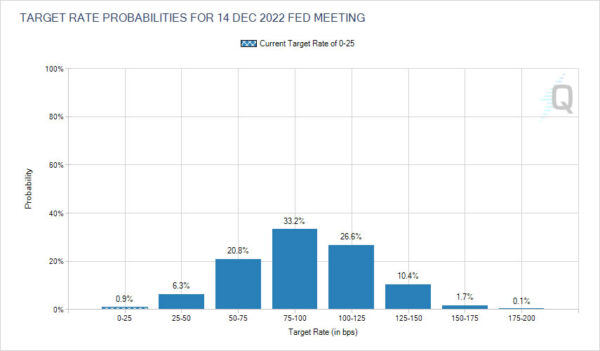 Stock investors refusing to give up, SPX holding above trend line

Much volatility was seen in US stocks last week. There were times when major indexes tumbled sharply at open, but reversed to close higher. Investors were refusing to give up. S&P 500 is still holding well to medium term trend line support. The up trend is still in favor to resume at a later stage through 4818.62 towards 5000 handle. Nevertheless, considering bearish divergence condition in daily MACD, break of 4531.10 support will suggest that SPX is already in correction to the rise from 3233.94. Deeper fall would then be seen to 38.2% retracement of 3233.94 to 4818.62 at 4213.27. 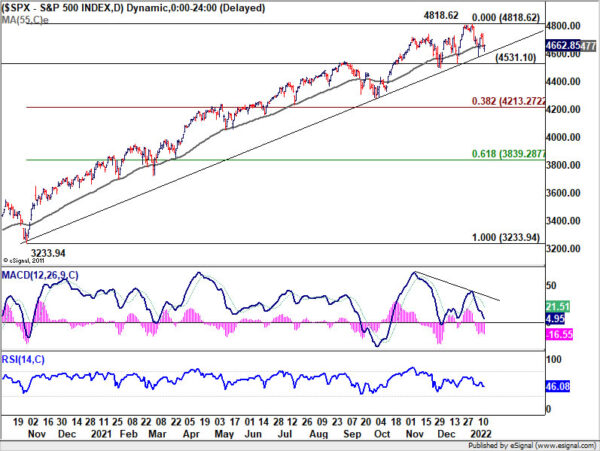 Dollar was given no support from intensifying expectation of Fed rate hikes. The greenback has indeed ended as the worst performing one for the week. That’s partly due to the catch up in global benchmark yields. Even Japan’s 10-year JGB yield is now at 0.15 while Germany 10-year yield is on the verge of turning positive.

Dollar index dropped sharply to as low as 94.62 last week before recovering to the end. Price actions from 96.93 are currently viewed as a correction to up trend fro 89.20 only. Deeper fall could be seen but there should be strong support from 38.2% retracement of 89.20 to 96.93 at 93.97 to contain downside. However, sustained break of 93.97 will argue the trend might have reversed and deeper fall could be seen to 61.8% retracement at 92.15 and possibly below. 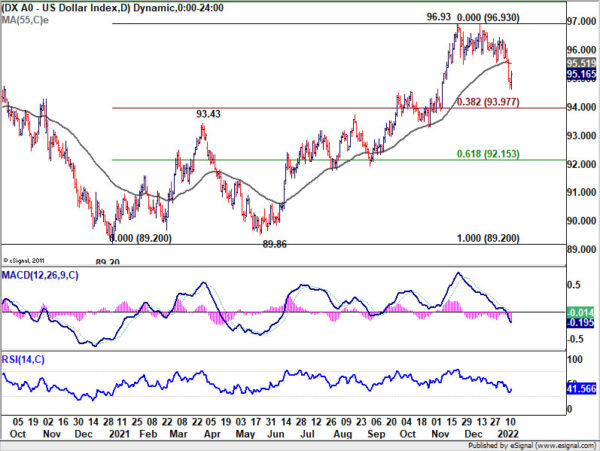 Yen’s rally was rather impressive last week considering that risk aversion couldn’t actually take shape. Based on multiple sources, Reuters reported that BoJ policymakers are already debating whether it’s time to start communicating the possibility of an eventual rate hike to the markets. While the hike itself is hardly imminent, that would involve some change in the forward guidance. Also, it’s possible that the move in rates would come even before core inflation hits the 2% target.

The considerations came at a time when the higher prices are already built into the public’s expectations. According the the December public opinion survey, 78.8% respondents said they expect price levels to go up one year from now. That’s a notable increase from September’s 68.2% and the highest level since 2019. Among them, 13.4% said prices will go up significantly, comparing to September’s 8.4%.

AUD/JPY’s recovered to 83.73 last week but was quickly knocked down. Fall from 84.27 resumed by breaking through 82.31 support. With the channel support broken, deeper fall is now in favor back to 80.25 support first. But overall, AUD/JPY could be unfolding a medium term corrective pattern in range of 77.88/86.24. Price actions could be rather mixed and unpredictable for a while. 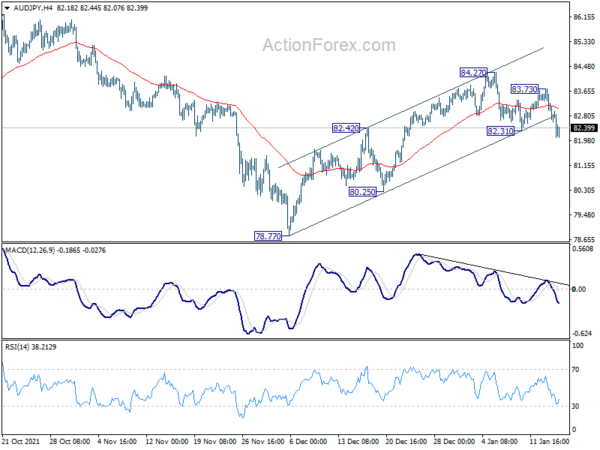 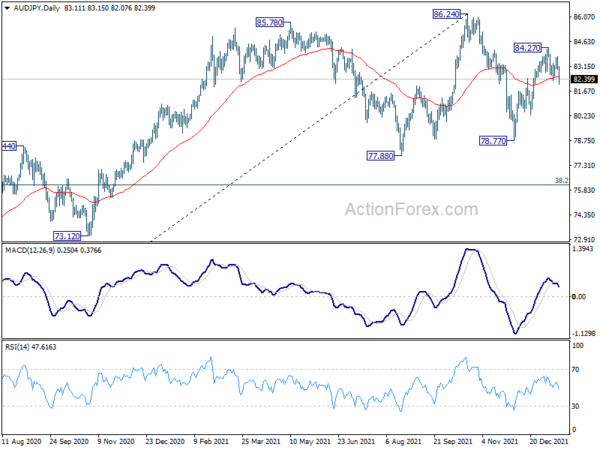 Canadian Dollar ended as the second strongest thanks to persistent rally in oil prices. WTI crude oil extended the rise from 62.90 and met target of 161.8% projection of 62.90 to 73.66 from 66.46 at 83.86. For now, such rally is still viewed as the second leg of the consolidation pattern from 85.92 only. Hence, we’re not expecting a firm break of 85.92 yet. Instead, another fall should be seen before the consolidation completes. Break of 77.97 support will indicate rejection by 85.92 and target 73.66 resistance turned support first. However, firm break of 85.92 could pave the way to 90 handle. 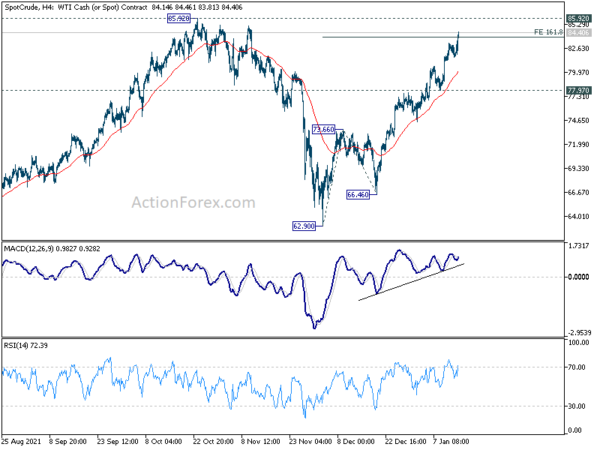 While EUR/CAD’s rebound from 1.4162 was slightly stronger than expected, it appeared that it’s complete at 1.4644 already. Deeper fall will remain in favor as long as 55 day EMA (now at 1.4426), to retest 1.4162 low. Whether EUR/CAD could break through 1.4162 low to resume larger down trend might depend on WTI’s reaction to the above mentioned 85.92 resistance. Rejection by 85.92 could help floor EUR/CAD at or above 1.4162, and bring rebound to extend the corrective pattern with another rising leg. 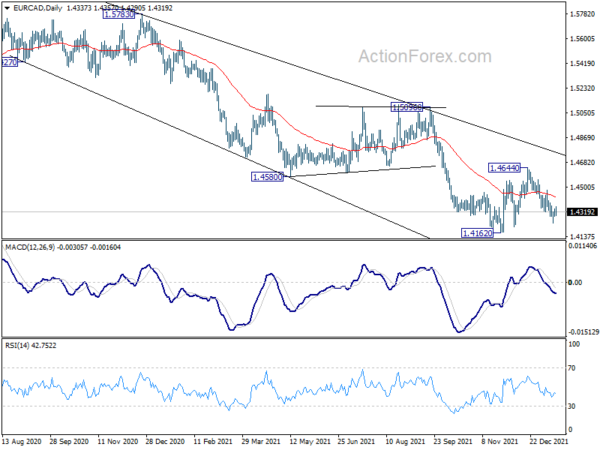 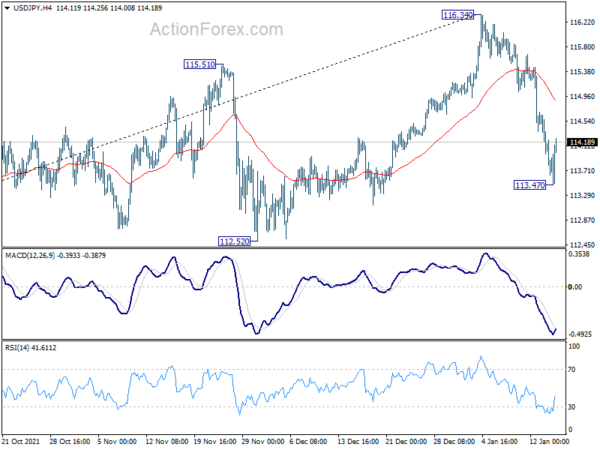 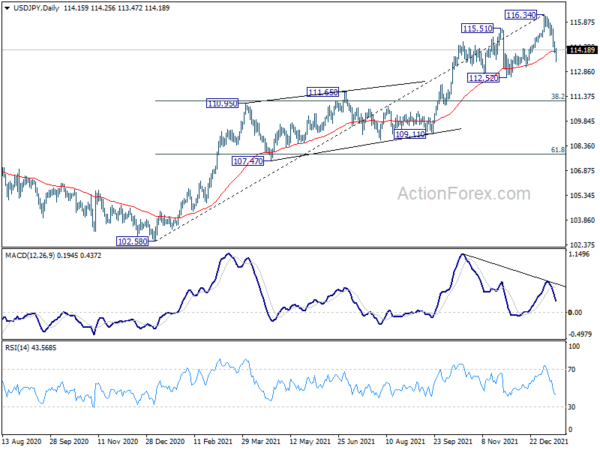 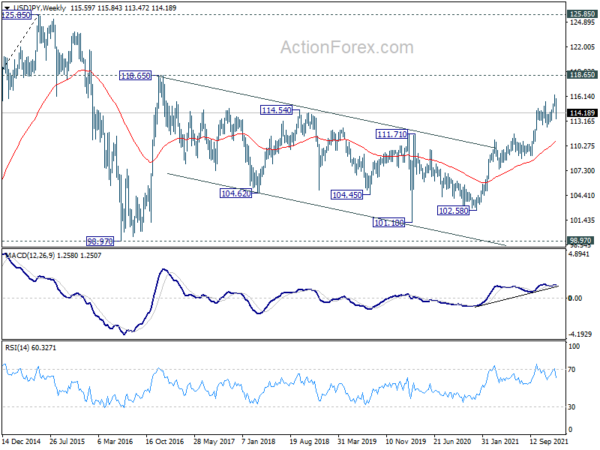 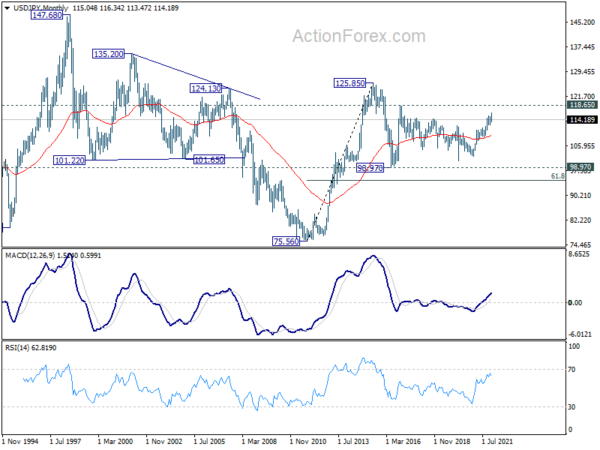