US equities turned positive on Wednesday after strong quarterly earnings by Morgan Stanley, Bank of America, and Procter & Gamble. The two banks published better-than-expected results, which were helped by the rising loan growth and investment banking revenues. P&G, on the other hand, reported strong revenues, helped by rising demand and prices. The company expects most of its costs will remain elevated in the first half of the year. The earnings season will continue later today, with the key companies to watch being Union Pacific, Fifth Third, Northern Trust, and Netflix.

The US dollar index retreated in the overnight session after the slight decline of bond yields. After soaring to a two-year high, the 10-year bond yield declined to 1.84% while the 30-year dropped to about 2.17%. The index declined even after relatively strong US housing starts and building permits data. The housing department said that housing starts rose from 1.678 million in November to 1.70 million. In the same period, the number of building permits increased from 1.71 million to 1.87 million. These numbers mean that the important housing sector is doing well.

The economic calendar will have some key events later today. Earlier on, the Australian Bureau of Statistics (ABS) reported strong jobs numbers. The country’s unemployment rate declined from 4.6% in November to 4.5% in December. Later today, Eurostat will publish the latest consumer inflation data. Economists expect the data to show that the headline CPI rose to 5.0% in December. These numbers will not have a major impact on the euro because in most months, they are in line with the first estimate.

Elsewhere, the Turkish central bank will deliver its interest rate decision later today. Analysts expect that the bank will leave its main interest rate unchanged at 14.0%. The decision comes a day after the country received a $5 billion loan from the United Arab Emirates. Other key numbers to watch will be the American initial jobless claims and the Philadelphia Fed manufacturing index.

The EURUSD pair crawled back during the American and Asian sessions. The pair is trading at 1.1335, which is slightly above the ascending trendline shown in yellow. It has also moved slightly below the important resistance at 1.1362. The pair is slightly below the 25-day moving average. It has also formed a small bearish flag pattern. Therefore, there is a possibility that it will have a bearish breakout later today. 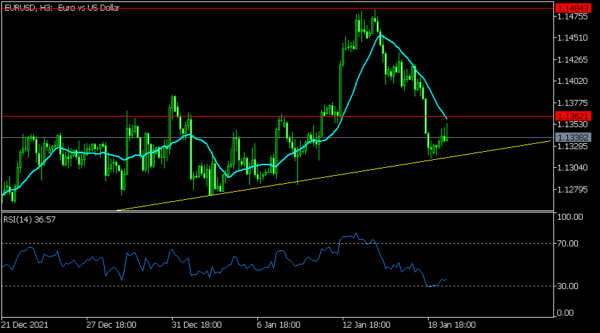 The EURCHF pair moved sideways in the overnight session. It is trading at 1.0395, which is a few points above yesterday’s low of 1.0373. On the four-hour chart, the pair has moved to the 61.8% Fibonacci retracement level. It is also between the lower and middle lines of the Bollinger Bands while the Average True Range (ATR) has been falling. Therefore, the pair will likely have a bearish breakout also. 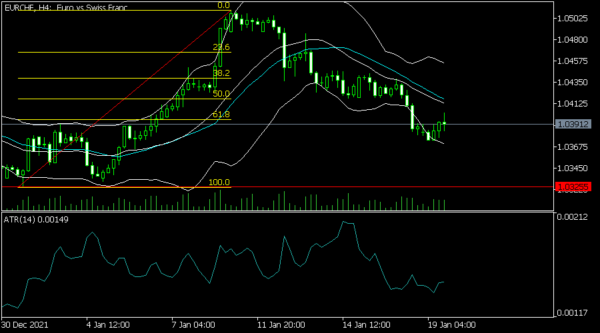 The XBRUSD pair continued its bullish trend ahead of the upcoming EIA inventories numbers. The pair is trading at 87.95, which is the highest it has been in seven years. It has moved above the 25-day and 50-day moving averages. Most importantly, it has risen above the key resistance level at 85.90, which was the highest level in October. Therefore, the pair will likely keep rising as investors eye 90. 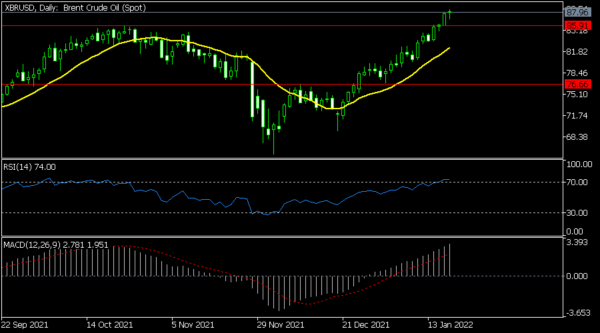