GBPJPY has been in a trading range since early January without being able to indicate a clear direction. Moreover, the pair has recently crossed below its 50-period simple moving average (SMA), indicating that negative forces might be gaining ground.

Short-term momentum indicators are reflecting a mixed picture as the RSI is located slightly below its 50 neutral mark. However, the MACD is found above its red signal line despite being in negative territory, which indicates that the negative momentum might be fading.

Should the bulls seize control, initial resistance might be found at the 156.06 level before buyers eye the 50-period SMA currently at 156.45. Crossing above the latter could open the door towards the congested region which includes the 157.34 and 157.72 obstacle. A break above this area could strengthen the pair’s positive momentum sending the price to test its October high at 158.20.

On the flip side, if the price breaks below the 155.43 hurdle, immediate support might be found at the 154.65 barrier. A break below that point could send the price to test its 200-period SMA currently at 153.70. A decisive move below the latter could increase selling pressures, sending the price to test the 152.62 level before sellers shift their attention towards the 151.10 obstacle.

In brief, the current outlook for the pair is neutral-to-bearish. To inject some fresh impetus into the price, a break above the 50-period SMA or a push below the 155.43 level is needed. 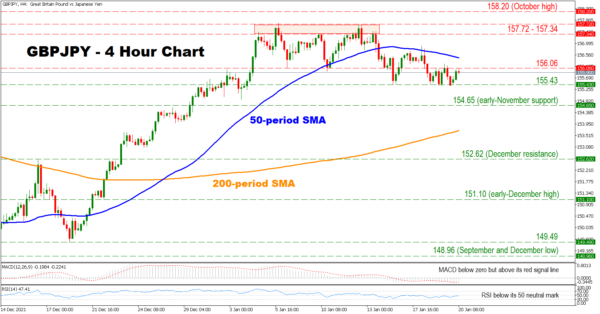