Swiss Franc, Dollar and Yen rise strongly today on risk-off sentiment as geopolitical tensions around Ukraine escalate. Aussie is currently the worst performing one, followed by Sterling and then Kiwi. Euro and Canadian are mixed. In the back ground, markets are also preparing for some hawkish comments from Fed later in the week to set the stage for the start of rate hike cycle in March. In other markets, cryptocurrencies are extending recent free fall. Silver weakens notably but Gold is steady. Oil is extending range trading. 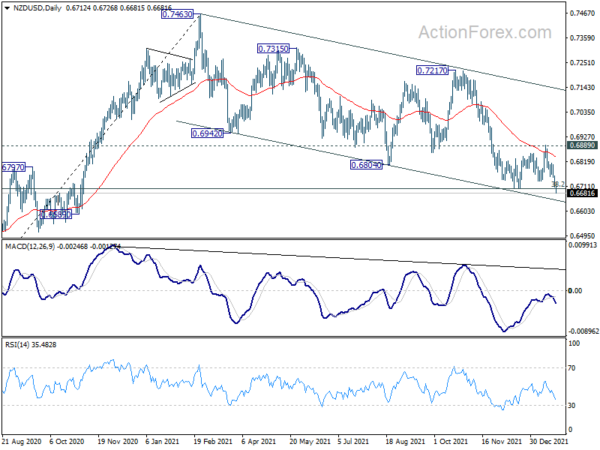 Chris Williamson, Chief Business Economist at IHS Markit, said: “A resilient rate of economic growth in the UK during January masks wide variations across different sectors. Consumer-facing businesses have been hit hard by Omicron and manufactures have reported a further worrying weakening of order book growth, but other business sectors have remained encouragingly robust.”

Chris Williamson, Chief Business Economist at IHS Markit said: “The Omicron wave has led to yet another steep drop in spending on many consumer-facing services at the start of the year, with tourism, travel and recreation especially hard hit. However, so far the overall impact on the wider economy appears relatively muted, and most encouraging is the further easing of manufacturing supply chain delays despite the renewed virus wave. Not only has the alleviating supply crunch helped factories boost production, but cost pressures in manufacturing have also moderated.

Phil Smith, Economics Associate Director, at IHS Markit said: “January’s flash PMI numbers came in comfortably above consensus to show a surprisingly resilient performance from the German economy at the start of the year… Manufacturing is expected to stage a recovery in 2022 as supply bottlenecks ease… January’s services numbers, showing activity recovering slightly after the decline at the end of last year, were another positive surprise… Still, rising costs remain a concern for businesses, with the survey data showing that input prices are continuing to rise sharply and on multiple fronts.”

Bundesbank said in the monthly report that real GDP grew by 2.7% in 2021, not enough to compensate the -4.50% contraction in 2020. It added, “setbacks caused by the pandemic and bottlenecks on the supply side dampened the recovery in the past year.”

Overall, prices was at an above-average rate of 3.2% in 2021. The factors driving up inflation are “also having an effect into the new year.” Bundesbank added, “the rate at the beginning of 2022 is likely to remain extraordinarily high….In addition, due to the significant rise in market quotations for natural gas, the corresponding end customer tariffs will be raised significantly.”

Joe Hayes, Senior Economist at IHS Markit said: “Given the surging number of daily COVID-19 cases we’ve seen in France, it’s no surprise to see softer PMI numbers in January…. Supply chain issues continue to impact the economy, particularly manufacturers, but we do appear to have seen the worst as delivery times lengthened to a far weaker extent than seen during much of 2021. That being said, the inflationary side effects remain in play and are being exacerbated by rising staff costs and energy prices.”

Japan PMI manufacturing ticked up to 54.6, services tumbled to 46.6

Usamah Bhatti, Economist at IHS Markit, said: “Flash PMI data indicated that activity at Japanese private sector businesses dipped into contraction territory for the first time in four months at the start of 2022. The pace of decline was modest, and led by the sharpest fall in services activity since August, while manufacturers commented on a slight quickening in output growth.”

Australia PMI Manufacturing dropped from 57.7 to 55.3 in January. PMI Services tumbled sharply from 55.1 to 45.0. PMI Composite also dropped from 54.9 to 45.3, first contraction follow three months of growth. All are at their 5-month low.

Jingyi Pan, Economics Associate Director at IHS Markit, said: “The Australian economy had slipped from a state of strong recovery in end-2021 to being affected by the surge in COVID-19 infections at the start of 2022… Supply issues meanwhile remained prevalent… This had led to input price inflation worsening Employment levels were unchanged.” 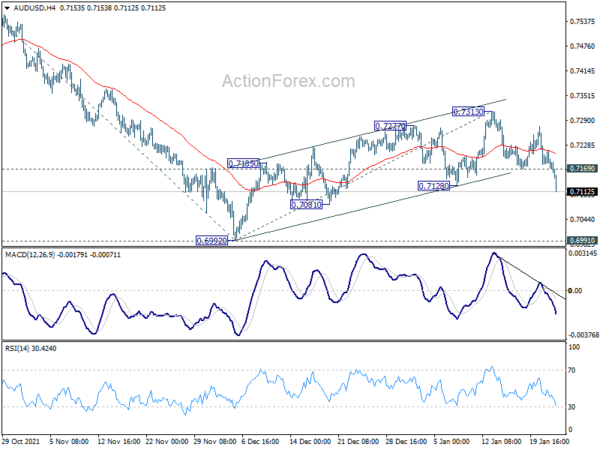