Week Ahead – Three Central Banks Meet ahead of US Jobs Report

A busy week lies ahead. The Bank of England is widely expected to raise rates, the European Central Bank is unlikely to signal anything new, but the Reserve Bank of Australia could try to dampen rate hike bets. Over in America, markets have almost fully priced in five Fed rate increases for this year, so the latest edition of nonfarm payrolls could determine whether the dollar still has some miles left in the tank.

The Bank of England will likely forge ahead with tightening monetary policy when it concludes its meeting on Thursday. Inflation is scorching hot, the labor market is strong, and the Omicron wave didn’t leave any scars on the economy according to the latest business surveys.

Therefore, markets have almost fully priced in a quarter-point rate increase, which would lift the Bank Rate to 0.5%. That’s the level which policymakers previously indicated as the threshold to begin shrinking the balance sheet. This means the BoE will no longer reinvest the bonds it holds when they mature, essentially draining liquidity out of the market. 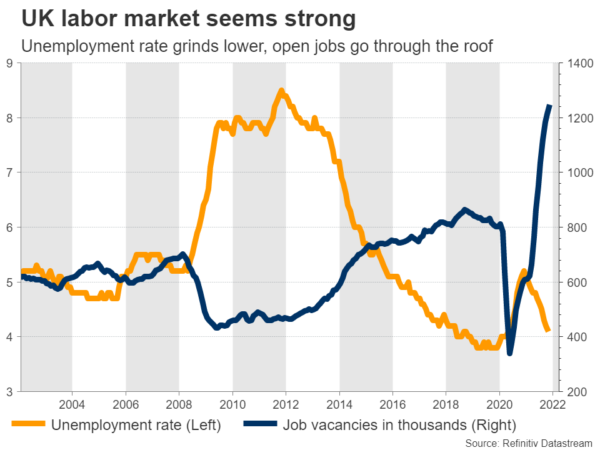 That would be great news for sterling as such a move argues for higher yields over time, widening rate differentials in its favor. Hence, if policymakers pull the trigger on balance sheet normalization and raise rates, the pound could enjoy the benefits. The updated inflation forecasts will also attract attention.

Across the Atlantic, there is a heavy barrage of economic data out of the US. The show will get rolling with the ISM manufacturing survey on Tuesday, before the services print on Thursday, and the all-important employment report on Friday.

Nonfarm payrolls are expected to clock in at 233k in January. That seems low compared to the more impressive prints last year, but a slowdown in jobs growth is natural as the economy approaches full employment. In fact, nonfarm payrolls might even be overshadowed by wage growth. 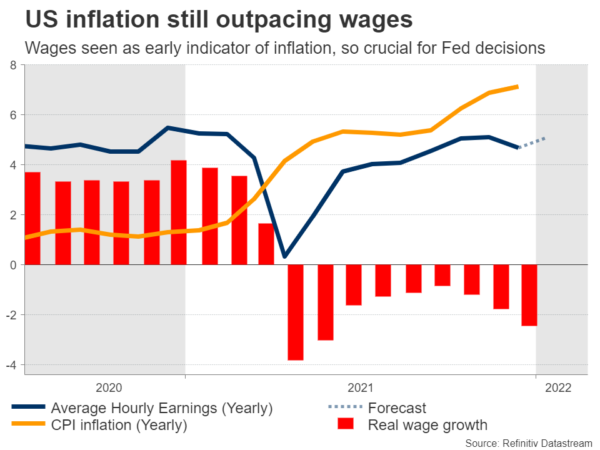 Fed officials worry that the economy could enter a vicious wage-price spiral that keeps feeding inflationary pressures, reminiscent of the 1980s. Hence, wage growth is seen as an early indicator of inflation, elevating its importance at this stage of the cycle.

Markets have almost fully priced in five rate increases for this year and a solid jobs report could add the finishing touches, keeping the wind in the dollar’s sails.

ECB – All about wages

The European Central Bank is not expected to signal anything new when it wraps up its own meeting on Thursday. Economic growth is stuck in slow gear and the labor market is still far from full employment, keeping wages subdued and therefore downplaying concerns of persistent inflation. 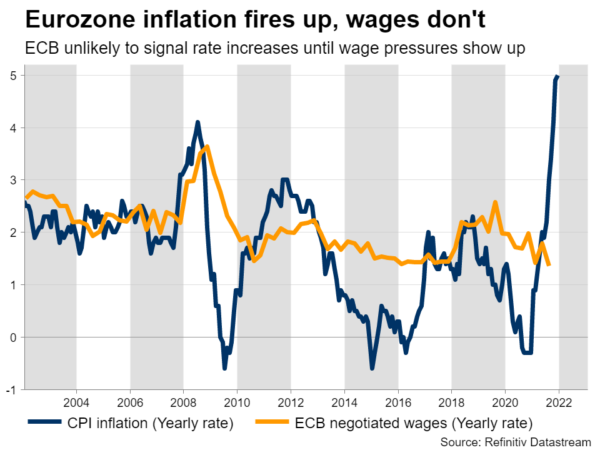 The ECB knows that even though inflation is elevated right now, it won’t stay that way unless wage growth fires up. There have been some encouraging signs lately with business surveys pointing to increasing wages, but nothing that would convince the central bank a paradigm shift is underway.

Even President Lagarde acknowledged this, saying ‘the cycle of economic recovery in the US is ahead of that in Europe, so we have every reason not to act as quickly and ruthlessly as one might imagine with the Fed’. This suggests the ECB will lag behind other major central banks in raising rates. 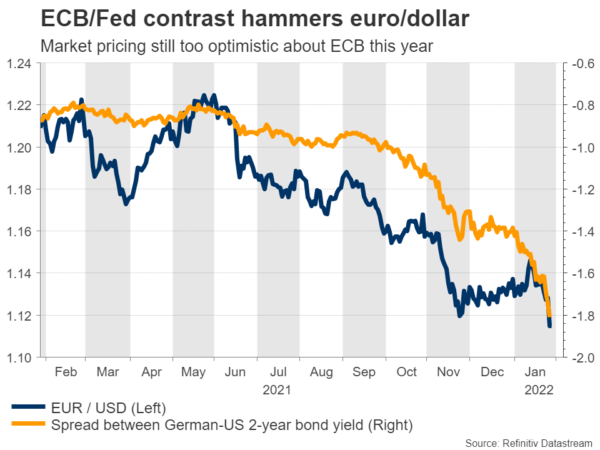 As such, the outlook for the euro remains negative. Money markets are still pricing in 20 basis points of rate hikes this year, which seems unrealistic and allows scope for disappointment. Political risk is back on the radar too. The possibility of early elections in Italy is growing, the French presidential election is approaching, and geopolitical tensions in Eastern Europe don’t seem to be cooling.

Ahead of the ECB meeting, there is a flurry of data releases, including preliminary GDP numbers for Q4 on Monday and the latest inflation stats on Wednesday.

The Australian economy has enjoyed a strong spell of growth in recent months, after the strict lockdowns were lifted. The labor market is now stronger than it was pre-pandemic, consumption has been solid, and inflationary pressures seem to be intensifying.

However, not everything is rosy. The latest PMIs suggest the Omicron outbreak restrained economic growth in January, and there’s a risk that the slowdown in China spills over into Australia given their close trading relationship. 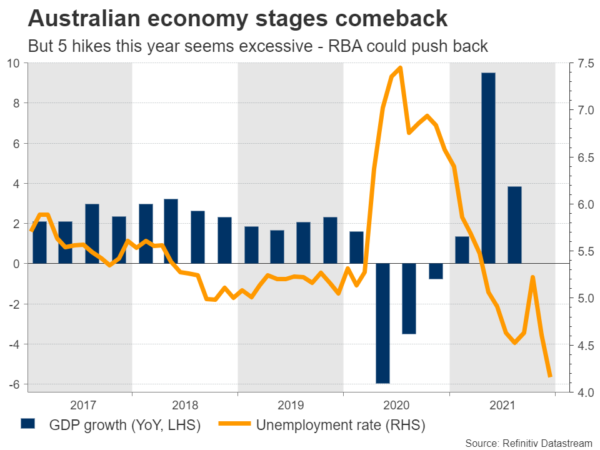 Therefore, the RBA will have to pull off a tough balancing act on Tuesday, signaling that the improvements in the economy suggest rates will likely rise this year, but also warning that the five rate hikes priced into markets are excessive. If they successfully push back against market pricing, the aussie could take another hit.

In neighboring New Zealand, the jobs report for Q4 will also be released on Tuesday. Meanwhile, China’s latest PMI surveys will be released over the weekend and could be crucial for both the aussie and kiwi. Chinese markets will remain closed for the entire week in celebration of the Lunar New Year.

Finally in Canada, GDP data for November will be released on Tuesday ahead of the employment report for January, scheduled for Friday. The loonie took a sharp hit this week after the Bank of Canada refrained from raising interest rates, disappointing market expectations. 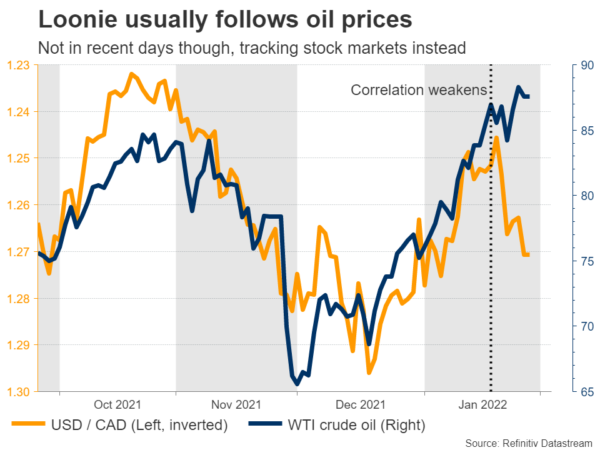 Yet the economy is booming and the central bank all but confirmed that rates will be raised with some force this year. At the moment, the loonie is driven entirely by risk sentiment, suffering alongside equity markets. But over time, it will likely realign itself with Canada’s strong economic fundamentals and roaring oil prices.

OPEC will meet on Wednesday and is expected to stick to its plan of gradual production increases, something that could give oil prices the green light to keep grinding higher.